Speaking of Jake Chapman, a few years ago I wrote a piece for the Guardian called Death of the Gallery. In it, I quoted Chapman lamenting the "commercialisation" of the Saatchi and Tate Modern galleries and their "increased sensitivity to a wider audience." This broadening of access would, he claimed, "de-skill the potential of serious, discursive art" and could have "a very negative effect on the production of art itself.”

I noted: "The modern art establishment seems gripped by the institutional equivalent of existential angst. The notion of the gallery as the sole repository of artistic integrity is being called into question… The aversion to being associated with the commercial world, except as an ironic commentary, could be viewed as a kind of ‘credibility anxiety’ - a fear among many artists that, should their work be stripped of its official artistic context, very little would remain.”

Galleries and curators long ago lost any exclusive claim to art’s cutting edge. If I think of objects and ideas that inspire fascination and a sense of the possible, I don’t think of galleries or the preposterous theorising of kitsch merchants like Mr Chapman. I think of the commercial world and the realm of R&D. I think, for instance, of Jeff Han, a research scientist for New York University's Courant Institute of Mathematical Sciences. In the clip below Han demonstrates his intuitive touch-driven interface before a suitably mesmerised audience.

"When you have initiatives like the $100 laptop, I kind of cringe at the idea that we're going to introduce a whole new generation of people to computing with the standard mouse and Windows pointer interface. This is something that I think is really the way we should be interacting with machines from this point on..."

Those with a taste for technicalities can learn more here. Everyone else can simply enjoy the performance and the very pretty pictures. A second showreel of multi-touch interaction can be found here. 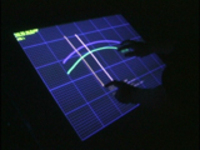 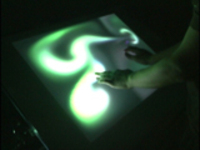 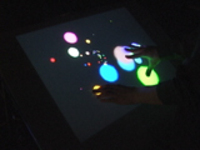 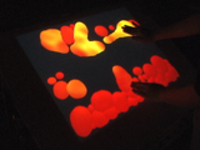 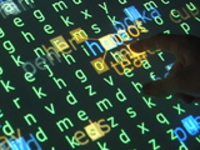 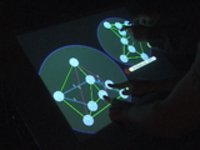 I never get tired of seeing Jeff demonstrate the multi-touch interface. It's mind-boggling and yet just seems completely natural. Ewan Spence did a great interview with Jeff last year at E-Tech.
http://techconf.thepodcastnetwork.com/2006/03/12/the-tech-conference-show-jeff-han-etech-004/

That is a phenomenal leap forward in interface design. The question is, does it come with a wet-nap side pocket so that I can enjoy fried chicken while 'interfacing'?

I think this baby might actually justify letting go of the chicken. You could always keep the bucket nearby, though. For comfort.

You, and Jeff Han for that matter, clearly underestimate my constant and insatiable needs for greasy fried chicken. All North Americans have this need. (Don't say you were not warned about the comments feature)

Hm. Then might I suggest paper towels, bought in bulk? And so far the comments have maintained a relatively civilised tone. I run a classy joint here.