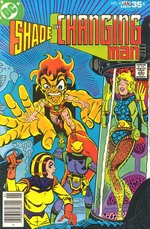 Steve Ditko is, along with Jack ‘King’ Kirby, one of the most important visual stylists in comic book art. A key architect of Marvel’s Silver Age, Ditko famously co-created Spider-Man and Dr Strange and shaped their formative adventures between 1962 and 1966. His dynamic approach to storytelling combines iconic character design, idiosyncratic body language and surreal ‘cosmic’ scenarios. But while Kirby is widely acclaimed as a major influence on contemporary comic aesthetics, Ditko remains a reclusive and cultish figure, shunning interviews and earning a reputation as “the Thomas Pynchon of comics.” Ditko also warrants attention for being the only comic book artist to be discussed as much for his political philosophy as for his distinctive illustrations.

The artistic troika of Ditko, Kirby and editor Stan Lee marked an unusually fertile period for the comic book; one fuelled largely by the notion of heroes whose personal lives would be as important (and improbable) as their crime-fighting adventures. Spider-Man in particular spent as much time agonising over girlfriends and his Aunt’s innumerable heart attacks as he did grappling with criminal kingpins and homicidal scientists. This soap opera device not only served to contrast the obligatory superhuman stunts, it also connected the characters with the adolescent dramas of their readers. From the landlord-beleaguered Fantastic Four to the civil rights reflections of the X-Men, ‘troubled’ heroes came to define Marvel’s house style.

By the end of Ditko’s relationship with Stan Lee and Marvel in 1966, Dr Strange and Spider-Man had reached a college campus audience and become pop-cultural icons. Indeed, Ditko’s unique aesthetic was so fundamental to the flavour and success of Dr Strange that no subsequent illustrator has been able to match the character’s enormous early appeal. (In October 1965, San Francisco hosted A Tribute to Dr Strange. This unlikely ‘happening’ combined costumed revellers and political activism with the psychedelic rock band Jefferson Airplane.)

Significantly, Ditko and Lee reportedly fell out over a plot detail of Spider-Man. Lee felt that a shocking revelation was required and insisted that the villainous Green Goblin should be revealed as the alter ego of one of the comic’s regular characters, ideally an otherwise sympathetic one. Appalled, Ditko argued that the Goblin had to be depicted as an anonymous, unredeemable lowlife, in accord with Ditko’s own sociological outlook. This aversion to moral ambiguity would inform Ditko’s most personal later work. An equally vehement distaste for editorial interference would likewise shape his career in general. Given Ditko’s chosen profession is one in which ownership of artists’ work remains a major area of dispute, Ditko’s uncompromising personality inevitably set him against the prevailing tide.

Ditko subsequently worked for a number of publishers, large and small, from Marvel’s main rival, DC, to Charlton Comics - the company that originally fostered his storytelling style, but which was known primarily for its dismal production values. Ditko would return to Charlton repeatedly, presumably for reasons of artistic freedom rather than financial reward, and some collectors regard his work there as among his finest. Ditko also worked for Witzend, an early underground home for artists alienated by their dealings with larger companies. 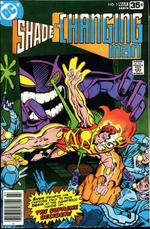 However, one of Ditko’s most memorable post-Marvel creations is Shade, the Changing Man, published by DC in June 1977. This regrettably short-lived series is one of Ditko’s most ambitious projects, and certainly his most baffling. A strange, erratic tale of inter-dimensional espionage and (literally) mind-warping underwear, Shade defies adequate summary or satisfactory explanation. It does, however, include some feverishly inventive visual ideas, thanks chiefly to the possibilities of Shade’s M-Vest, a piece of alien technology that induced fearsome hallucinations in those around him. The series is also famed for the Freudian nightmare of its central relationship - Shade is pursued by his homicidal former girlfriend - and for a number of inexplicable jumps in narrative.

Published at a time when DC seemed intent on conquering the market by sheer volume of titles (the so-called ‘DC explosion’), Shade may have slipped beneath the publisher’s editorial radar in the confusion. The company abruptly pulled the plug on Shade after only eight issues, possibly when someone in DC’s management actually read an issue or two and came to the conclusion that Ditko had himself lost his mind. (In 1990, Peter Milligan resurrected the character, albeit in a radically different form, for DC’s ‘adult-orientated’ Vertigo imprint. 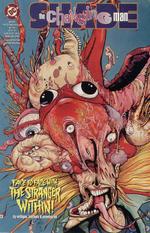 Unfortunately, Milligan’s self-conscious postmodernism stripped the title of much of its urgency and unhinged charm, while Chris Bachalo’s artwork paled beside Ditko’s fluid graphic mayhem.)

Ditko’s psychedelic artwork for Shade and Dr Strange held an obvious attraction for the titles’ counter-cultural readership. Tom Wolfe famously described the novelist and LSD adventurer Ken Kesey as spending “hours on end absorbed in the plunging purple shadows of Dr Strange…” However, the illustrator’s unfashionable politics were most likely a different matter. During the Sixties, Marvel’s moral tone relaxed to match that of its readership, unwinding from the Eisenhower-era Cold War. Ditko, however, turned towards a mix of Biblical portentousness and curmudgeonly libertarianism. Many of his later characters were little more than rhetorical conceits - vehicles for expounding the artist’s stark ruminations on crime and morality. With its inflexible absolutism, Ditko’s quasi-religious worldview jarred with the liberal relativism of the time.

These leanings found their most explicit expression in Ditko’s lesser-known 1970’s creations such as The Hawk and the Dove, The Question and, most notably, Mr A. The latter two were long-winded vigilantes whose adventures served merely as a pretext to echo the maxims of the ‘Objectivist’ author Ayn Rand. One Mr A story, titled Right to Kill, depicts Ditko’s Randian hero murdering one kidnapper before allowing the villain’s two colleagues to die. The abductors’ victim, a child, asks why his rescuer doesn’t help them too. Mr A promptly announces that only the innocent are deserving of help: “Only through black and white principals can man separate good from evil! Men can choose grey principals, to choose to be corrupt, but that choice only leads to evil and self-destruction!” Mr A’s polemical ‘adventures’ were, of course, printed in black and white. 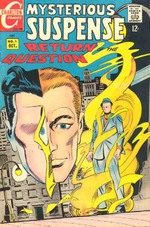 It’s fair to say that Ditko never entirely reconciled the notion of costumed altruism with a philosophy of overwrought social Darwinism. To highlight this practical contradiction, and by way of a riposte, Alan Moore and Dave Gibbons’ 1986 Watchmen series features a character named Rorschach, a dishevelled right-wing vigilante with similarly uncomplicated views – and with psychopathic tendencies to match.

The author and eminent Ditko aficionado Blake Bell runs a website documenting the artist’s work and influence. Interviewed in the Conservative Monitor, July 2002, Bell explained the conflict between Ditko’s art and ideology: “Unfortunately, Ditko became obsessed with [Objectivist] philosophy and it drowned out dramatic pretence in his stories. They became tracts, instead of narratives, perfect examples of the greatest sin of storytelling – ‘telling’ instead of ‘showing’. Given Ditko's attachment to a medium where one focuses on a main character, a hero, Ditko only focused on the already-perfect Randian protagonist, leaving no room for any intriguing character development. This is why his characters of the last 30 years are rarely memorable…”

In Rand’s 1957 bestseller Atlas Shrugged, her protagonist John Galt warns: “Do not let the hero in your soul perish.” Ironically, it was Ditko’s adherence to Rand’s worldview that would, in later years, undermine the inspirational impact of his heroic parables. While Ditko’s finest work invites the reader into a world of unknown spaces, bizarre possibilities and acrobatic movement, the didactic lectures of Mr A are in contrast stiff and static, leaving no space for uncertainty or intrigue.

Yet, whatever one’s view of Ditko’s politics, his standing as an emphatic storyteller and a truly original stylist is beyond doubt. While Mr A is notable today only as a dry and academic curio, Ditko’s Dr Strange and Shade, the Changing Man remain every bit as marvellous and outlandish as on the day they first appeared. Fans of comic art can be thankful that, for a short time at least, Ditko’s visual sensibilities mirrored his colourful heroes and triumphed over the artistic evils of ideological dogma.

An earlier version of this piece was published by Bookmunch, April 2004.

Update: For an enthusiastically Randian perspective on Ditko, see here.

Keep me in comics, please.

Hey Dave, I found your blog via the attention your recent entries regarding Islamic extremism have gotten and while it's been excellent reading, this particular entry about the great Steve Dikto is especially fascinating for me. I'm a Silver Age comic fan (of Dikto especially) as well as a Libertarian, so obviously this blog is right up my objectivist alley!