John Cuneo's forthcoming book, nEuROTIC, has been described as "hilarious and disgusting." It's also been referred to as "humorous erotica", though this collection of bizarre coloured sketches is, I think, likely to arouse only the most sensitised of fetishists. Cuneo's characters are plain everypeople, often overweight, and frequently distorted to surreal effect. Maybe whimsical depravity would be a better description. The book is, however, funny and oddly compelling. Not least in depicting a fully-dressed man being pursued by three triangular patches of disembodied pubic hair. 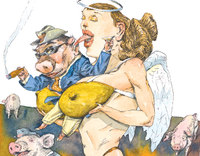 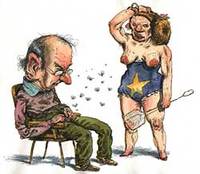 Those suitably intrigued can buy nEuROTIC immediately from the lovely people at Fantagraphics or wait until March 28th to get it from Amazon. In a plain brown cover, naturally.

Update: Apparently the notion of being pursued by disembodied pubic hair has aroused interest, hence the following.

Sadly, my first thought on reading that was of Benny Hill.

That Benny Hill was your first thought is, how shall I put this, troubling.

In my defence, it was more thoughts of scantily-clad young ladies being chased by Benny Hill than just of the man himself. I'm not sure whether that makes things better or not.

I believe it might be an unfortunate consequence of being a child of the '80s.

Yes, Matt. I'm sure it's all society's fault.