For the Love of God
Superhero Pornface

Something lighter today, I think. A visitor to this blog was puzzled by the comic book coverage here. “Why comics?” they asked. Well, it’s hard to explain the appeal of comics convincingly. Maybe it’s just a deep personal flaw and something one shouldn't speak of. I could, of course, ramble on about the aesthetics of the form and its potential for storytelling. But I think a lot of the appeal hinges on seeing improbable things. Outlandish things. To illustrate the point, here’s an extract from Silence, by Grant Morrison & Frank Quitely, from New X-Men #121.

Published in 2002 as part of Marvel’s ‘Nuff Said project, Silence has only one line of dialogue, uttered by Jean Grey in one of those “to be continued” moments. Before that, though, we see Jean and Emma venturing inside the mind of a comatose Cassandra Nova, intent on rescuing the Professor’s estranged consciousness from the clutches of his evil twin. Yes, I know. It’s a long story. But hopefully you’ll see why it’s an interesting issue. Maybe it’s the nods to Dali and Blake, or Emma’s hipflask and impeccable tailoring. Or maybe it’s just the sight of mutant foetuses brawling in the womb. 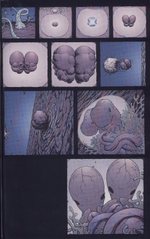 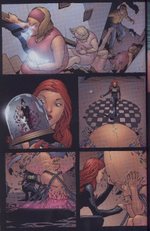 Oh, come on. Don't pretend you're not intrigued.

From my own empirical but limited studies I'd induce that comics go naturally with bright people because in addition to the abstract stimulation from complex matters and complicated stories (and more often than not a myriad characters with their own distinguished backgrounds and powers) which require the reader to juggle simultaneously with tons of dynamic parameters there's the "afterburner" from intense visual stimulation. Not surprisingly, a great many intellectual people are also into computer science and philosophy, though I don't want to imply that the result of such ventures always leads to truthful or sane insight. *cough* wackademics *cough*

Ah. So it's not just the purdy pictures then?

Rather. Although, Phoenix Endsong is the one I hide under my bed lest the Missus finds it. Still have a hard time explaining to her why an adult and father of one needs to read picture books, though, so I'll try Niko's take on this.

To your points: I would add that the gravitas and surreality of this episode is also juxtaposed with some funny slapstick and deadpan wit. It just works on so many levels.

I might add that as a side-effect of the above process far too many consumers of such literature develop a condition of mixing up comic worlds and reality - such when they attribute mind-control powers to Karl Rove, see the devil's hand in Cheney, and when they liken the Bush junta to a secret underground organisation (which may or may not begin with "Zionist") that seeks to control the world through amazing weaponry which, for instance, might penetrate an ambulance rooftop such that no combustion or collateral damage whatsoever occurs. In the olden days those irresponsible consumers of comics and fiction in general were called "nerds", typical habitat being colleges in either which position.

One might be inclined to induce that starting from a leftist perspective comic consumption should be proceeded with special care.

By the way, what's the latest word on Miller's "Holy Terror, Batman"?

So far as I know, Miller's 'Holy Terror' doesn't have a release date as yet. Should be interesting though, in much the same way that Warren Ellis' 'Iron Man: Extremis' is:

Speaking of Miller, I quite liked this:

“I draw and write comic books. One thing my job involves is making up bad guys. Imagining human villainy in all its forms. Now the real thing had showed up. The real thing murdered my neighbors. In my city. In my country... Patriotism, I now believe, isn’t some sentimental, old, conceit. It’s self-preservation. I believe patriotism is central to a nation’s survival.”

I hear embittered Socialists rending their garments as I type.

And I have visions of extended book burning all over the planet, unless Mr Miller happens to skip over the issues of the "I" and "M" words. Might as well named it "The Last Crusade".

And this was released just now at Hot Air:

"It’s part of Marvel’s stupid “Civil War” series, which takes on terrorism and Arab dictatorship by having superheroes fight amongst themselves over a government anti-secret-identity law. Captain America naturally leads the dissenters, thereby validating left-leaning nerd fantasies about who the real patriots are and the Resistance they’re all sure they’re part of."

What a strange coincidence.

Heh. I was just reading that over here:

Civil War was great to look at and utterly facile. It's difficult to express just how bad the final issue was. The problem is shoehorning leftist political grievances into characters or stories tends to make them boring and (dare I say it) implausible.

That's why Emma Frost is such a popular character. She's magnificently un-PC. (Well, the impeccable tailoring may be another reason for her appeal...)