Last week, I noted how the language of religious coercion has undergone a softening since the era of William Berkeley, and how old struggles for censorship and dominance are now routinely couched in the rhetoric of personal injury: “No-one would use words like 'authority' and 'power.' Not about Islam. Not out loud. Now we hear about much fluffier things, like 'feelings', 'prejudice' and 'sensitivity.' It's the passive-aggressive approach.” Efforts to control what can be said about Islam – and by extension what can be thought about it - have been recast in terms of supernatural sensitivity and an allergy to criticism. Or, no less shamefully, as a reaction to ‘racism.’

As, for instance, when the Abu Bakr Jamia mosque in Cambridge invoked a “compassionate and merciful” Allah to intimidate staff and students at a Cambridge college, while describing an innocuous student newspaper as “hate speech” and an “incitement to ethnic hatred.” Or when that tragicomic convert to Islam, Yvonne Ridley, pompously declared: “My faith is my nationality and when you attack it you are being racist.” Some have resorted to other, no less tendentious, ploys; most recently with the notion of “cultural racism” – a term that's used freely in certain quarters and without clear definition, but which nonetheless imprints on the reader an unmistakable suggestion of nefarious intent.

“The word ‘Islamophobe’ - like its pseudo-synonym, ‘racist’ - has acquired the status of a declamatory WMD. Deploying the term, even by vague insinuation, can generally be counted on to shut down the frontal lobes of pretty much anyone on the left, like some rhetorical kryptonite.” 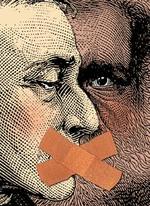 In his recent Civitas report, We're (Nearly) All Victims Now, the criminologist Dr David Green explains how, “politically-recognised victim status... has begun to do lasting harm to our liberal culture. Groups who have been politically recognised as victims are starting to use their power to silence people who have had the cheek to criticise them.” Green goes on to argue: “Modern victim groups create entrenched social divisions by defining opponents as oppressors who not only must be defeated by the state, but silenced by the state.”

These efforts to short-circuit realistic debate have proved all too successful, not least among those whose political outlook is premised on Designated Victim Groups and claims of collective guilt. It seems the word ‘Islamophobe’ - like its pseudo-synonym, ‘racist’ - has acquired the status of a declamatory WMD. Deploying the term, even by vague insinuation, can generally be counted on to shut down the frontal lobes of pretty much anyone on the left, like some rhetorical kryptonite. Loaded as the term 'Islamophobia' is with connotations of irrationality, those who brandish it as a talisman of virtue may suppose they’re defending the weaker party against unfair attack. In practice, they may simply be excusing the party with the weaker argument, or no argument at all.

Thanks to Franklin at Artblog, I stumbled across another textbook example of this passive-aggressive pantomime, this time involving the cartoonist Doug Marlette and his “offensive” cartoon ‘What Would Muhammad Drive?’ The background for the cartoon and the “outrage” that followed – inflamed and co-ordinated by the dubious “civil rights” organisation CAIR – can be found here. The piece is worth reading in full, not least for some tips on how to deal with being denounced as a tool of Satan. But I thought I’d share some of Marlette’s comments on the incident as they illustrate the mechanics of professional victimhood:

“Can you say ‘fatwa’? My newspaper, The Tallahassee Democrat, and I received more than 20,000 e-mails demanding an apology for misrepresenting the peace-loving religion of the Prophet Muhammad — or else. Some spelled out the ‘else’: death, mutilation, internet spam. ‘I will cut your fingers and put them in your mother's ass.’ ‘What you did, Mr. Dog, will cost you your life. Soon you will join the dogs . . . hahaha in hell.’ ‘Just wait . . . we will see you in hell with all Jews.’

The onslaught was orchestrated by an organization called the Council on American-Islamic Relations. CAIR bills itself as an ‘advocacy group.’ I was to discover that among the followers of Islam it advocated for were the men convicted of the 1993 bombing of the World Trade Centre. At any rate, its campaign against me included flash-floods of e-mail intended to shut down servers at my newspaper, as well as viruses aimed at my home computer. The controversy became a subject of newspaper editorials, columns, web logs, talk radio, and CNN. I was condemned on the front page of the Saudi publication Arab News by the secretary general of the Muslim World League.

The threads that connect CAIR and the literary fatwas… are entreaties to ‘sensitivity’, appeals to institutional guilt, and faith in a corporate culture of controversy avoidance. Niceness is the new face of censorship in this country… We are in deep trouble when victimhood becomes a sacrament, personal injury a point of pride, when irreverence is seen as a hate crime…”

It’s difficult to adequately convey the dishonesty of this flourishing grievance industry and the scoundrels who exploit it. But such is its effectiveness in coercing genuflection and self-censorship, a precedent has been set. As has previously been noted, the Bishop of London and the Dean of Southwark have all too readily embraced the rhetoric of victimhood practised so expertly by our most prominent Muslim lobby groups, whereby howls of bogus injury are accompanied by vague threats of “social disorder” and demands for special treatment.

Crudely summarised, that rhetoric runs along the following lines: “Poor us. Feel our pain. We’re victimised by words, even statements of fact. You owe us for our injury. So do as we say.” Perhaps we’ll soon have a grievance arms race on our hands, as various Tribes of Perpetual Hurt and Indignation follow the Islamic model and vie for the upper hand, with tears in their eyes and a list of unilateral demands: “Feel my pain.” “No, feel my pain!” “My pain is the greatest! Feel it! Feel it now…!” And with each exhortation to empathise and comply, a little more freedom may well be lost, perhaps irretrievably, along with a little more honesty and a little more self-respect.

Update: More of the same at Harry's Place. And over at Normblog.

They couldn't admit that Buchanan was right by even having Clinton go to the WTC and giving a speech or issuing warnings or responding to Steve Emerson's investigative reporting. Emerson did real investigative reporting not just talking to government officials as sources. Clinton let the 19 Muslims in as legal immigrants. When WTC 2001 and Pentagon occurred, they did nothing to stop Muslim immigration. They just predicted more terrorism and disrupted our lives.

"What Would Muhammad Drive?" That's easy. He would be driving your car, raping your wife, enslaving your children, and you? You would be dead. There is no fun in Islam and Muhammad drives whatever he wants, he's the prophet. Hand over your keys Infidel!

Michael Ovey wrote a disquisition of victimhood last year, entitled "Victim Chic? The Rhetoric of Victimhood". Ovey writes from with a legal and Christian perspective and all reasonable persons can find value in his POV -I hope.

Some excerpts and a link:

"The rhetoric of victimhood allows us to cast ourselves without qualification as victims, or as saviours of victims, while dramatising our chosen opponents as demonic without qualification." [..]
"Successfully projecting oneself or one's group as victim can result in legislative protection, or the barring from certain offices of one's opponents. Such successful projection can deflect criticism and minimize accountability. This role should concern Christians for two reasons, one relating to justice, one relating to temptation."

"Concerning justice, such successful posturing as victims risks encouraging a double injustice: the injustice that real victims have not received justice, and the injustice that those who do not deserve compassion as victims have received it. Such inversion of justice naturally concerns Christians. Proverbs 24:11–12 tells us that refusing to act for the oppressed risks God's anger, while Proverbs 24:24 describes the curse on those who state the wicked are innocent." [...]

"Where do we see victim claims at work? Such claims can be seen both in the individual and collective sphere. Vitz and others see some psychological practices as encouraging a victim-mentality culture in the United States, particularly in parent-child relations, to which one might add marriage and work. Yet, perhaps greater dangers lie at group or collective levels, because of the ready association with collective guilt and innocence." [...]

Thanks for the link; it's very interesting. There's more on the Designated Victim Group mentality (and the moral contortions that result) over here:

Again apostasy in Islam mandates a death penalty. If though a person criticises Islam for this, the Muslim response is immediately "there is no compulsion in religion". And so it goes on and on, whether it is the subjugation of women, the treatment of non-Muslims in Muslim nations, the Jihad, forced conversions to Islam etc.

It is the dual-faced nature of Islam, a totalitarian religious ideology that hides behind a few pacific Koranic suras to better camouflage its savage intent, that makes it a formidable enemy.

As to the question what would Mohammed drive? Probably a 4X4 taxi to better run over Infidels.

Mohammed would drive a school bus with a NAMBLA sticker on the back. I understand he really enjoys 9 year old girls, and boys.

They couldn't admit that Buchanan was right by even having Clinton go to the WTC and giving a speech or issuing warnings or responding to Steve Emerson's investigative reporting. Emerson did real investigative reporting not just talking to government officials as sources. Clinton let the 19 Muslims in as legal immigrants. When WTC 2001 and Pentagon occurred, they did nothing to stop Muslim immigration. They just predicted more terrorism and disrupted our lives.

There is nothing in the Koran that forbids images of Mohammed. Sure, you can't worship graven images, but that's a completely different matter. It was only when the Danish cartoon issues was trumped up in the Muslim world did Muslims suddenly discover that they offended by this. Trey Parker and Matt Stone noted this in a recent interview, pointing out that somehow reality in the world shifted. One of their early seasons contains a picture of Muhammad -- it was ok then. Suddenly, though, it's not ok now.

In any case, here is my contribution to Everybody Draw Mohammed Day:
http://blog.robertgraham.com/2010/05/test-of-honor-draw-muhammad-day.html