I recently pointed out how the Guardian’s deputy comment editor, Joseph Harker, has realised that if the meaning of certain words doesn’t support his argument or broad political stance then he can simply change what those words mean until they do support that argument, at least in dim light. Thus, Mr Harker can argue that “all white people are racist” while claiming that he can’t be a racist for saying so, on the basis that racism is, apparently, an exclusively Caucasian vice. Clearly, if one can redefine words to suit an existing argument, rather than rethink one’s argument to fit the meaning of words - or indeed reality – then this affords enormous opportunity, at least rhetorically.

It’s pretty clear from this unilateral definition that Harker isn’t against racism per se. Attentive readers will notice he’s not arguing for a reciprocal moral principle – i.e. that people shouldn’t be prejudged on the basis of their colour or country of origin. Instead, what we see is an expression of PC bigotry and contorted righteousness. It’s not too difficult to see how this linguistic contortion fits with certain kinds of role-play – pretentious victimhood on the one hand and narcissistic guilt fantasies on the other. Perpetuating this outlook might be politically useful to some leftist ideologues and opportunist pressure groups, but it isn’t clear how believing “all white people are racist” helps anyone see further than the colour of a person’s skin.

Harker isn’t alone in trying to present a human vice as an exclusively Caucasian one. His argument, such as it is, belongs to a line of postmodern thinking, whereby basic reciprocation and individual responsibility are sidelined in favour of Designated Oppressor Groups and Designated Victim Groups. Thus, virtue and vice depend not on what a particular person actually does, but on which group that person, or their distant ancestors, can be said to belong to. 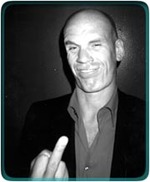 On a website page named ‘Facts’, the International Coalition for British Reparations claims, somewhat improbably: “Any student of world history will tell you that if he had to pick a single nation to pin all the world's troubles on, Britain is far and away the obvious choice.” The Coalition does, however, concede that, “Britain isn't behind all of the world's problems — at least not directly,” while maintaining, “all roads of human suffering, particularly in the 20th century, lead back to Britain.” This contention is supported by, among other things, a list of “bad inventions” - including “machine guns, slums, prisons, child labour, bad hygiene, the Black Plague, concentration camps, you name it.” The Coalition concludes, “If it hurts people, the British probably came up with it.” This righteous, if unreliable, endeavour is the creation of Steven A. Grasse, a “cultural studies analyst and media communications expert”, and the author of Evil Empire:101 Ways That Britain Ruined the World. Mr Grasse can be seen sharing his wisdom in the photo to the left.

With that in mind, I thought I’d share some comments by Tom Paine. He’s talking about the naval officers who were held hostage in Iran, but the point Paine makes – about “cultural cringe” - applies much more broadly. Not least, I think, to Mr Grasse, to certain deputy editors at the Guardian, and to quite a few of its readers:

“I am sure they know all about Britain’s ‘wicked’ imperial past. They will know everything of her role in the slave trade, save for abolishing it within her empire and then using her navy to suppress it elsewhere. They will not know that the Anti-Slavery Squadron of the navy in which they now serve liberated 160,000 slaves between 1811 and 1867 off the coast of Africa. They probably don't know the history of people abducted into slavery by Muslim rulers from British ships and English coastal towns. They will know, however, of every time their country has fallen short of the high standards set by Ghana, Nigeria or the Islamic world. They will also know, in their guts, that ‘Islamophobia’ is a terrible thing, though they will not be able to explain why.”

I wanted to thank you (I think it was you) for recommending Stephen Hicks's book 'Postmodernism: skepticism and socialism from Rousseau to Foucault' in an earlier thread. I ordered it on your recommendation.

Since it arrived I've only had chance to read it once, and I must confess that the first half had me reeling. I haven't felt so confused since maths lessons at school thirty years ago. The tour through the history of postmodernism's philosophical roots had me completely stumped. I was all right with Kant, but from Hegel onwards, each successive philosophers 'unique contribution' was, quite frankly, lost on me. I need to reread it again, in detail -- taking notes this time.

I might be denigrating the great philosophers of history, but the reason I think I had such a difficult time following the brilliance of their arguments, is that by and large, their 'Great Thoughts' seemed -- frankly -- quite trite. The kind of thing that would amuse you if you thought of it in the bath, around a pub table, or putting the world to rights with a bunch of stoned friends. But also, the kind of thing that you would pretty soon dismiss in the cold light of day as being totally impractical nonsense. Intellectual party games.

The second part of the book -- dealing with the development and history of postmodernism -- is excellent, and, for me, extremely revealing. The origins of lots of stupid ideas are suddenly starting to make sense. It's like seeing some up-and-coming new Indie band and thinking "Oh, I really like that" and then realising that it's almost a note-for-note rip-off of something I bounced around to to as a sprog.

As an artist, I'm always in favour of a picture, and the chart showing the 'evolution of socialist strategies' is a doozy. I think I'll have to scan it in and send it to everyone I know.

Yes, the book by Stephen Hicks is one of the best overviews of postmodern thought I’ve found. Even if the section on the movement’s philosophical lineage is a bit daunting, the later sections, on contemporary leftist ideas, is excellent. It’s a book I recommend quite often.

Incidentally, I’ve just tweaked the post above to include the International Coalition for British Reparations, who claim that “all roads of human suffering lead back to Britain.” Our “bad inventions” are to blame. Apparently, the British invented bad hygiene and the Black Plague. How evil we must be.

“…putting the world to rights with a bunch of stoned friends.”

The very idea. I’m shocked and scandalised. Really, I am.

P.S. I think this is a version of the diagram you mention.

Yes, visual aids help a lot. It’s funny too, in a grim kind of way.

Thank you for the link to the diagram. That saves me a job.

And thank you also for the link to the rather marvellous International Coalition for British Reparations. Utterly brilliant link. I really did think this was a piss-take, and was quietly congratulating the website designers until I saw the book and the trailer.

But hey, why let genuine historical facts get in the way of selling a book and earning a nice little pot of money. Even a casual reading of the intro is riddled with the most appalling inaccuracies.

According to the American author of this tripe the British invented the machine gun: which is very interesting, as only a cursory check of the facts reveals both Gatling and Maxim to be American. Maxim didn't even move to England until he was forty.

Some of his other targets are: British musicians who stole the souls of authentic blues-men like Robert Johnson (Er... not like Elvis Presley then); Kings and Queens (because, let's face it no other country throughout history has had kings and queens); child labour (?!?); burning Joan of Arc at the stake (Salem witch trials anyone); the evils of the metric system (invented by France and resisted by England for 170 years); slums (what the ****?).

I'll give him that we hooked the Chinese on opium; though his chain of reasoning that links opium abuse to communism is twaddle.

Idiocy of the highest order. But very funny.

I do try to keep my readers entertained as well as informed.

As an American, I feel a bit jealous. Surely the US is the "single nation to pin all the world's troubles on".

These guys seem to think so. Ah, bless.

Mr. Harker only proves that semi-human cloning has already been accomplished - using, perhaps, some of Karl Mark's frozen black cells? Who knew?

Harker should imediately go to Somolia and genuflect before the rebels and then on to Darfur, and then to a meeting with Hamas repeating his mantra

Joseph Harker said: "I cannot be racist, however, because in the global order I do not belong to the dominant group."

I've been hearing tripe like that here in NYC for decades. I don't know where this phony redefinition of "racism" originated, but I could believe that it was here. It's phony because the whole idea is to use the word for its commonly accepted meaning and force, while playing by the rules of a strategically tilted definition. Next, he'll tell you that he cannot be a hypocrite, a liar, a hatemonger, etc., because he is dominated. He's saying that his soul is a definitional sanctuary for any evil that incubates there.

Whatever the body count empire produced and all evils imagined or real, one can be reasonably certain it was much higher before the Brits arrived, then increased again after they gave those areas independence ;->