The Ed Wood of Comics

It isn’t easy to adequately summarise Fletcher Hanks’ comic book creations, or to convey their demented charm. Fletcher’s combination of weirdness and ineptitude has earned praise from Kurt Vonnegut and Robert Crumb and invited comparisons with the zero-budget film director Ed Wood. His characters - including Tabu, Wizard of the Jungle and a strapping lumberjack named Big Red McLane – spanned just three years of the Golden Age, from 1939 to 1941, and are among the most peculiar things I’ve found in a comic book. Which, all things considered, is saying something.

Imagine, for instance, a hero named Stardust the Super Wizard – a man with a crime-detecting laboratory on his own private star, and whose “vast knowledge of interplanetary science” makes him the “most remarkable man that ever lived.” In addition to these formidable attributes, our hero has other improbable talents. He changes size arbitrarily from one panel to the next; his limbs, head and torso swell and distend for no discernible reason beyond alarming lapses in draughtsmanship. When not racket-busting or camouflaging the Earth with a giant, sculpted cloud of steam, our hero operates his “violently vibrating crime-detectors” and tosses foreign-looking villains down the mouths of active volcanoes. He’s clearly quite a guy. 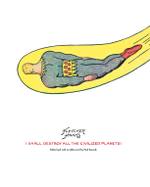 Hanks’ other characters are no less ruthless and outlandish. Fantomah, Mystery Woman of the Jungle is thought to be the first female superhero, predating Wonder Woman by several months. This fearless beauty can transform into to a brutish gray monster with a skeletal face and – incongruously – the same curly blonde hair. Fantomah’s list of abilities is apparently never-ending and remarkably inconsistent, with supernatural powers appearing and disappearing as each plot device demands. Fantomah shares Stardust’s hilariously wooden prose and taste for righteous brutality. In one instalment, our jungle heroine looks on with satisfaction as the villain of the piece is dismembered alive by apes.

Thankfully, fifteen of these unhinged adventures have been collected in a single volume by Paul Karasik, who adds his own illustrated account of how the book came about. I Shall Destroy All the Civilised Planets! is published August 1st and can be ordered from Amazon or direct from Fantagraphics. More cautious readers can sample the mind-shattering adventures of Stardust here, and click here for a taste of Fantomah, Mystery Woman of the Jungle. Readers are advised to approach with at least one eyebrow raised.

Stardust the Super Wizard is so bad it's good. A team-up immediately came to mind: Herbie, the Fat Fury. But what villain could possibly oppose the combined might two such titans?

I'd be curious about some of the less well known comics you've run across that were actually good. A couple that I liked were the Elementals, and Evangeline.

Clearly, Lepus the Fiend would be no match for our heroes.

Fletcher Hanks is regaining (regaining? did he ever achieve it?) prominence because he doesn't play by comic book "rules;" he plays by the meta-rules. Fletcher Hanks' strips reveal the excrement, the messy biology, of the American cultural body. Ignorance, paranoia, megalomania, blood-lust - this is what lies beneath the spandex. Superman is the super-ego; Stardust, the id.

(What's even scarier is I'm serious.)

Sorry...no eyebrows need be raised. Hanks work is good, solid storytelling (much more direct and comprehensible than most of today's tripe). It is also quite graphically beautiful.

If you are unfamiliar with it, I urge you to go to my website, go tothe BONUS page and see the slideshow of a Fantomah story that does NOT appear in the book, "I Shall Destroy All the Civilized Planets!"

A friend said to me that my comics remembered to him those of fletcher hanks.he came to visit today and I give the book to me. it is remarkable!

There are some other examples of barking-mad comic strips worth mentioning:

But this is an absolutely fantastic piece of madness from Fletcher Hanks: