A mobile in a microwave – what could possibly go wrong?

I’ve lifted these from today’s ephemera because they’re too good to miss. Walter Martin and Paloma Muñoz make limited edition snow globes with a difference. Instead of the usual uneventful winter scenes, these six-inch globes offer glimpses of intrigue and alarming goings-on. 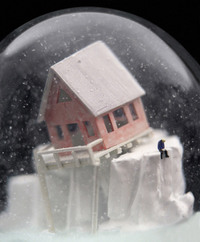 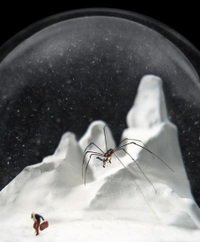 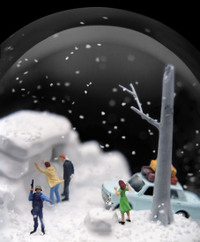 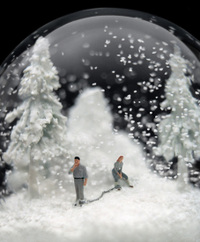 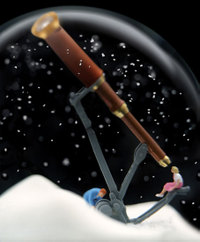 Experiments in the Revival of Organisms. Sergei Brukhonenko and the disembodied dog’s head. (1940) // Farming with dynamite. (1910) // From bull fights to ape rights. // Snow globes of note. // Rice paddy art. // Echochrome. A game of perspective. // The book of sleep. // The worst places to be a woman. // Dr Ahmad Al-Mub’i shares his thoughts on marriage. (h/t, Cookslaw.) // A map of the political blogosphere. // A timeline of internet memes. (h/t, Crooked Timber.) // Peter Risdon on Marxists, memes and benefit cheats. // Jihad on the dole. Your taxes at work. // Guardian hypocrisy shock. // Bill Blake on Grand Theft Auto IV. Missile launchers, temptation and vigilante strippers. // Photographed while driving. // “Come and play with us, Danny.” Kubrick analysed. // The art of the title sequence. // George Dyson on the birth of the computer. // Dish camouflage. // Big science. // The Tokyo Sky Tree. (h/t, 1+1=3.) // The aerodynamic Nubrella. // And, via The Thin Man, it’s Flanagan and Allen.

Matt Kirkland reveals the innards of some popular cuddly toys. Pooh, Elmo and Ernie are among the fluffy creatures stripped to their stumps and wires.

The Guardian’s Zoe Williams – whose wisdom is known to us – today asks her readers the burning question,

What prompts this question is the recent, rather baffling, fuss over an advert for Heinz mayonnaise. The Advertising Standards Authority has apparently received around 200 complaints, many of which concern the advert’s dénouement in which one man kisses another. The ad wasn’t shown during children’s programming  - due to the mortally harmful effects of full-fat mayonnaise - and has subsequently been withdrawn by Heinz UK. In light of such controversy, I feel obliged to share the offending advert with you. Brace yourselves.

Everybody okay? Now, the ad strikes me as innocuous and faintly amusing, and hardly malevolent or corrupting. (Though an image of Bernard Breslaw does, unfortunately, come to mind.) The ad isn’t even explicitly about a gay couple. The visual pun being that the husband is actually kissing his wife, who - thanks to her choice of mayonnaise - has acquired the zing and authenticity of a New York deli stereotype. However, the minor hoo-hah surrounding the ad leads Ms Williams to argue – indeed complain - that lefties don’t complain anywhere near as much as they should:

Behind-the-scenes. The physics. Via Coudal.

Last year, I wrote a short post titled It’s Okay to Dislike Islam. In it, I argued:

One of the creeping, unanalysed myths of our time is that it is somehow wrong to dislike Islam, or any part thereof, and wrong to take a dim view of its tenets and demands, and wrong to take a still dimmer view of the figure who founded it. I can practically hear the distant tutting and grunts of disapproval. Poor Islam. Poor Muslims. Their beliefs are being mocked. How hurtful. How “racist”. How terribly unfair.

No. It's not unfair at all. What’s unfair is a demand for unearned deference and a unilateral exemption from the testing of ideas. What’s unfair, indeed despicable, are efforts by Islamic groups to cow dissent and stifle criticism with a well-rehearsed pantomime of victimhood and the projection of false motives. Pretending to be hurt in order to assert one’s will over others, or to gain unreciprocated favours, or to exert control over what others may say and think, is cowardly and malign. Let me say that once again. It’s cowardly and malign.

At the time, I feared I might be stating the blindingly obvious. Thankfully, today’s Independent on Sunday suggests the sentiments above may still, to some, be novel. Peter Popham and Thais Portilho-Shrimpton apparently find it “astonishing” that an author, i.e. someone whose livelihood presupposes a freethinking society, should take a strong dislike to those aspects of Islam, often labelled Islamism, that are explicitly antithetical to a freethinking society:

The novelist Ian McEwan has launched an astonishingly strong attack on Islamism, saying that he “despises” it and accusing it of “wanting to create a society that I detest”. His words, in an interview with an Italian newspaper, could, in today's febrile legalistic climate, lay him open to being investigated for a “hate crime”.

At this point, perhaps it’s worth bearing in mind just what kind of world Islamist groups wish to share with us, whether we like it or not. Consider, for instance, the Muslim Brotherhood, perhaps the foremost Islamist group, which declares its aim as the “widespread implementation of Islam as a way of life; no longer to be sidelined as merely a religion.” In 2004, the Brotherhood’s president, Muhammad Mehdi Akef, told the Egyptian newspaper al-Arabi: “Islam will invade Europe and America because Islam has a mission.” Later the same year, Mehdi described the Holocaust as “a myth” and insisted that, when in power, the Brotherhood would not recognise Israel, whose demise he “expected soon”. Mehdi views “martyrdom operations” in Palestine and Iraq as a religious duty and has described all Israelis – including children - as “enemies of Islam”. The Brotherhood’s literature and website still bears the charming prophesy: “Islam will dominate the world.”

If some among us don’t find the above quite enough to warrant concern or contempt, perhaps we should remember the words of Ragab Hilal Hamida, a Brotherhood MP and former member of the jihadist group Jama’at al-Takfir Wa al-Hijra, who in 2006 told the Egyptian weekly Roz al-Yusouf: “Terrorism is not a curse when given its true [religious] meaning. From my point of view, bin Laden, al-Zawahiri and al-Zarqawi are not terrorists... I support all their activities.” When asked if such statements might reflect badly on the public perception of Islam, Hamida replied, “Islam does not need improvement of its image.”

In light of such statements, and many others like them, what is astonishing is the notion that a dislike of Islamism, or of Islam generally, should invite fears of “hate crime” investigation. As I’ve said before, religious freedom does not entail sparing believers any hint that others do not share their beliefs or indeed find them ludicrous. There is, after all, no corresponding obligation for believers to embrace ideas that are not clearly risible, monstrous or disgusting. But, again, perhaps I’m stating the obvious.

Barbie goes Hitchcock. // The obsessive-compulsive action figure. Comes with hypo-allergenic towelette. (h/t, Coudal.) // A floor plan of 221b Baker Street. // Underneath Berlin: the CIA’s secret tunnel. // Ancient cities of colour. // Viva Calaca! Dia de los Muertos. (h/t, Drawn!) // The elasticity of flesh. // Not a huge fan of tattoos. This one isn’t swaying me. // Electro-adhesive wall-climbing robot. // Balls. The cute, incredible change-bot. // Björk: Wanderlust, in 3D. Glasses not included. // Drug smuggling submarines. // How torpedo tubes work. // Turkish remake of The Exorcist. Budget not included. // “Only religious scholars should be allowed to discuss matters of faith.” (h/t, Cookslaw.) // Robert Spencer on the jihad against free speech. // Mark Pagel on race, reciprocation and the kindness of strangers. // How many cannibals could your body feed? // Evolving bacteria. // Synaesthesia on demand. // Tetris tactics. // The web text highlighter. // The thrill of vending machines. Why not make your own? // And, via The Thin Man, it’s the Balkan Hot Step.

Here’s a thing. Japanese surgeon Dr Norihiko Ishikawa demonstrates the precision of the da Vinci Surgical System by using its remote-control robotic arms to indulge in a spot of origami. The object he’s making – a crane – is about the size of a penny.

Related rather tenuously to yesterday’s comments:

A panoramic tour of the International Space Station. I can’t seem to find the sofa. Or the bar.

How long could you survive in the vacuum of space?

Kim Newman joins the Guardian’s film blog with a less-than-convincing defence of M Night Shyamalan’s latest offering, The Happening. As a riposte to the film’s poor takings and overwhelmingly bad press, the piece doesn’t start too well.

It’s an effective, mid-ranking genre picture. Mark Wahlberg isn’t the strongest leading man, but the rest of the cast are fine, and its puzzled, panicky characters act in a more or less credible manner.

Mid-ranking. Fine. More or less credible. Newman is already kicking the feet from under his own argument. It goes on,

And sometimes they’re just aggravatingly bad. The ending of Signs springs to mind as inexcusably lazy and contrived. Humanoid aliens descend on a blue planet whose surface is covered in water and whose atmosphere contains large amounts of water, only for those aliens to be revealed, abruptly and for no clear reason, as being laid low by… a glass of water. And this improbable lack of alien foresight restores the protagonist’s faith in a merciful deity. Truly, the Lord moves in bewildering ways.

He’s an earnest film-maker whose weird streak of humour doesn’t always work - a speech delivered by Wahlberg to a plastic plant just dies on screen - and he comes across personally as privileged, superior and faintly creepy (traits he’s well aware of, since he has used them in his own “significant” cameo appearances in film).

Having listed a dozen or so reasons to dislike Shyamalan’s recent efforts, Newman delivers the final, perhaps inevitable, defence:

Can it be a kind of racism that the Indian-born, Philadelphia-raised auteur is hammered for his apparent character (or funny name) rather more than, say, Quentin Tarantino or Spike Lee?

Ah. That’s obviously why The Sixth Sense was widely acclaimed and enormously successful and yet The Happening was not. It’s racism, see? And his funny name. Clearly, these are the things that govern the viewing decisions of a mainstream movie audience.

As a footnote to the disingenuous rumblings of Jakob Illeborg and assorted Muslim grandees, here’s Oliver Kamm, saying what needs to be said.

My argument was that having concern for the feelings of others - such as the sensibilities of Muslims offended by the Danish cartoons - should be no part of public policy. One aspect of the debate on free speech that I found particularly worrying was this:

The debate has not been aided – it has indeed been severely clouded – by an imprecise use of the term ‘respect’. If this is merely a metaphor for the free exercise of religious and political liberty, then it is an unexceptionable principle, but also an unclear and redundant usage. Respect for ideas and those who hold them is a different matter altogether. Ideas have no claim on our respect; they earn respect to the extent that they are able to withstand criticism.

The usage I'm criticising is a common part of the debate on free speech. Among innumerable examples, consider this well intentioned remark by a Danish Muslim, as reported by the BBC after the recent republication in Denmark of one of the offending cartoons:

“I am hurt, as I was the first time,” says Feisal, who works in marketing and was also born in Denmark. He believes the problem is not Danish society but the media. “The Danish press should have learned from their previous mistakes and the only thing the Muslims are asking for is respect, nothing else”.

It's not just that I believe Feisal’s requirement should be ignored by policy makers lest it lead to illiberal outcomes such as censorship of the press. I consider his position inherently unreasonable - as if “respect, nothing else” were some minimal demand…

It is a widespread notion that deeply held convictions are at least entitled to respect - when in reality there is no “at least” about it, and no entitlement either. The challenging of beliefs is an often brutal business, but the ensuing and almost inevitable hurt is emotional and not physical. There is nothing wrong in this; it is how knowledge advances.

Indeed. And despite its obviousness, I’m guessing the above will bear repeating.