Variety magazine recently announced the next project by former Marvel supremo Stan Lee: a cable TV drama about the travails of a gay superhero. As yet untitled, the hour-long programme is based on the novel Hero by Perry Moore, in which a novice crime fighter must contend with parental expectations, serial killers and his own sexual identity. Bearing in mind Lee’s previous efforts include the hypnotically awful reality show Who Wants to Be a Superhero?, expectations are no doubt high.

Homosexuality as a comic book plot device is hardly new, of course. Michael Chabon’s novel The Amazing Adventures of Kavalier & Clay, published in 2000, incorporated gay themes and symbolism, and, in September 2002, DC’s Green Lantern series swapped the familiar space opera for unrequited lust and a case of earthbound queer bashing. Given the superhero’s universe has always been populated by dashing young men with improbable physiques and vacuum-tight costumes, one might consider such storylines a little overdue. What seems surprising isn’t the exploration of homosexuality as a prominent narrative, but the fact that such stories took so long to surface in a mainstream comic. Although comic book creators have on the whole remained silent on the subject, the fetishistic symbolism of the costumed hero has long been registered elsewhere.

In 1954, New York psychiatrist Dr Fredric Wertham published Seduction of the Innocent, an apocalyptic assertion that comic books were morally corrosive to impressionable young minds and the primary cause of juvenile delinquency. Hysterical in tone and often bizarre, the book claimed comic publishers were using the medium to teach children how to steal, enabling them to buy more comics. Wertham famously suggested that Batman and Robin were obviously having a homosexual relationship and were therefore in need of “readjustment therapy”. Wertham also developed elaborate theories regarding Wonder Woman and her equally obvious leanings toward bondage and lesbianism. At the time, few people thought to comment on the good doctor’s apparent conviction that comic book heroes were somehow not only real, but also having paranormal sex lives beyond the printed page. 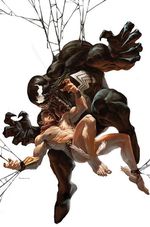 What, if anything, is controversial about comic books’ homoerotic content is merely its increasing visibility. Warren Ellis’ comic series The Authority is notable not only for its ambitious narrative sweep (depicting even God), but also in that it features two clearly gay male characters, the solar-powered Apollo and a masked vigilante named Midnighter. After months of are-they-aren’t-they intimation, the heroes were finally seen in a full-on clinch, their consummation making the instalment a best-selling collectors’ item. The first mainstream superhero to officially ‘come out’ was the Canadian crime-fighter Northstar. Bizarrely, Northstar announced his sexual orientation mid-battle, in the pages of Alpha Flight #105, published in March 1992. Gay themes and characters have since made further inroads into the comic book’s pages, despite a readership that remains largely one of ostensibly straight teenage males. However, while Vertigo’s Codename: Knockout offers much to titillate its straight male readership in the form of pneumatic female super-spy Angela St. Grace, her flamboyantly gay male sidekick, Go-Go Fiasco, usually has the best lines. Puzzling over alternative code-names, Fiasco suggests: “Boy Toy? No wait, Power Tool? Better yet, can I be Jawbreaker?”

If Codename: Knockout’s playful eroticism is undercut by fits of camp hour, some comics have taken their characters to darker extremes. Wolverine, the most popular member of Marvel’s best-selling X-Men, not only spends much of his time minus his costume, but also figures in an inexplicable number of sadomasochistic scenarios, the most controversial of which are the handiwork of writer Frank Tieri. In Wolverine #164, the hero is beaten, stripped naked, bound hand and foot, tossed down a well and imprisoned. The following issue finds our naked hero being hosed down vigorously by mocking guards, before being bound to a chair and tortured at length. The regenerating mutant has endured any number of baroque indignities over the years, including nipple biting and crucifixion. In a modern reflection of Dr Wertham’s moral anxiety, Tieri’s fondness for bound heroes and sadistic villains has led to accusations that the writer is turning mainstream comics into illustrated stroke books. Although Tieri’s stories are undoubtedly an acquired taste and not for the faint-hearted, he is perhaps merely making explicit a subtext that has lurked throughout the costumed hero’s 80-year history. Alex Ross, acclaimed for his neo-realistic painted covers, underlined this point with his artwork for a comic by the writers of Saturday Night Live, titled Ambiguously Gay Duo, and illustrator Greg Land has risen to notoriety with his use of quasi-pornographic photo-referencing.

The gay subtext of the superhero is no less apparent when translated to other media. With its jocks, prom queens and cloying puppy dog angst, the Smallville TV series is tailored to attract a certain kind of homosexual demographic. The show’s star may be wooden and dull, but the camera seems trapped in perpetual close orbit of this full-lipped farm boy and his cheekbones of steel. Even straight viewers have long since deduced that the pivotal love story is in fact between Clark and Lex. Likewise, the plot of Heroes seems increasingly determined by excuses for the equally ungifted Milo Ventimiglia to become separated from his shirt.

The acreage of straining male muscle found in the pages of mainstream comics may in part be due to the tastes of individual writers and artists, but the conventions and iconography of the superhero have always had an obvious resonance for homosexual readers. The attraction of powerful men swooping to the rescue needs little explanation and the masked hero’s secret identity - and the peril of its discovery - has been an unavoidable metaphor for generations of gay adolescents.

Is it me or does the guy hosing Wolverine down look a lot like George Michael?

A collection of dubious comic panels and covers can be found here:

It includes such nuggets as:

Are you writing a book on this topic, David?...

Um, I wasn’t planning to; though if anyone waved a cheque at me… And choosing the illustrations might be fun. Ahem.

Is it wrong to be turned on by Kon-El?
http://i213.photobucket.com/albums/cc160/julius999ph/KonEl.jpg

“Is it wrong to be turned on by Kon-El?”

"It includes such nuggets as: http://superdickery.com/images/stories/seduction/act337.jpg"

and a sluttier version-

This made The Secret Agent come to mind:

Not as camp, but the idea is still similar.

It’s no use trying to elevate this thread with poetry, Peter. We’ve already hit gags about water sports and unspecified sticky fluids.

Ah, but I have always liked the occasional futile gesture.