Readers with an interest in visual culture should visit the blog of Eye magazine. While you’re there, you could even take a minute or two to read my post on the art world’s rhetorical flummery:

Take artist Aliza Shvarts, for example, who rose to fleeting prominence last year with a work that purported to involve “repeated, self-induced miscarriages”. She described her efforts thus: “This piece – in its textual and sculptural forms – is meant to call into question the relationship between form and function as they converge on the body. The artwork exists as the verbal narrative you see above, as an installation that will take place in Green Hall, as a time-based performance, as a [sic] independent concept, as a myth and as a public discourse… It creates an ambiguity that isolates the locus of ontology to an act of readership.”

It isn’t clear how form or function can ‘converge’ on the body, not least because the human body is already a form with numerous functions. Can function, strictly speaking, ‘converge’ on anything at all? Can ambiguity be a ‘focus’ and ‘isolate’ something else – something that is terribly important but unclear and at no point explained? Despite such mysteries, one thing is unambiguous. Ms Shvarts believes that the extract above is itself a work of art: “The artwork exists as the verbal narrative you see above…”

By all means add your own. Previous mixtapes here, here and here.

Having noted this site’s frequent references to fine meat products, Anna thinks we should see how hot dogs are made. Brace yourself for the “liquid smoke shower” and alarming quantities of thick, pink slurry, otherwise known as “meat batter”.

Don’t look directly at it, children.

Dr Westerhaus alerts us to the Museum of Retro Technology and in particular this gallery of sound mirrors and acoustic location devices, used to detect enemy aircraft prior to the development of radar. 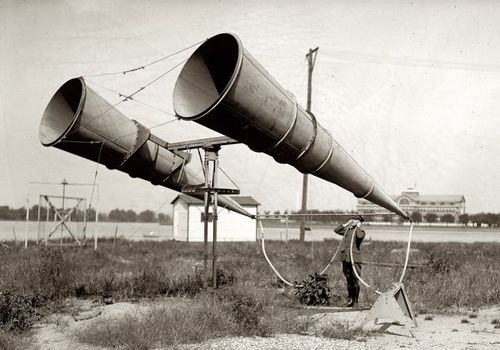 Related, and a little more discreet: Concealed hearing devices of the 19th century, including the amplifying vase and the acoustic beard.

Readers may recall Theo Hobson’s rather colourful assertions regarding James Bond. Among them, his belief that the implausibly competent fictional spy is

a deeply malign cultural presence. He represents a nasty, cowardly part of us that ought to have been killed off long ago.

Bond is a big factor in the sexual malfunction of our times; the difficulty we have finding life-long partners, and the normalisation of pornography.

Yesterday, one of Hobson’s Guardian colleagues turned her righteous disapproval to the subject of science fiction and its

A paucity demonstrated by the genre’s alleged inability to

create women who are not token geishas (or, given the genre, wild assassin women, escaping court hookers or muscly babes in bronze breastplates), non-white characters who are not noble magical heathens with psychic abilities and a strong connection to the earth, or perverted gay interplanetary warlords.

“Perverted gay interplanetary warlords” sounds promising and readers may wish to Google further and report back with their discoveries. However, the claim that the world of science fiction is inordinately populated by “homophobic white male straight writers” and “woman-hating racists” – none of whom are named - sits uneasily with the author’s admission that science fiction fandom is noted for its breadth and inclusivity and a propensity for discussing “sex, race, whatever.” Nor is it entirely consonant with her own extended list of suitably inclusive authors. Indeed, so extensive is this list, and so numerous are the writers and characters unfairly omitted from it, one might suppose the author of this article is intent on disproving her own premise. (One might even wonder if the real objection here is that some science fiction doesn’t yet comply with how she feels it ought to be. Which seems rather at odds with the title of her article, Planet Diversity.) The author also concedes that the popular series Battlestar Galactica is actually rather good, not least because its most interesting characters come in various ages, shapes and colours and are very often female. We are, however, told that for every BSG - or Buffy, or Voyager, or Firefly, or Alien - there’s

a homosocial all-male fantasy fest like the film Dark Knight.

Well, I too was disappointed by Chris Nolan’s overpraised, overlong Batman sequel and its glib ambiguities, but its grievous status as a “homosocial all-male fantasy fest” somehow escaped my notice. I shall, of course, try harder to detect such things in future. After all, the forces of patriarchal oppression are everywhere and eternal vigilance is required:

We should take it as given that sex, race and sexuality bigotry manifest in cultural works just as they do in society. Outrage against such bigotry is met with bafflement by apolitical people who simply don’t get what the big issue is and are too lazy and complacent to fight the status quo.

The animated, nay heroic, author of this article is Bidisha, a woman so unassuming she declares only one name and describes herself as “a non-white angry political female.” She also defines racism as, exclusively, “despising non-whites.” So no bigotry there. Those who’ve followed Bidisha’s penetrating insights will surely recall her no less remarkable assertions regarding the sexualisation of the Olympics and its “brutalising” and “devastating” effects on the male psyche.

The Voice of Conscience

Pilger is a voice of conscience I think the left still needs. Don’t get me wrong: I think he’s idealistic to the point of unrealistic. But commentators on the far-left are important as a voice that keep the centre-left on their toes, even if they are completely sectarian to a fault, unrealistic about how society should change, frequently illiberal and authoritarian and have no political punch. The point is you still need that voice of anger.

Here’s a taste of Mr Pilger’s idealistic anger, from the pages of the New Statesman:

Returning to Texas, I am struck again by those so unlike the redneck stereotype, in spite of the burden of a form of brainwashing placed on most Americans from a tender age: that theirs is the most superior society in the world, and all means are justified, including the spilling of copious blood, in maintaining that superiority.

No evidence is advanced to support this claim of “brainwashing” and no explanation is offered as to why so many actual Texans should have escaped its burdensome effects. Though the reader is left to presume that, however this brainwashing works, it leads inexorably to a presidential “blood fest” and the “killing [of] yet more brown-skinned people.” The same article also tells us that “Condoleezza Rice… has worked assiduously to deny the Palestinians justice” and states as fact “liberal democracy’s shift towards a corporate dictatorship.” Sadly, the particulars of such things are left to the reader’s wilder imaginings.

Wild imaginings are, of course, a signature of Mr Pilger’s rhetoric, along with the aforementioned anger and unrealism. As illustrated in December 2003 by his enthusiastic support of Ba’athist thugs and jihadist fantasists: “I think the resistance in Iraq is incredibly important for all of us. I think that we depend on the resistance to win so that other countries might not be attacked.” The precise nature of the “resistance” – its methods and lineage – didn’t seem to trouble Pilger; nor was he unduly concerned by the mismatch between that noble resistance and concepts of democracy, human rights, etc. One might, for instance, hesitate to champion the likes of Abu Musab al-Zarqawi, who in January 2005, a week before Iraq’s parliamentary election, said: “We have declared a bitter war against the principle of democracy and all those who seek to enact it.”

What mattered to Pilger, and mattered a great deal, was “deal[ing] a blow to the US Empire” – a point on which he was later happy to elaborate. Asked in January 2004 whether the “anti-war” movement should really be supporting al-Zarqawi and his associates, the Voice Of Conscience™ replied: “Yes, I do. We cannot afford to be choosy… We have no choice now but to support the resistance, for if the resistance fails, the Bush gang will attack another country. If they succeed, a grievous blow will be suffered by the Bush gang.” Two months later, Pilger described British, American and Australian troops as “legitimate targets” and revealed the true, fiendish scope of America’s ambitions: “Unless the United States is defeated [in Iraq], we’re likely to see an attack on Iran, we’re likely to see an attack on North Korea and all the way down the road it could be even an attack on China within a decade.”

China indeed. Based on the above, and much, much else besides, it isn’t clear how such a worldview could help those “brown-skinned people” who, reasonably enough, prefer democracy to despotism. One might, though, note that Mr Pilger is much more animated by the diabolical schemes he ascribes to America, with its designs on China and rampant “brainwashing,” than he is by, say, North Korea’s concentration camps and gas chambers.

Such is the voice of conscience. Hear it roar.

Obama’s inauguration has been covered at tremendous length elsewhere, but it would seem a tad churlish if I neglected it entirely. Here are two images of the proceedings taken by the GeoEye-1 satellite at around 11am EDT yesterday from a height of 423 miles. Click to enlarge. 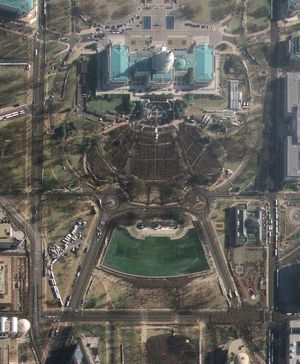 Several readers have steered my attention to the new Fake Charities website. It’s a directory of consultants, lobby groups and quangos that receive substantial funding from either the UK or EU governments, and thus from thee and me. One featured charity is Alcohol Concern, which, according to its 2007/08 accounts, received £515,000 from the Department of Health. It received just £4,991 in public donations. This dependence on state subsidy, as opposed to public donations, raises the question of just how independent such organisations are, and whether “charity” is the word we should be using.

Anna thinks some of you may be interested in a gallery of rolling papers and smoking paraphernalia, which includes products by Rizla, Abadie and numerous other brands. 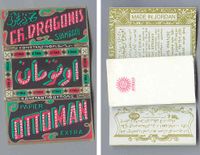 And, thanks to Candice, I’ve discovered a compendium of superpowers with somewhat limited applications. Among them: the ability to levitate the left side of your body, ultra short-range teleportation, and an imperviousness to helium.

Feel free to add your own suggestions in the comments.

It’s been such a long time since we’ve had a noisy condom gag. Behold Superfad’s advert for Durex:

There are, of course, behind-the-scenes outtakes.

Related: Indecent balloons. I told you this place was classy.

I’m not sure how long this will remain available online, but here’s Suzie Templeton’s 2006 stop-motion retelling of Prokofiev’s Peter and the Wolf. The detail, sets and character design are pretty marvellous and the film’s 29 minutes pass quickly. However, those of you familiar with the original story may raise an eyebrow at the reimagined ending, in which the wolf is released back into the wild – no doubt to resume his predatory ways - and the witless duck is presumably digested.