From Dan Meth, via Anna, comes The Trilogy Meter. 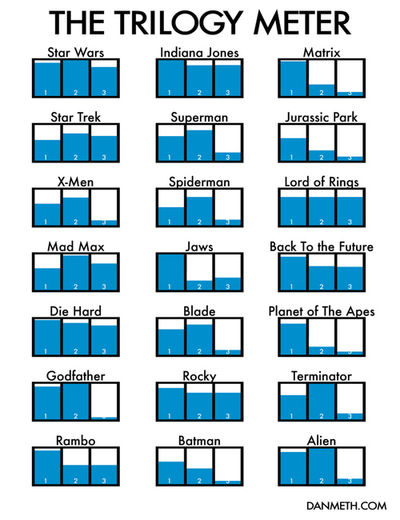 Feel free to take issue with the meter’s readings.

They Hum at Night 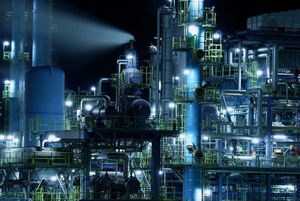 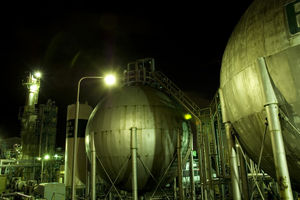 Via Dan, this is one of the funniest, most cringeworthy things I’ve seen this year. A six-day “occupation” of the NYU student centre food court today reached a gripping climax. Behold the magnificence of student activism:

The footage does, I think, provide plausible justification for having these whiny, pretentious people publicly beaten with lengths of copper piping: “Excuse me, brutality here… We need to look at the situation, the hierarchy, the power relationship…” So here we have a group of over-indulged poseurs who expect to be taken seriously by mouthing every conceivable cliché and fatuous trope they’ve managed to internalise. Just like thousands of other terribly “edgy” students. Not only that, they feel entitled to disrupt the university and other students’ work while coercing others to do as they demand – and all at someone else’s expense. Is that “social justice”? It’s so hard to keep track of these things. Will Mr Lotorto and his merry band be offering to pay for the disruption and damage caused by their “occupation”? Or will they go on whining and rubbing their metaphorical nipples?

Mike Edwards of CAFOD has written to the Telegraph to argue for a pragmatist perspective on the question of whether the establishment view on climate change is correct. In other words, we may as well assume it is correct, because the consequences of doing so are the ‘right’ ones.

The longer I work on climate change, the less important I think it is whether or not the warmists or the sceptics are right. [...] Imagine a world where we had listened to the climate scientists and started to change our resource-consuming behaviour and address the inequities of the global economic system. Although the warming still didn’t materialise, we would have addressed a host of environmental issues and be living a largely pollution-free existence. We may even be saying thank you to the climate scientists who, although they got it wrong, provided us the opportunity to create a cleaner, brighter and fairer world.

Unfortunately, it is easy to imagine that Dr Edwards is not unusual in believing that the preferred effects of particular research conclusions should influence those conclusions. The vast majority of ‘researchers’ seem to share a leftist ideological outlook these days, and also seem to share the belief that this perspective is indubitably the morally correct one, providing them with a spurious legitimacy for actions which would be considered questionable in other contexts. In some cases, this ideological bias - wanting research to support the creation of a ‘fairer’ world - may have effects only at the margin. For example, when a result is ambiguous, the choice of how to present it is made in the direction that is most supportive of the preferred belief system. Though individually small in effect, an accumulation of such minor biases at the margin can easily add up to something significant. In other cases, the bias is more blatant. Research results can often be guessed in advance, and those which would undermine the consensus can be avoided by the simple method of withholding financial support.

Truly, we live in an age of wonders. Anna steers our attention to GoGirl, a female urination device for ladies who prefer to remain upright. “GoGirl fits easily in your purse, pocket, or glove compartment. It’s a must for travel and sports. While the concept may be new to you, European women have used female urination devices for years. GoGirl’s not the first device of its kind. But try it. And we think you’ll agree it’s easily the best. Stop taking life sitting down!” 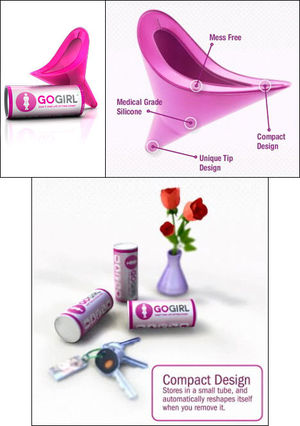 The GoGirl is “neat, discreet and hygienic” and comes with tissues and a splash guard. Also available: SheWee and ShePee. Avoid those questionable toilet seats and fight the patriarchy.

I frequently get criticised on here for taking a hardline stance on environmental issues, especially on supporting groups like Plane Stupid, because they’re seen as too alienating.

Hereabouts, Lily, Tilly, Joss and Leo are seen as self-preoccupied posh kids pretending to be radical by breaking into airports and disrupting the travel plans of thousands of passengers. And hence the alienation. Those unfamiliar with the theatrical fatuousness of Plane Stupid can marvel at their activities here. (See also the comments.) Note the readiness to draw flattering comparisons with Emmeline Pankhurst, Nelson Mandela and Rosa Parks. A longer list would doubtless include Gandhi, Neil Armstrong and the Tank Man of Tiananmen Square. (The comparison with Rosa Parks is particularly curious, since, as Mick Hume pointed out, “the mass movement against segregated transport that Ms Parks inspired demanded the freedom to travel as they saw fit, not the right to stop others doing so.”)

And given the group’s readiness to abandon conventional democratic protest in favour of criminal - and much more exciting – avenues, one has to wonder if Mr Hundal would be similarly well-disposed to other fringe groups with worldviews antithetical to his own, but which nonetheless deem their cause of such importance that discussion and legality can be dispensed with. Plane Stupid resorts to criminality because, they claim, their demands “aren’t being heard” and, therefore, “the democratic processes have failed.” (They also claim “aviation is mostly unnecessary.”) Though bearing in mind the high profile of environmental issues and the group’s sympathetic coverage in much of the left-leaning media, one might wonder if “not being heard” is in fact a euphemism for “not being agreed with,” which isn’t quite the same thing.

The Righteous One™ continues:

Because Middle England won’t agree, the argument goes, these people are a danger to the cause.

Note how those who don’t share Mr Hundal’s “hardline” enthusiasm for environmentalist vandals are waved away contemptuously as “Middle England.” But a dislike of Plane Stupid’s disruptive methods and freewheeling approach to facts isn’t confined to uptight ladies of the shires. The Sun – hardly a paper of choice for the bejeweled bourgeoisie – referred to Plane Stupid as “upper crusties,” with readers describing the group as “morons,” “wasters” and “pampered useless objects” who deserved “six months in jail” and “a bloody good thrashing.” The group’s spokeswoman, Lily Kember, was singled out for attention as a “snotty little cow.” So at what point exactly does the Sun readership become “Middle England”? Is it perhaps the point at which they start to disagree with Mr Hundal and his fellow Guardianistas? Is that when the working class becomes the enemy of the left?

I’ve noted before how some people weigh their activist credentials by the annoyance they arouse, often deliberately, while dismissing the irritation as symptomatic of exposure to the Daily Mail. The degree of inconvenience and subsequent hostility can then be taken as evidence of one’s own righteousness and a cause for satisfaction. As if on cue:

Environmental issues is one area where I don’t yield much, and frankly when people snort angrily about Plane Stupid that gives me even more pleasure.

Though not, I suspect, quite as much pleasure as Mr Hundal’s own extensive air travel adventures, which were excitedly announced shortly before his declaration of support for Plane Stupid: “Honestly, I love these guys.” Now I’ve no objection at all to people flying halfway around the planet, twice, as Mr Hundal did, to India then California, but I’m not the one declaring my “hardline” green credentials.

In my experience, the exceptionally clever are not ‘crazy’ in any meaningful sense of that word, at least not the functional ones. They are just not particularly good at office politics, which is something you need to be brilliant at in modern academia to avoid being marginalised. To be good at something requires you to be interested in it. Being interested in (say) the frontiers of theoretical physics is relatively incompatible with being interested in the machinations of a professional hierarchy. And vice versa - which may be why modern scientists tend to be dull, if by ‘dull’ you mean incapable of having an original thought.

Ophelia Benson notes how “defamation” is being slyly redefined.

Critics of Islam, however reasonable, also know they are likely to fall foul of people who have, as Kenan Malik says, internalized this idea that criticism of Islam is (1) taboo and (2) in and of itself ‘defamation’. As I mentioned, the copy editor for Does God Hate Women? flagged up ‘possible defamation’ in eight places. What I didn’t spell out (but you probably guessed) is that all the items cited were simply criticism, with arguments and evidence, of a kind that is utterly taken for granted in ordinary public discourse. They were not in any normal sense ‘defamation’ – it’s just that they were not flattering. The copy editor seems to have made exactly the leap that some protectors of religion would like everyone to make, and equated frank criticism of religious ideas and practices with ‘defamation’. The copy editor seems to have drawn the conclusion that frank criticism of Islam (as I noted, there were no such queries about other religions, which got their share of criticism) is somehow illegitimate.

And Edmund Standing reads the Qur’an. He isn’t terribly impressed.

These are clearly not the writings of a rational mind. Deranged by religious delusions, the author or authors of these passages would no doubt be considered mentally ill or psychologically unbalanced were this ‘holy’ book to be written today. Yet, as a religious text, the Qur’an is all too often given a special exemption from normal criticism, and we are told that we must show it ‘respect’, despite the hateful attitude it takes towards those who do not accept Islam. Around the world, children are taught to revere the Qur’an as the very words of the creator of the universe, as a perfect book with a timeless message, yet how can texts like those I have just cited do anything but instill a negative or contemptuous attitude towards non-Muslims? And why would anyone in their right mind claim that this book should be held up as the most important book ever written, or even as a great work of literature?

Busy today, but readers with an interest in free music may want to take a look at Spotify, which has an impressive library of tracks for online listening. As usual, feel free to poke about in the archives and greatest hits. See also mixtapes 1, 2, 3 and 4.