Further to this, today’s Telegraph has an extract from Hyok Kang’s account of his childhood in 1990s North Korea, This Is Paradise!

I was born on April 20 1986 in a village not far from Onsong, a city of 300,000 inhabitants in the north-east of the People’s Democratic Republic of Korea, close to the Chinese border and Siberia. The city is divided into ku (districts) and ban (classifications) of 20 families. My parents lived in ban number three, in a semi-rural zone. The house was like dozens of others built on the same model and lined up in rows. There was a door, a single window, and a roof of curved orange tiles. The walls were white, but they had been painted blue to a height that I must have passed about the age of eight or nine. Each time the district officials came to check the hygiene of the houses, as they regularly did, they ordered us to change the colour of this lower part: to green, now blue, now light brown, but all the houses in our ban had to be the same colour; perhaps because dwellings, like everything else in North Korea, are the property of the people. That means that nothing belongs to anyone.

Via sk60, The Vice Guide to North Korea is worth watching. Shane Smith pays a visit to Pyongyang. Surrealism ensues. Part 1 is embedded below.

Context is for weaklings. // Transforminators. // Cyborgery. // What’s inside your refrigerator? (h/t, Maggie’s Farm) // Gin and Titonic. // Hellingly Asylum. // Children of the race-class-gender church. // Department of bandsaw skillz. (h/t, Maggie’s Farm) // Skiing and chess, together at last. // How the Ear Functions. (1940) // Assorted medical antiques. // Assorted interchanges. // Chairs from The Incredibles. // Glowing inflatable furniture. // An ugly wooden lamp. // Rooks and hooks. // “All the animations seen in this video were created in camera.” // And, via The Thin Man, it’s Mr John Morris & Mr Mel Brooks.

It’s been several months since we last sampled Extensions: the Online Journal of Embodiment & Technology and I feel it’s time we once again bathed in its countercultural glow. Today’s offering comes courtesy of the artist and educator José Carlos Teixeira, whose work is “mostly focused on video, installation, and performance” and, naturally, addresses issues of pressing social import. Specifically,

Issues related to language, cultural identity formation, human dislocation, boundaries of personal and social spaces, and the definition of physical and psychic territory by using strategies of collaboration and group performance.

Mr Teixeira completed a Master of Fine Arts degree in “Interdisciplinary Studio” at the University of California, Los Angeles and has been a recipient of the Fulbright / Carmona & Costa Foundation Grant, the Gulbenkian / FLAD Grant, the Samuel Booth Award, and UCLA Fellowships. The issue-addressing artwork featured in Extensions - titled It’s OK (united) #1 #2 #3 – three steps to a (r)evolution - is described as follows:

A video project that takes its departure from a critical reflection around dominant educational, socio-cultural and political premises in the West. The case of the United States seemed to be the most meaningful for me – not only because it is currently the country where I live and work (reinforcing the site-specificity quite prevalent in my videos), but also due to its paradigmatic and hegemonic nature.

After sharing a ponderous quote by the late Edward Said, Mr Teixeira explains the origins of this profound socio-cultural project:

It's OK (united) was born during my trips on the bus, in the metro rail system, and sometimes while I was driving to different parts of the city of Los Angeles… As a repetitive common saying, [“It’s OK”] encapsulated paradoxes and contradictions, be it in the form of electoral results, in the state of war, in the lack of equality and freedom, in the discrimination and mutual racism I could witness almost every day.

Let’s see. Said, hegemony, paradoxes, contradictions, electoral results… War, equality, discrimination, racism… Human dislocation, social spaces, cultural identity, physical and psychic territory… Plenty of themes to draw on there and no shortage of looming gravitas. This must be building up to something ambitious, something vast. All that’s missing are some vague and dutiful references to globalisation, subversion and “The Other.”

Also, I was bringing up the question of what type of limits we have in the process of negotiation with the Other.

Truly, the stuff of nightmares.

From The Dogway Melody, directed by Zion Myers and Jules White, 1930. Via PCL LinkDump.

Yes, I know, you want the whole thing.

Between 1988 and 1991, Daniel Laine visited the African continent, photographing its various tribal monarchs and assorted royalty. 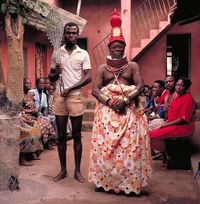 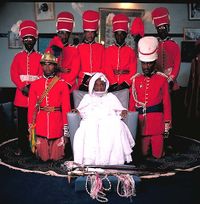 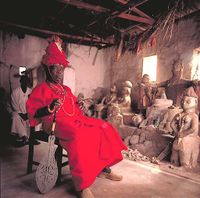 From the book African Kings: Portraits of a Disappearing Era. Via Coudal.

Tim Cavanaugh recently noted the tradition of grafting highbrow socio-political subtexts onto lowbrow zombie films, often regardless of the film makers’ intentions. As, for instance, when the film historian Sumiko Higashi saw the Vietnam War lurking somewhere among the zombies and wrote that although “there are no Vietnamese in Night of the Living Dead... they constitute an absent presence whose significance can be understood if narrative is construed.” Or when cineaste Robin Wood informed readers that the zombies’ cannibalistic tendency “represents the ultimate in possessiveness, hence the logical end of human relations under capitalism.”

I’m not a great fan of the zombie genre and a little flesh-eating goes an awfully long way. But it seems to me that with a couple of exceptions, most notably Homecoming, such lofty critiques are misplaced and say more about the critics and their politics than the films being discussed or the audience that watches them. Even the more, er, distinguished zombie films, including George Romero’s Night of the Living Dead, are at best a kind of coarse nihilistic satire, in which all values are upturned with adolescent glee.

Shannon Love offers a less grandiose explanation for the lingering appeal of the walking dead:

I think most modern literary criticism seeks to exploit the analysis for political purposes instead of seeking to understand why and how the artist chose to tell the story as he did. The critics avoid trivial but true explanations and instead grasp at exotic but false ones solely to gain attention for themselves and their pet causes. Why would anyone need to presume that people find zombies scary out of some broader contemporary social or political phenomenon? The modern zombie created in George A. Romero’s Night of the Living Dead encapsulates many core human fears. Fear of the dead. Fear of a painful death. Fear of decaying flesh. Fear of contagious disease. Fear of betrayal. Fear of a loss of social order and support. Is there any social or political milieu or even any culture ever in which masses of nigh-indestructible ambulatory dead people trying to eat people alive is not a frightening thought? Even cultures that mummify the dead and keep them around would find the idea that grandpa’s corpse could come alive and eat the family disturbing…

Zombie stories (and most survival horror or science fiction) also appeal to us as parables about cooperation. Beyond the physical excitement of the zombies themselves, a zombie story’s main drama evolves out of the conflicts between the survivors. The beleaguered survivors must organize themselves and cooperate to escape the zombie menace and all zombie stories spend most of their time examining that process.[…]

Sometimes a cigar is just a cigar and a zombie is just a zombie. People like zombie movies because zombies and the apocalyptic you’re-all-on-your-own setting they come with is genuinely horrifying. You can easily write interesting variations around the basic theme. Financially, zombies are cheap monsters and isolated farm houses are cheap places to film. Cheap, horrifying monsters explains the appeal of zombies for both film makers and their audiences, not tortuous allegories or appeals to zeitgeist.

As if to prove the point about shoestrings, British director Marc Price has apparently been turning heads at Cannes with his ultra-low budget zombie film, Colin. Price’s production company, Nowhere Fast, recruited aspiring zombies via Facebook and assembled the film over 18 months and for a mere $70. If you’ve a taste for lumbering reanimated flesh, by all means watch the trailer.

Oliver Kamm on the inversions of being “progressive”:

Notions once considered reactionary, even extreme, have insinuated themselves into the mainstream of right-thinking (that is, left-thinking) social idealism. When you encountered someone of professed left-of-centre opinions, you used to be able to draw broad but important, and generally reliable, inferences about what these entailed. They included, at a minimum, commitments to secularism, freedom of expression, individual liberty against collective authority, women’s rights, homosexual equality and the combating of xenophobia. Times have changed. Now these stances are unusual, even heterodox. […]

When, last year, suicide bombers attacked the Danish Embassy in Pakistan, killing six people and wounding more than 20, a Danish journalist writing for The Guardian commented that the attack was “of course, indefensible, but it raises questions about the wisdom of the much-debated cartoons and Danish reactions to Muslim wrath.”

(For more on the Guardian journalist in question and his “of course, but” manoeuvre, see, for instance, this.)

The “of course, but” formulation is worse than a dreary cliché. It indicates a liberalism evacuated of content. Those who prize social unity and order will tend to believe that people’s deepest feelings and beliefs should be accorded respect. But respect for ideas is never an entitlement. It depends on their intellectual resilience in public debate. No free society can treat people’s deepest beliefs as sacrosanct. They are fair game for hostile and derisive criticism. That is how knowledge advances. […]

No one has a right to the protection of feelings. If politics concerns itself with mental states, there is no limit to how far legislation can intrude on people’s lives. The task of progressive politics is to protect liberty, not least by attacking the accumulation of bad ideas. Yet to many on the Left, the individual, inquiring mind is of far less importance than the representation of designated groups.

How it was made. And remember, it’s just an advert for a TV.

Levitation, explosions, bare-chested fisticuffs... Why, it must be Sherlock Holmes.

That kind of thing never happened to Jeremy Brett. Holmes purists will no doubt be inhaling with alarm, but I quite like the look of it.

Over at The Augean Stables, Richard Landes has some interesting commentary on my recent discussion with Stephen Hicks. Well worth reading.

Among the terms used to search this site is the phrase “well-heeled class warrior.” The results of that search include several references to the Guardian’s associate editor, Seumas Milne, whose disregard for reality and repeated attempts to mislead will be familiar to regular readers. While Milne is incorrigible in his evasions and distortions, it’s perhaps unfair to single him out as uniquely hypocritical. Plenty of Milne’s colleagues could vie for the title quoted above. Among them, Milne’s employer, Guardian editor Alan Rusbridger, whose prodigious capacity for hypocrisy was revealed in this exchange with Piers Morgan, from which the following is but an appetiser:

PM: In the Guardian, you never stop banging on about fat cats. Do you think that your readers would be pleased to hear that you earned £520,000 last year? Are you worth it?

AR: That’s for others to say.

PM: Do you ever get awkward moments when your bonus gets published? Do you wince and think, “Oh dear, Polly Toynbee’s not going to like this one”?

PM: Or is Polly raking in so much herself that she wouldn’t mind?

PM: Are you embarrassed by it?