You’ll be wanting one of these.

Also, the hummingbird helmet. Via Coudal.

Today’s Guardian editorial sings the praises of that “radical literary magazine,” The London Review of Books:

So essential to Britain’s intellectual life... The editorial care taken is a cause for wonder and cheer.

The LRB is also praised for,

The standard it keeps up.

Those who diverge from the Guardian’s definition of standards may feel less enthusiastic. Let’s not forget the LRB’s default anti-Israel bias, perhaps best summarised by the magazine’s editor, Mary-Kay Wilmers, who told the Sunday Times: “I’m unambiguously hostile to Israel because it’s a mendacious state.” There’s also the LRB’s history of excusing Islamic terrorism with wild inversions of reality. As, for instance, when Charles Glass fawned over the  “uncompromising programme” of Hizballah and its “intelligent” use of “car bombs, ambushes, small rockets and suicide bombers.” It’s always heartening to see literary intellectuals being titillated by random savagery and casually disregarding the openly genocidal statements of Hizballah’s Hassan Nasrallah. I suspect readers of the LRB will be studiously unaware that in 2003 Hizballah’s TV channel broadcast a 30-part “history” series based on The Protocols of the Elders of Zion. But then this is the kind of “intellectual life” that sees fit to publish a breezy hagiography of – wait for it - Robert Mugabe.

We’ve seen such things before, not least in the Guardian itself, and in such elevated organs as the New Left Review. As when the Marxist art critic Julian Stallabrass pondered the “spectacle” of terrorism and seemed more than a little aroused by the “vanguard politics” of “Islamic revolutionaries” who “harden themselves against mundane sentiment.” According to Mr Stallabrass, “the 9/11 attacks did no more than return to the US a taste of the force it has wielded across the globe.” A view shared by the Cambridge historian and LRB regular Mary Beard, who described the events of that morning as a “predictable outcome of US actions,” while putting the words terrorist and terrorism in ironic quotation marks. Ms Beard also pondered the feeling that “America had it coming” and likened jihadist terrorism to “extraordinary acts of bravery.” The Guardian’s then comment editor Seumas Milne also framed terrorism in quotation marks and said with eerie confidence, “Americans simply don’t get it.” This, on September 13, while human dust was still, quite literally, settling on Manhattan.

The London Review of Books is of course Arts Council funded.

Busy today, but I thought I’d steer newcomers towards the updated greatest hits. And poking about in the archives isn’t entirely without its rewards. For instance, you’ll find pointers to a mirror made of wood, some presidential spanking, ruminations on performance art, and what may well be the world’s largest collection of navel fluff.

I know. It’s a feast for the senses.

Before Chuck-E-Cheese there was The Rock-afire Explosion.

“I started a new restaurant chain called Showbiz Pizza Place and we got singing robots in there...”

Time for another selection of Classic Sentences from the Guardian. Or rather the Guardian’s Sunday sister paper, the Observer. Until recently, I had thought the Observer’s commentary wasn’t quite as obnoxiously self-loathing as the material that swills all but daily through the piping of the Guardian. Sadly, it seems I was mistaken:

So barks the headline of AlexRenton’s latest exercise in ecological hair-tearing. Yes, I know what you’re thinking. It’s just another overexcited sub-editor and not representative of an otherwise measured and sober article. However, the first line reads,

The worst thing that you or I can do for the planet is to have children.

One less British child would permit some 30 women in sub-Saharan Africa to have a baby and still leave the planet a cleaner place.

Why not start cutting population everywhere? Are condoms not the greenest technology of all?

It was certainly the most successful governmental attempt to preserve the world’s resources so far.

And there’s this little gem.

A cull of Australians or Americans would be at least 60 times as productive as one of Bangladeshis.

So several candidates there – from, lest we forget, a progressive and liberal newspaper.

Deciding not to have a child because of their estimated annual CO2 production is a particularly wretched parental calculus and suggests either pathological self-disgust or pretensions thereof. I suspect Alex Renton measures his moral and intellectual sophistication by the extent to which he loathes his own culture, and by extension himself. That, or he pretends such for the benefit of other, likeminded souls. Happily, he’s found a cause well suited to the cultivation of such feelings. Less happily, he presumes to share his leanings with others, coercively if necessary:

Could children perhaps become part of an adult’s personal carbon allowance? Could you offer rewards: have one child only and you may fly to Florida once a year?

Readers may feel inclined to assist Mr Renton in his totalitarian urges by gnawing off his testicles and tossing them on a fire. And then doing the same to any male children he may recklessly have sired. For Gaia, of course.

Just 8 km in diameter, Saturn’s moon Daphnis casts its shadow. The tiny moon’s gravity creates waves in Saturn’s A ring that extend above the plane to a height of 1.5 km. Image taken by Cassini in visible light on June 26, at a distance of approximately 823,000 km from Daphnis. 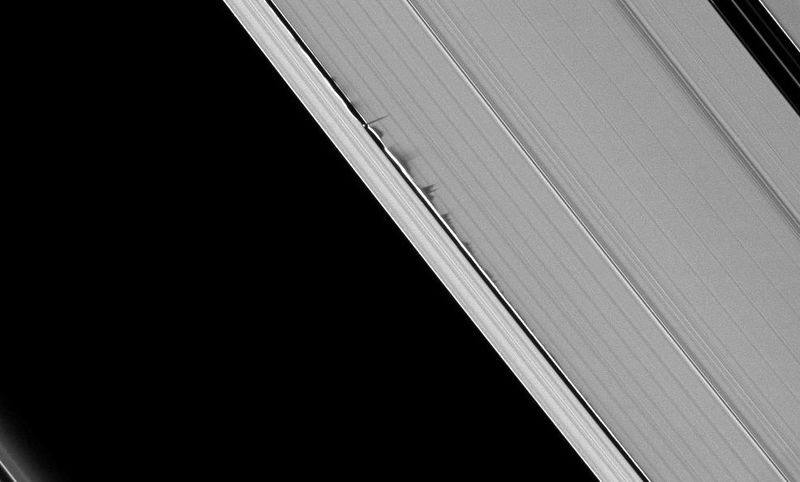 I Sense a Malign Presence

A while ago, on the subject of identity politics and competitive victimhood, I wrote:

Any claim to moral agency is surrendered to those members of a favoured group who happen to be shouting loudest. Thus, injustice is defined, unilaterally, by feelings, or claims of feelings - and by the leverage they provide. Phobias, prejudice and oppression become whatever the Designated Victim Group or its representative says they are. And the basis for apology, compensation and flattery becomes whatever the Designated Victim Group says it is. The practical result of this is egomaniacal license and the politics of role-play.

As if to illustrate this point, the Observer’s Andrew Anthony profiles Jane Elliott, a “diversity training” pioneer and Witchfinder General for the modern age:

Elliott is keen on verbal watchfulness. She believes that racism is in the eye of the beholder and therefore one needs to be ever-sensitive to the possibility of giving offence. “Perception is everything,” she says. “If someone perceives something as racist then I am responsible for not saying that thing.”

Note Elliott’s disregard for context, motive or objective criteria. “Perception is everything,” says she. By which she means the perception, or misperception, of one party only. This is the premise of Elliott’s crusade – to provide moral correction for all pale-skinned people. The particulars of an exchange and who did what to whom are all but immaterial; what matters is which party belongs to the Designated Victim Group, as defined by Jane Elliott and others in the trade. Clearly, moral logic isn’t Elliott’s strong suit; hers is the realm of pantomime and emotional bullying. As Elliott’s own publicity material makes clear, she “does not intellectualise… she uses participants’ own emotions to make them feel discomfort, guilt, shame, embarrassment and humiliation.” And there’s the rub. Once rendered suitably emotional and distressed, her subjects can be re-educated so much more easily. Want to see how? Elliott’s 1996 workshop documentary Blue Eyed can be viewed here. The fun starts around the 2:00 mark with the guy and his name tag. And pay close attention to the exchange around 5:40, before the “exercise” begins.

We’ve seen this unhinged and pernicious nonsense before of course, not least from Peggy McIntosh and her “invisible knapsacks of privilege,” and Shakti Butler, who tells unsuspecting students that, “the term [racist] applies to all white people living in the United States.” Like McIntosh and Butler, Elliott’s formulation of guilt is presumptive, unilateral and based on a conviction that “white ignorance is the problem.” (A problem that “we white folks have now managed to export… all over the world.”) Thus, guilt is framed as a collective phenomenon and effectively a function of a person’s pigmentation. So no racism there, clearly. Bearing in mind how “perception is everything” and what that entails, it seems unlikely that realistic argument will be encouraged or looked on kindly. And those who happen to have pale skin and are unfortunate enough to fall within Elliott’s influence may not wish to be held hostage by every passing opportunist or liar with a grudge.

Sceptical readers may wonder if Elliott reveals more than she intends when telling her captive audiences that “a new reality is going to be created,” that they have “no power, absolutely no power,” and that her title, “bitch,” stands for “Being In Total Control, Honey.” And some readers may question the credibility and motives of an “educator” who tells students that, “white people invented racism.” Transcending such vices is of course impossible, except through Ms Elliott and her tender ministrations. Being as she is the self-appointed gatekeeper of redemption through guilt.

Not Quite Falling Over