Sadly, the graphic nature of certain “body positive” items prevents their display here. This is, I maintain, a classy joint and the swooning couch is still in storage. However, I can draw your attention to the impressive range of uterus plushies, lovingly detailed with smiles, ovaries and facial hair. Behold, for instance, the Frida Kahlo Uterus Plushie, which features an imposing mono-brow and “an unyielding creative presence.” As you can see, it’s a celebration of womanhood: 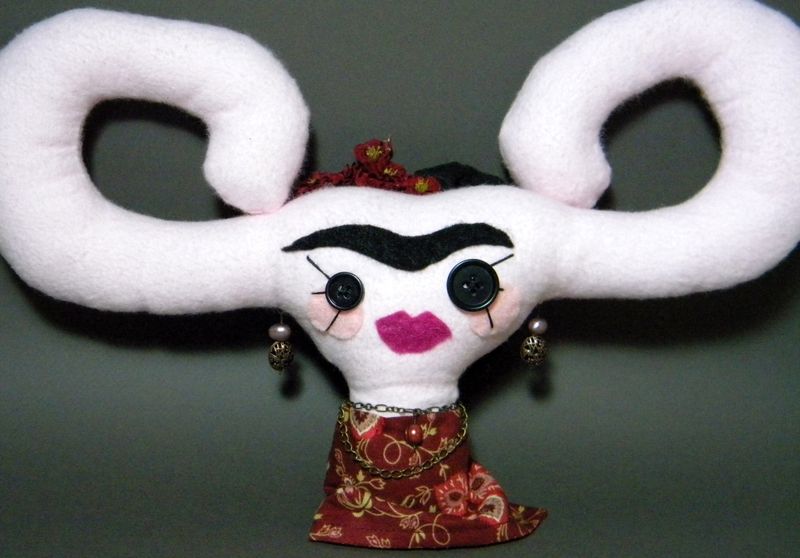 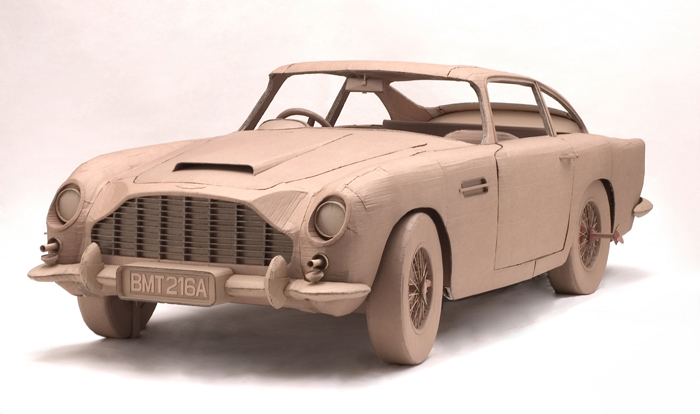 These are a few of the things Chris Gilmour makes with cardboard and glue.

John Meredith steers us to another Classic Sentence from the Guardian. Two, actually.

I’d like to say that this encounter has propelled me to carry the bag with defiance, but instead it has left me slightly bruised. I’ve since bought an incredibly sombre pair of jeans – unusual for me.

All I needed for the day was a notebook, my iPod Touch, a Kindle and some keys. They all slotted snugly into a patent red zip-up bag by the young London menswear designer James Long. 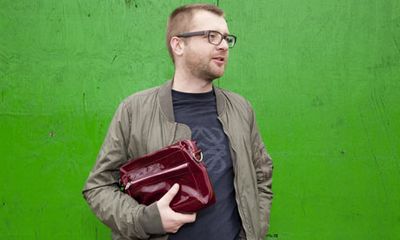 And it’s not just rather fabulous. It’s also a political statement.

I find the word “manbag” such a bore: it is often used mockingly, and it categorises what I think should be category-free.

Then the horror began.

Whose Vanity is Visible Here?

Since 1994, a Pakistani activist who founded the Progressive Women’s Association “has documented 7,800 cases of women who were deliberately burned, scalded or subjected to acid attacks, just in the Islamabad area. In only 2 percent of those cases was anyone convicted.”

When terrorism is personal.

A word of caution. The images are graphic and possibly distressing. Note how often the captions read “familial dispute” or “rejected him for marriage.”


It’s the car horns that do it. Related: My Mashed Potato is Telling Me Something.

Speaking of the Arts Council and its casual arrogance, Karen steers our attention to this little nugget:

A dance artist with epilepsy is to try to induce a seizure on stage. Rita Marcalo has stopped taking her medication ahead of the event at The Bradford Playhouse. Arts Council England, which is funding the performance, said it aimed to raise awareness about the condition. Ms Marcalo, the artistic director of Leeds-based dance company, Instant Dissidence, plans to induce a seizure as part of the 24-hour Involuntary Dances event on 11 December, which will also include dance and poetry readings.

Ah, dance, poetry and epileptic fitting. A fine night out by anyone’s standards. But how will this gesture – sorry, seizure - be achieved? Isn’t it all rather messy and difficult to predict?

During the 24 hours Marcalo will be engaging in a series of epilepsy inducing acts: from ingesting legal brain stimulants (alcohol, cigarettes, coffee, dark chocolate), to stimulating the brain through strobe lights and specially designed computer programmes, to raising her bodily temperature, to fasting, to trying out methods utilised to induce seizures in animal testing, to sleep deprivation.

If she has a seizure, an alarm will sound and the audience will be invited to film on their mobile phones.

And it’s interactive too. How terribly modern.

Yesterday’s post mentioned in passing an Arts Council project that typifies the standards we’ve come to expect from publicly funded art. Jarvis Cocker, the country’s foremost socialist pop musician, was sent to the Arctic for “inspiration” and to raise planetary consciousness, along with another two dozen artistic luminaries:

The ambition of the expedition was to inspire the creative team to respond to climate change... It was an amazing journey; 10 days of artistic inspiration, debate, discussion and exploration.

Men have produced a lot of great art over the centuries, or whatever... but... an iceberg kind of, basically, pisses on it.

Here’s the contribution by Beatboxer Shlomo, who “dedicates his beats to the cause.”

Mr Shlomo’s deep, deep insights into climatology and life can be read here. They include,

I couldn’t help but notice that it’s really quite cold.

Being with all these inspired people seems to have filled my head with a zillion ideas for musical endeavours that could easily save the world.

The expedition organisers explain the artistic riches to be tapped and why the creative excursion is so worth your money:

Through witnessing the environment, taking part in stimulating discussion and observing and participating in scientific field research, we enable our voyagers to gain a real connection to the subject matter. Our ambition is that this experience will inspire all who journey to somehow respond to the Arctic and create work on their return.

Such was the level of inspiration, some of the assembled artists began to work their creative magic immediately.

Tracy Rowledge constructed three series of ‘automated’ physical drawings, mapping the movement of the boat during the expedition.

We must heal the planet with drawings, people. It’s a matter of urgency. For readers of a technical inclination, these ‘automated’ drawings involved suspending a felt-tip pen from the underside of a chair, resulting in random scribble on numerous sheets of paper positioned underneath. This feat was “REALLY exciting” as it “explored movement, time, place and permanence.” The radical innovation also freed the artist to leave the dangling pen and do something more interesting. According to her two brief blog entries, the sum total of her commentary, Ms Rowledge spent much of this liberated time struggling with Greenlandic place names and making sure her fellow passengers knew how “overwhelmed” she was.

The Privileges of Piety

Faith groups are to be given a central role in shaping government policies, a senior minister has vowed. John Denham, the communities secretary revealed that a new panel of religious experts has been set up to advise the Government on making public policy decisions. Mr Denham argued that Christians and Muslims can contribute significant insights on key issues, such as the economy, parenting and tackling climate change.

Oh happy day. Islam and Gaia, together at last.

The minister said that the Government needed to be educated by faith groups on “how to inform the rest of society about these issues.”

Perhaps someone could explain why it is we even have a “communities secretary,” and why this one is so eager to defer to “experts” whose, um, expertise lies not in parenting, economics or climatology, but in affairs of an altogether more elevated nature. Sadly, Mr Denham doesn’t reveal which particular “significant insights” will be brought to bear by the aforementioned “faith groups”. Nor is it terribly obvious how being Muslim or Christian might bestow a parental or economic wisdom unavailable to less pious human beings.

Which leads us to another item featuring one of those “experts” - Dr Rowan Williams, the Archbishop of Canterbury - self-described “hairy lefty,” palace-dweller, figure of ridicule, apologist for terrorism and chief executive of a failing religious enterprise. Dr Williams’ latest musings on mortal affairs are also aired in the Telegraph, where we learn “higher taxes would be good for society”:

Dr Rowan Williams said that taxation should not be seen as a way of stifling business or redistributing wealth but helping to make the world a better place in which to live.

You may want those sunglasses. It’s dazzling stuff.

He called for new levies to be introduced on financial transactions and carbon emissions, and an end to the idea that unlimited economic growth is desirable... “Taxation builds a habitat - already, quite properly, through state welfare provision, but potentially in other less familiar ways.”

Whatever Dr Williams chooses to believe, higher taxation and “new levies” are a very good way of stifling business, and base commerce is ultimately how we pay for all of those good deeds the Most Revered One likes to bang on about. And if the implied individual belt-tightening is so “good for society” – that’s you, dear reader - why isn’t it good for government too? Or should the state become larger and more righteously engorged, “making the world a better place” with publicly funded diversity policy officers, tobacco control officers, undercover waste bin spies and other consciousness-raising efforts? As, for instance, when the Arts Council saw fit to spend £150,000 of your taxes on sending Jarvis Cocker to the Arctic for “inspiration,” along with Marcus Brigstocke, Kathy Barber, Julian Stair and Beatboxer Shlomo:

The ambition of the expedition was to inspire the creative team to respond to climate change... It was an amazing journey; 10 days of artistic inspiration, debate, discussion and exploration.

I’m sure it was a hoot. And when it comes to “artistic responses to climate change” you just need to include a third-rate leftwing comedian, a “billboard hijacker” and a maker of ceramics.

Continue reading "The Privileges of Piety" »

It Works on Many Levels

A reader has complained that this site doesn’t feature enough sculpture. Conceptual art, yes, and music, quite a bit, but the sculpted arts have been shamefully neglected - apart from the odd appearance by some slightly indecent balloons. Keen as I am to please, and such is the richness of the sculptural world, I feel obliged to share with you the latest work by Chen Wenling. It’s over six metres tall, is made of fibreglass and paint, and, naturally, it’s a deep and devastating critique of global capitalism. The piece is called What You See Might Not Be Real, though some prefer a less cryptic title: The Big Golden Farting Bull. 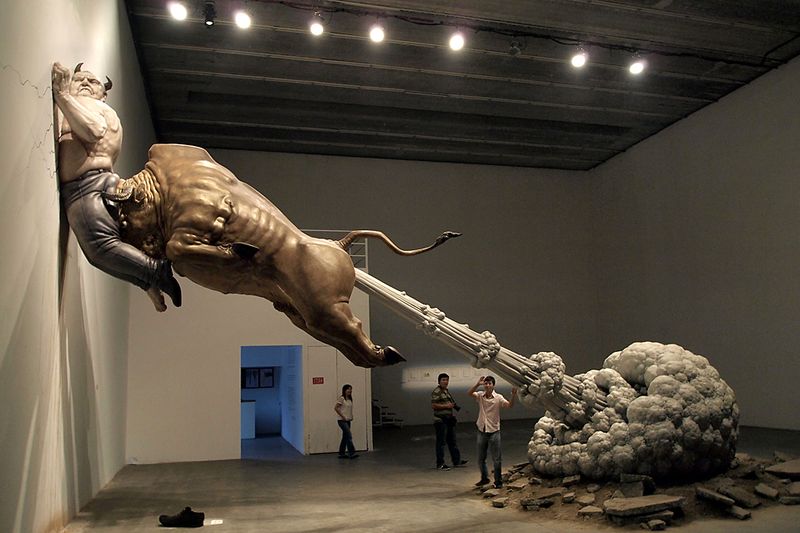 The arts, they ennoble.

[Margaret Thatcher] was the closest thing Britain has ever had to Stalin and Pol Pot.

It is not at all dumb to suggest that Thatcher was the closest thing we have had to Stalin and Pol Pot. That does not imply she was genocidal - merely that of British Prime Ministers it is difficult to think of another who pursued class war and year zero policies as enthusiastically as she did.

Written by Graham, in a heated and bizarre discussion over at Harry’s Place. In the same thread, also by Graham: