For newcomers, three more items from the archives.

“The wind was so strong that the mission would have failed immediately, the bench would be blown off the iceberg in no time. Around 8 in the evening we gave up... I started to feel that my project was gaining a different, and maybe stronger, meaning... And maybe the bench was an excuse and didn’t need to be left out on the ice at all.”

It seems to me that a huge part of Bond’s appeal, as a character and a franchise, is precisely the rejection of many PC assumptions and their petty, emasculating tenor. Unlike many Guardian writers, Bond isn’t prone to disabling fits of quasi-Marxist handwringing. And nor is his boss, ‘M’, played by a pleasingly firm Judy Dench - hardly a “flimsy thing who needs hard male mastery.”

On Bidisha’s Planet Diversity all science fiction will be made to conform.

The claim that the world of science fiction is inordinately populated by “homophobic white male straight writers” and “woman-hating racists” – none of whom are named - sits uneasily with the author’s admission that science fiction fandom is noted for its breadth and inclusivity and a propensity for discussing “sex, race, whatever.” Nor is it entirely consonant with her own extended list of suitably inclusive authors. Indeed, so extensive is this list, and so numerous are the writers and characters unfairly omitted from it, one might suppose the author of this article is intent on disproving her own premise.

Or poke about in the greatest hits.

The Tail Gunner and Catzilla: King of the Monsters. // Dog washing machine also works on cats. // A horse and a man, rotated in 4 dimensions. // How to make a three-pendulum rotary harmonograph. // Radio dials of yore. // An LED Mohawk helmet. // Mexico’s home for elderly prostitutes. // Young me / now me. (h/t, MeFi) // A gallery of misplaced manhole covers. // Cancer versus nanobots. // Remember cassettes? // Navigate house and techno. // The art of UFO. // Father Ted in Lego, in Gaelic. // Robot fish. // Plankton. // A brief history of the paperclip. // The perils of AutoSmiley. // And some table magic from China.

More Than You Can Chew 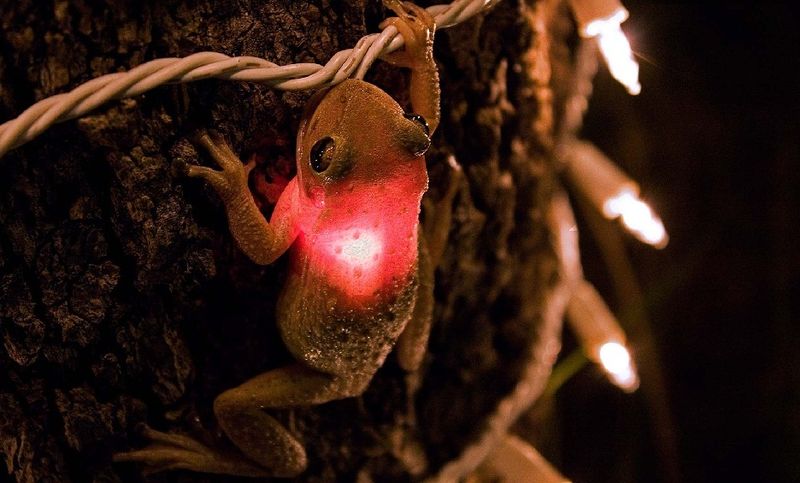 Should any frog enthusiasts be alarmed, fear not. As Mr Snyder explains,

This is a Cuban tree frog on a tree in my backyard in southern Florida. How and why he ate this light is a mystery. It should be noted that at the time I was taking this photo, I thought this frog was dead having cooked himself from the inside. I’m happy to say I was wrong. After a few shots he adjusted his position. So after I was finished shooting him, I pulled the light out of his mouth and he was fine. Actually, I might be crazy but I don’t think he was very happy when I took his light away.

A Telekinetic Battle of Minds

When a famous tantric guru boasted on television that he could kill another man using only his mystical powers, most viewers either gasped in awe or merely nodded unquestioningly. Sanal Edamaruku’s response was different. “Go on then - kill me,” he said.

Mr Edamaruku had been invited to the same talk show as head of the Indian Rationalists’ Association - the country’s self-appointed sceptic-in-chief. At first the holy man, Pandit Surender Sharma, was reluctant, but eventually he agreed to perform a series of rituals designed to kill Mr Edamaruku live on television. Millions tuned in as the channel cancelled scheduled programming to continue broadcasting the showdown.

Thankfully, there’s a clip of the most tense moment of this paranormal confrontation, complete with chilling music.

First, the master chanted mantras, then he sprinkled water on his intended victim. He brandished a knife, ruffled the sceptic’s hair and pressed his temples. But after several hours of similar antics, Mr Edamaruku was still very much alive.

All of which is flimsy excuse to post a link to this.

Tim Worstall on the uses of the Arts Council.

Now I am a philistine, yes, but even I can see the value of an organisation which provides indoor work with no heavy lifting for the dimmer members of the upper middle classes. I just don’t see that people should be threatened with being shot for refusing to fund it.

University professors are not among the most humble members of our society. Populist right-wing politicians can hardly find easier punching bags than some of the blowhards on college campuses. But how did we get from Socrates’ famous dictum, “All I know is that I know nothing” to Skip Gates’s “Don’t you know who I am?”

Theodore Dalrymple on the NHS.

And Peter Risdon on multiculturalism.

Via Karen, Zombie and Dicentra, a piece of radical self-parody:

An ex-vegan who was hit with chilli pepper-laced pies at an anarchist event in San Francisco said Tuesday that her assailants were cowards who should direct their herbivorous rage at the powerful - not at a fellow radical for writing a book denouncing animal-free diets. Lierre Keith, a 45-year-old Arcata resident, was attacked at 2:15 p.m. Saturday at the 15th annual Bay Area Anarchist Book Fair while discussing her 2009 book, The Vegetarian Myth. A 20-year vegan, Keith now argues that the diet is unhealthy and that agriculture is destroying the world. As Keith stood at a lectern at the Hall of Flowers in Golden Gate Park, three people in masks and black hooded sweatshirts ran from backstage, shouted, “Go vegan!” and threw pies in her face. While they fled, some in the audience cheered or handed out leaflets.

Naturally, the irritant pie-hurling incident is available on YouTube.

“The whole thing was designed for social humiliation,” said Keith, speaking Tuesday from her sister’s home in Kansas. “We’re supposed to be against sadism and cruelty and domination, and these people were willing to do this to me.”

The naïveté, a kinder word than delusion, is almost – almost - charming.

Keith said her values are similar in most ways to those of her attackers. She believes in militant action, even property destruction, if it can lead to change.

So how’s that militant action working for you, Ms Keith? We can assume it’s led to change, yes?

Among those rejoicing in the pie attack was the North American Animal Liberation Press Office, which often prints communiqués from activists taking credit for attacks on animal researchers. The group said Keith was wrong about veganism, referred to her as an “animal holocaust denier,” and scolded her for calling the “agents of state oppression” - the police.

Bollywood, where anything is possible. // The skies of Dubai. // Dung shoes. // Jonathan Miller’s A Rough History of Disbelief. Parts 2, 3. // Retro-futuristic garbage collection. (h/t, Coudal) // 1970 World’s Fair, Osaka. // Paris, gigapixelled. // The GigaPan Epic Pro. // “Gameplay continues until orgasm is achieved.” (nsfw) // “After hundreds of drinks of the radium tonic, he began having pains in his jaw.” // When the light is just so. // Steampunk lamps. // The periodic table of sci-fi film and television. // Vintage Trek photostream. // Edison’s silent Frankenstein, 1910. // Kim Jong-Il has a Plan B. // Zebra cleans hippo’s teeth. 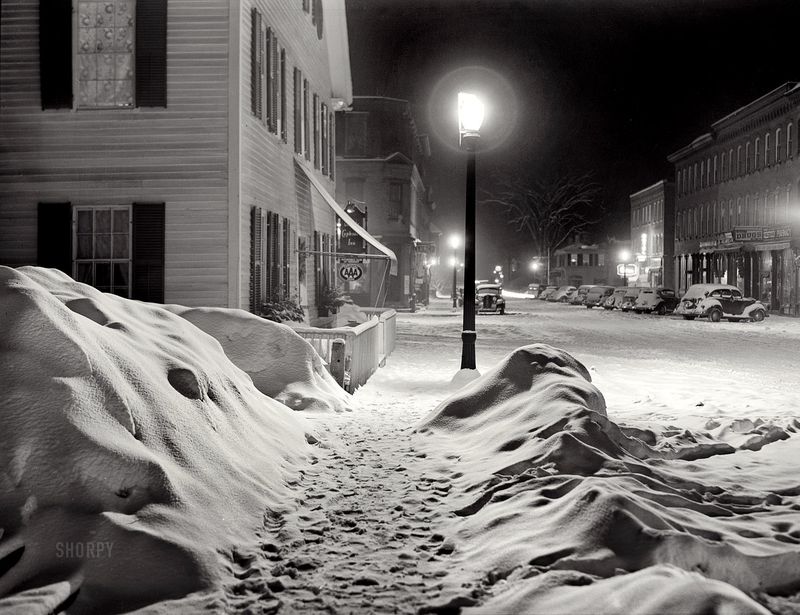 Dr Westerhaus sends us this.

A man who assaulted a female police officer with his penis has been fined. Marium Varinauskas, 28, tried to strike the officer on the head with his penis when she was called out to his flat,

but she got out of the way.

“The accused got to his feet and was standing over the police officer exposing his penis and thrusting it in her face, forcing her to take evasive action to avoid getting struck.”

Annella Cowan was told that the Lithuanian had now quit binge drinking because of the incident.

The Feel of Rubber

A few days ago, my piece on the political vanities of Professor Jere Surber was linked from a message board where Karl Marx quotations are displayed triumphantly and the following question still hangs in the air:

And what’s with this historical revisionism that keeps creeping up that puts Hitler on the left?

Readers may find it odd that there are people who resent Hitler’s Nationalsozialistische Deutsche Arbeiterpartei – National Socialist German Workers’ Party – being regarded as in any way leftwing. Albeit not quite as leftwing as Stalin’s communism, with its more... international flavour. If Hitler wasn’t a socialist, or a type of socialist, it’s odd that he should give his party an overtly socialist name and outline his economic programme in overtly socialist terms: “We are socialists, we are enemies of today’s capitalistic economic system... and we are all determined to destroy this system under all conditions.” [Adolf Hitler, speech, May 1, 1927.] It’s odd too that Hitler should subsequently inform the “bourgeois” newspaper editor Richard Breiting that the Nazi economic programme “demands the nationalisation of all public companies, in other words socialisation, or what is known here as socialism.” Perhaps there are those who imagine the word “left” is, and always must be, universal shorthand for “good hearts, decent people and unassailable virtue.” If contributors to the aforementioned message board are visiting today, they may find what follows a tad bothersome. Here’s Stephen Hicks noting some interesting thematic links:

Baader-Meinhof was a far left terrorist group, and one of the most violent, killing dozens and maiming more during the 1970s. Its “official” name was Rote Armee Fraktion (“Red Army Faction”). The logo shows a nice big socialist red star with a Heckler Koch submachine gun. The group’s two most prominent members were Andreas Baader and Ulrike Meinhof. Here is one of Meinhof’s explanations: “Auschwitz meant that six million Jews were killed, and thrown on the waste-heap of Europe, for what they were: money Jews. Finance capital and the banks, the hard core of the system of imperialism and capitalism, had turned the hatred of men against money and exploitation, and against the Jews… Anti-Semitism is really a hatred of capitalism.” [Source.]

Which is of course right out of Karl Marx: “What is the profane basis of Judaism? Practical need, self-interest. What is the worldly cult of the Jew? Huckstering. What is his worldly god? Money. Very well: then in emancipating itself from huckstering and money, and thus from real and practical Judaism, our age would emancipate itself. [...] As soon as society succeeds in abolishing the empirical essence of Judaism - huckstering and its conditions - the Jew becomes impossible… The social emancipation of the Jew is the emancipation of society from Judaism.” [Source: On the Jewish Question (1843), in The Marx-Engels Reader, pp. 48, 52.]

Which is what Hitler agreed with: “Today I will once more be a prophet. If the international Jewish financiers, inside and outside Europe, succeed in plunging the nations once more into a world war, then the result will not be the Bolshevisation of the earth, and thus the victory of Jewry, but the annihilation of the Jewish race in Europe!” [Source: Hitler, speaking in the Reichstag on January 30, 1939.] As did Goebbels, in speaking of “the money pigs of capitalist democracy”: “Money has made slaves of us.” “Money is the curse of mankind. It smothers the seed of everything great and good. Every penny is sticky with sweat and blood.” [Sources: Goebbels, 1929, quoted in Orlow 1969, p. 87 and Goebbels 1929, quoted in Mosse ed., 1966, p. 107.]

Bonus question: Who said this?

“The worker in a capitalist state - and that is his deepest misfortune - is no longer a living human being, a creator, a maker. He has become a machine. A number, a cog in the machine without sense or understanding. He is alienated from what he produces.”

Answer: Joseph Goebbels, in his 1932 Those Damned Nazis pamphlet.

I talk with Stephen Hicks here. Should any visiting Marxists resent parting with money for Dr Hicks’ book Explaining Postmodernism, it can read here, for free.