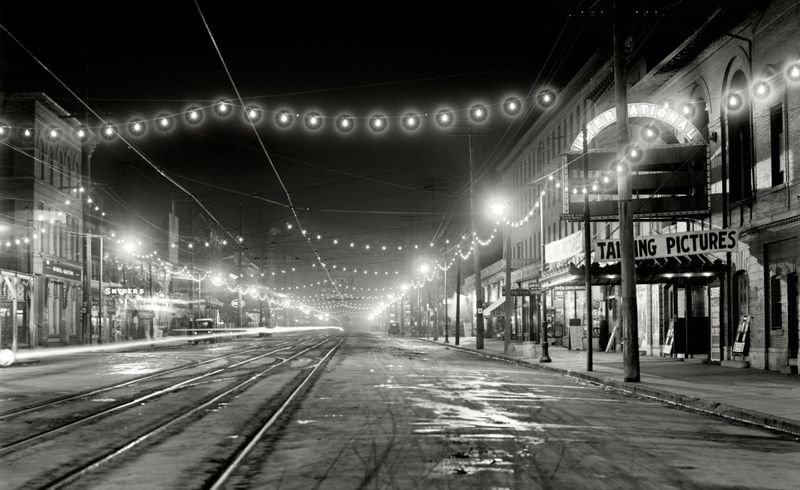 For newcomers, two more items from the archives.

Not long ago on Radio 4, a legless and rather prickly “activist” insisted that it was “oppressive” to view the loss of a person’s legs as in any way regrettable. Regarding this loss as something negative was apparently “ableist,” “ignorant” and offensive. This claim was repeated several times, emphatically. At one point the activist declared that given a chance to walk again he would refuse, such was his “pride” in having lost a third of his body. Anger had been displaced from the obvious grievance – the traumatic loss of one’s legs – to the supposed “injustice” of regarding limb loss as a dismaying or terrifying state of affairs. As a coping mechanism, it wasn’t entirely honest. Or, it seems, successful.

Contraband may be hidden in the greatest hits. So grope them thoroughly.

The election of Len McCluskey as leader of Britain’s most important trade union should be a shot in the arm for anyone who wants to see… the development of a genuine political alternative.

Yes, Labour’s new paymaster – and “the mainstream left candidate” - is a man elected on a 16% turnout by just 7% of the Unite union’s total membership. Mr McCluskey’s greatest claim to fame is his role in the British Airways cabin crew strikes, which began a year ago, have cost the airline around 150 million pounds and have yet to be resolved. McCluskey was formerly a supporter of the totalitarian Trotskyist organisation Militant and is still enthused by class war sloganeering. When not quoting Ernesto “Che” Guevara and predicting a “final victory” over capitalism and private ownership, Mr McCluskey likes to reinvent British history: “We are all supposed to believe now that the 1970s was a horrible time. It wasn’t at all.”

His memorable lines include,

There is no such thing as an irresponsible strike.

My political principles are clear. Capitalism has failed.

Mr McCluskey, who supported an organisation that planned to “abolish” capitalism, has weathered this failure remarkably well and now takes home a basic salary of £100,000. In June 2008, after tanker drivers rejected a pay increase of 6.8%, McCluskey – then Unite’s assistant general secretary - railed against Shell management, pointing out that they “have themselves enjoyed 15%-plus pay increases in the last year.” However, Mr McCluskey’s union predecessors - Derek Simpson and Tony Woodley– were spared similar opprobrium, despite salaries of £196,497 and £135,330 and despite them enjoying pay rises over three years of 56% and 62% respectively. Interviewed by the Liverpool Echo, Mr McCluskey “fondly” recalled that he had “led lots of strikes” and described his agenda as that of the “progressive left.”

Back to the future, people. A Seventies revival looms. 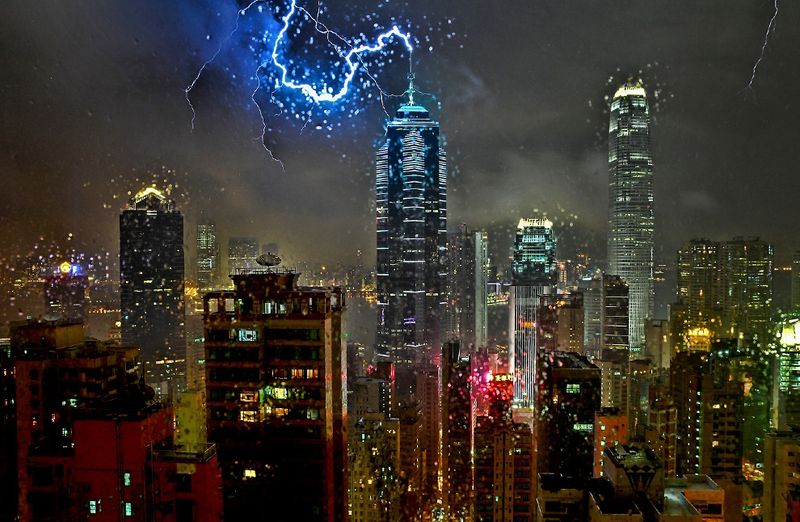 Photographed by Michael Siward, September 2009. One of these.

Misogynist violence is unacceptable, but...

So wrote the Guardian’s Priyamvada Gopal in August this year, shortly before telling us that the Taliban’s misogynist violence and kidnapping of children are actually not that bad compared to the evils of the West and its “bankrupt version of modernity.” A modernity that has “little to offer Afghans other than bikini waxes and Oprah-imitators.”

She is, of course, at it again.

Hurling a fire extinguisher into a crowd is clearly wrong, but…

This time, our esteemed postcolonial studies lecturer is conjuring equivalence between, on the one hand, arson, vandalism and attempted manslaughter, and, on the other, cuts to public spending. Cuts that will reduce overall spending to the levels of 2001/2 (ah, the dark ages) and in many cases merely slow the rate of increase in public subsidy.

It is the coalition’s policies that are going to generate bloody mayhem… Focusing on damage to buildings usefully distracts attention from the much more far-reaching and systematic violence now being visited upon our education system and society more widely.

Violence. A word Ms Gopal uses no fewer than nine times. Fiscal responsibility, albeit belated, is violence, see? Reducing the national debt is violence. Extending credit for tuition fees is violence. Attempting to contain the growth of the state –  enlarged by 17% under New Labour – that’s violence too. Audacious, isn’t it? Ms Gopal, who “teaches in the Faculty of English at the University of Cambridge,” has casually redefined violence to include practically anything to which she takes political exception. A move that slyly elevates thuggery to retaliation. Now one might well have legitimate objections to particular outcomes of the proposed austerity measures, but to frame those measures as violence – and by implication as analogous to rioting and deserving of payment in kind – is not a manoeuvre that resounds with good faith. But then Ms Gopal has form in matters of distortion, hyperbole and wilful fantasy. Regarding the protestors, Ms Gopal enlightens us,

Most adhered to the prescribed rituals of peaceful and legitimate protest. But, as we should expect in times of great injustice, some departed from the script. They lit bonfires, smashed windows, occupied the roof of an unlovely building and ill-advisedly hurled the odd inanimate object.

It is indeed “ill-advised” to throw a fire extinguisher from a rooftop into a crowd, targeting police officers standing below. It’s remarkable that no-one was killed. But hey, for the cause. And readers may note that the claim of a supposedly non-violent “script” is not entirely consonant with the sight of rioters and arsonists wearing official NUS clothing and being cheered on by the crowd. It’s also somewhat at odds with NUS president Aaron Porter calling for a “demo-lition” on a route past Conservative HQ, or promising “we will use every weapon in our armoury” and telling students they needed to be “inside the rooms where the deals will be made.” Radical that she is, Ms Gopal is attuned to such sentiments and what they imply. “Non-violence,” she tells us, “has been perverted… into a subterfuge for rulers… Genteel rallies do not put sufficient pressure on the political class.” How she squares such enthusiasm with her professed disapproval of deadly projectiles is, alas, a mystery. Still, physical intimidation and property destruction are very exciting and Ms Gopal is hardly alone in finding mob violence both excusable and titillating: 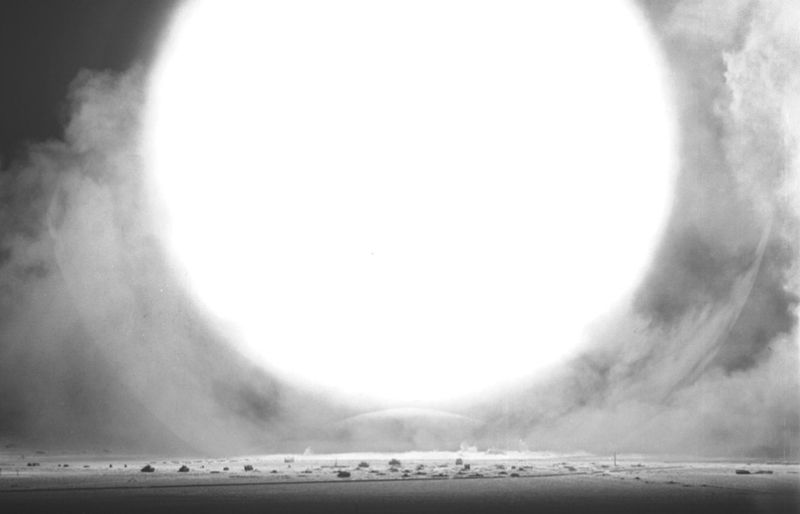 “Tanks, jeeps and other test vehicles litter the desert floor milliseconds before the force of the explosion destroys them. Just below the bottom of the fireball, a crescent-shaped shock wave has bounced off the desert floor and is merging into the expanding nuclear fire.” From the New York Times slideshow, Capturing the Atom Bomb on Film. Image taken from Peter Kuran’s book, How to Photograph an Atomic Bomb.

I want to divorce the man I love and he wants to divorce me. We do not wish to separate – simply to end our seven-year marriage… We are both fed up with being part of the hetero-husband-and-wife brigade that is accorded so much status and privilege.

So says Lara Pawson in a piece titled The Tyranny of Marriage, thereby raising self-preoccupation – a Guardianista signature - to transcendental levels. It’s the “hegemony of coupledom,” see? Something must be done. Perhaps we should make room in our catalogue of classic sentences.

So why did we marry? Our wedding was in 2003, two years before the legislation for civil partnerships was introduced. Had civil partnerships been available we might have been the first in the queue of heterosexual couples now fighting for the right to become partners.

Heterosexual couples such as Tom Freeman and Katherine Doyle, who object to the terms “husband” and “wife” as being “patriarchal” and insufficiently egalitarian, and who claim their human rights have now been “violated.” For exhibitionist ideologues, the words “husband” and “wife” must – simply must – denote inequality. You can see the terrible bind they’re in. Will the oppression never end?

We wanted a public celebration to acknowledge our love, and my husband- to-be felt strongly that a ceremony with singing and reading was important, as well as the almighty knees-up. Marriage, albeit a God-free one, seemed to be the only available path.

Ms Pawson’s marriage - or, as she puts it, “state-sanctioned agreement” - took place at a London register office,

and was followed the next day by a large party in a large garden with a grand marquee and later still, 184 hangovers.

Not exactly a shoestring do, then. Perhaps the garden marquee, extensive guest list and “almighty knees-up” were meant to express the injustice, tragedy and trauma of the event.

I did not change my name, nor he his. We simply swapped rings, gave appalling speeches and that was that. Or so I thought… Before we even tied the proverbial knot, I became swiftly aware of discrimination against wives.

Remember, this is a piece objecting to the “hetero-husband-and-wife brigade” being “accorded so much status and privilege.”

“I need to do it.” Kim Rugg remakes newspapers. Via.

The “diversity” doctrine… urges students to huddle inside their pre-chosen identities. The Yale [application] question is the first of a long series of subtle steps that teach students to lead with their particularities and to cultivate a kind of group vanity… Would the Yale admissions office look favourably on the student who answered, “I have found ‘diversity’ to be a cudgel by which self-appointed elites attempt to enforce their preferences over others. Diversity to me has been the experience of having my individuality denied, suppressed, and demeaned. It is a word that summarizes a smarmy form of oppression that congratulates itself on its high-mindedness even as it enforces narrow-minded conformity.” No, any student really seeking admission to Yale wouldn’t say such a thing. But chances are very good that a great many students harbour insights very much like that. They know their ethnic or racial categorization, their socio-economic status, and other such characteristics matter far more to admissions offices than their actual thoughts about who they are.

Jacqueline Johnson knows what it's like to be shunned because of her weight. In the early 2000s fat activism was edging into existence, and Johnson, a weight studies scholar, was deemed too skinny to take part. “I tried to join a fat activist group, and I was rejected because I was not of size,” she remembers… Today it’s a different story. Johnson, who teaches a course on weight and society at George Washington University, is currently a professor with 25 students of all heights and widths. Her Fat Studies class is one of a handful popping up on campuses across the country, teaching students to think about body size critically, politically, and regularly. But despite such courses’ popularity among students, critics worry that such classes emphasize bleeding-heart politics over intellectual rigour.

And Jeff Goldstein on the same.

The only epidemic at issue here is the epidemic of grievance-mongering passing itself off as legitimate “scholarship.” A course on the psychology of creating and empowering ever more oppressed victim groups and the new politically correct vocabulary (and corresponding “hate speech”) that will grow around them… would be far more valuable for students.

Feel free to add your own.