But it’s Clean if it’s Taken by Force

Anna steers us to this. 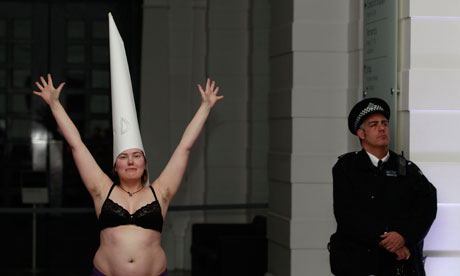 The Guardian’s caption reads, “A demonstrator holds her arms up during a protest at the Tate Britain.” Though readers may wish to devise captions of their own. For those who missed yesterday’s, um, spectacle, art students “invaded” Tate Britain and organised a series of life drawing classes to protest against proposed cuts to arts budgets:

Supporters of the protest handed out leaflets outside the building warning that higher fees could lead to empty art schools.

A brilliant, well executed and peaceful protest from students who are angry at the blatant betrayal and abandonment of the arts.

As angry as they were five months ago when protesting against BP’s sponsorship of the arts, estimated at around half a million pounds:

BP’s money is tainted and it is hard to see how the company’s reputation won’t have a long-term impact on those who accept it.

That was dirty money, see? Given voluntarily, unlike taxpayer subsidy, but still, dirty, dirty, dirty. Among those protesting at this insult to moral hygiene was John Jordan, an “artist and activist” and co-editor of We Are Everywhere: The Irresistible Rise of Global Anticapitalism, an anarchist guidebook to “direct action” and a “collision of subjectivities… charged with inspiration.”

Art acts as a great detergent, and being involved with a gallery enables the company to host glitzy events at which it can foster vital relationships with ministers, journalists and foreign dignitaries…

The fiends. Just as being involved with a gallery enables anti-capitalist poseurs a chance to sound important and foster vital relationships with taxpayers’ money.

Corporate sponsorship creates an insidious climate of self-censorship that keeps art trapped in the disease of representation: a tool for preserving the status quo rather than showing us how to live differently.

Clearly, recidivist anti-capitalists showing us how to live deserve better than this. They deserve more public subsidy. It’s vital work. Art institutions must not take donations from companies of which some artists may disapprove. That would be wicked, insidious and a cause of artistic disease. Instead, those institutions should encourage the state to take money from the taxpayer, forcibly, and give it to artists and projects of which the taxpayer may disapprove. That would be virtuous and clean, apparently.

I've put a Job Centre sign up outside my house. That'll deter them. I'll be quite safe.

"Though readers may wish to devise captions of their own."

(1) Important Artist Demands To Be Taken Seriously And Given Free Cash.

"Supporters of the protest handed out leaflets outside the building warning that higher fees could lead to empty art schools."

Considering Tracy Emin's bed, Damien Hirst's mutilated bovines, and the Turbine Hall of the Tate Modern filled with ceramic sunflower seeds are we meant to think that empty art schools would be a bad thing?

The fat woman in the dunce hat isn't making a great argument for subsidy.

"Though readers may wish to devise captions of their own."

Wilbur never noticed when Janice got a new outfit.

Starving artists are my favourite kind. They weed themselves out.

How do I taint my taxes? I want to make sure they don't go to the woman in the hat.

I have a great idea for a bit of performance art! I'll go to one of these art protests dressed as a highwayman (representing the downtrodden working classes) and I'll emulate the rapacious government in its oppressive activities by forcibly removing artists in the crowd from their money, jewelry and, in the cases of any obnoxiously anti-proletarianly "attractive" women, their clothes!

Do you think I could get a grant?

So Hillary Clinton has stopped shaving her pits and joined the Klan in some sort of TSA protest? I thought the let her bypass security...

One assumes the enormous hypodermic syringe on her head is for the imminent taxpayer funded liposuction to convert the rubenesque to sveldt?

Art doesn't need filthy capitalist money. It needs money stolen by the state from poor people. Only with that does Art find its soul.

And taxpayers work for filthy capitalists and corporations so any monies stolen by the state and used to subsidize the arts is tainted even still. The only answer is to cut themselves off from all funding whether it comes directly from corporations, or indirectly from taxing corporate workers.

If, as an art teacher, I gave an assignment to create a sartorial protest against cuts to government funding, and a student submitted her shirtless self wearing a hat made from a piece of paper rolled into a cone, I would have given her an F. Not enough effort or imagination.

Guardian headline: 'Will BP lead Tate into artistic hell? Art risks selling its soul if it looks to corporate sponsorship as the only way out of the funding hole.'

These people really need to get a grip.

“These people really need to get a grip.”

The ingrained sense of entitlement and political lockstep is quite extraordinary. It’s practically impervious. Jonathan Jones – the voice of reason by Guardian standards – noted just how odd some of the assumptions are:

“It’s always seemed strange to me that BP’s name was so prominently associated with an artistically conservative prize, as if big business were imposing its own aesthetic on the arts – British oil for British oil painting. What I didn’t know, had literally never noticed, was that BP also sponsors the anything-but-conservative Tate… In all the years I’ve been seeing exhibitions at Tate’s galleries, I have never once encountered anything that could conceivably have been construed as an advertisement for this or any other corporation, or for capital itself. Very much the opposite… Go to any Tate museum and the only ideology you will encounter is anti-capitalist.”

Quite. The protestors’ objection is ideological and delusional; it’s a kind of territorial indignation. It’s certainly not practical or rooted in reality. It isn’t about a loss of artistic freedom, since no such freedom has been lost and nor is it likely to be. If anything, it’s about public refutation and a loss of ideological conformity: “Those filthy, evil capitalists are bankrolling us with absolute indifference! They’re making us look childish and stupid! Aaiiieee!”

They not only need a grip - they need a backbone. You couldn't pick a less hostile environment for this "demonstration" than the Tate, which was preparing to give their Turner Prize to a sound artist, such is their catholicity regarding visual art. It might have been difficult to distinguish the protesters from normal museum programming. Had they disrobed and held a life drawing class in London Waterloo station or the House of Commons Chamber or some such, that might have made a statement. Of course, there might have been consequences. This is why Jordan blaming anyone but his peer group for an "insidious climate of self-censorship" and "preserving the status quo rather than showing us how to live differently" is so rich - its idea of transgression, which would be politically ineffective in any case, is artistically milquetoast to boot.

"The students, some wearing dunce caps, refused to leave and organised a series of life drawing classes near the entrance to the central London gallery."

Life drawing, eh? And that brings *how* much money into the country...?

"Life drawing, eh? And that brings *how* much money into the country...?"

This belief in absolute entitlement to the labor of others is, I think, unparalleled since the overthrow of feudal aristocracy.

It is a consequence of the large-scale redistributive state.

I see the Klan is now active in Britain. Or is it the Coneheads?

"...that higher fees could lead to empty art schools."

"And taxpayers work for filthy capitalists and corporations so any monies stolen by the state and used to subsidize the arts is tainted even still. The only answer is to cut themselves off from all funding whether it comes directly from corporations, or indirectly from taxing corporate workers."

Why, the solution is simple!

1. The government should calculate the percentage of public revenues raised through taxes on filthy capitalists and corporations.

2. Whatever public funds are then allocated to the arts would be reduced by that percentage prior to disbursement.

I'm sure they'll be pleased about these State subsidies for the Arts!

The government first took from the artists all forms of visual attraction. Then they took away all their funding.