Over at Counting Cats, NickM refutes the Labour Theory of Value using, among other things, socks, Persian rugs and the adventures of James Bond.

I shall refute it via the medium of interpretive dance.

Earth Hour encourages the sanctimonious gesture of turning off trivial appliances for a trivial amount of time, in deference to some ill-defined abstraction called “the Earth,” all the while hypocritically retaining the real benefits of continuous, reliable electricity. People who see virtue in doing without electricity should shut off their fridge, stove, microwave, computer, water heater, lights, TV and all other appliances for a month, not an hour. And pop down to the cardiac unit at the hospital and shut the power off there too. I don’t want to go back to nature. Travel to a zone hit by earthquakes, floods and hurricanes to see what it’s like to go back to nature.

And Jakob Laksin notes the decline of the New York Times.

On the cultural side, the Times’s weakness for diversity cant has made it an easy target for literary con artists. In 2004, the paper was taken in by “J. T. LeRoy,” the supposedly transgendered cult novelist whose background as a “young truck-stop prostitute who had escaped rural West Virginia for the dismal life of a homeless San Francisco drug addict,” as described by the Times’ Warren St. John, had impressed credulous reporters and reviewers at the paper. It later emerged that none of these biographical details was true - not least that “he” was actually a (non-transgendered) “she,” Laura Albert. That revelation must have been especially embarrassing for St. John, who didn’t discover it even after dining with “LeRoy” in broad daylight. 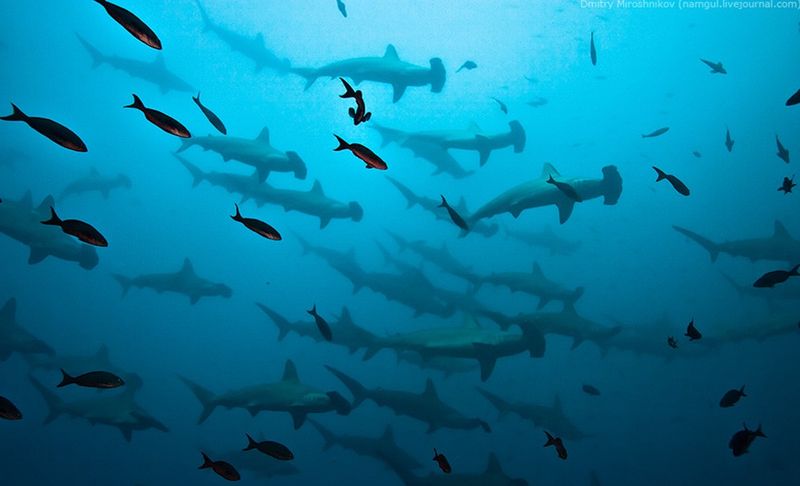 Readers may recall Priyamvada Gopal and her efforts to redefine violence so as to include anything to which she and her peers take political exception, thereby elevating actual thuggery to the status of retaliation. For Ms Gopal, setting fire to occupied buildings isn’t “real” violence and is no more objectionable than “hypocritical language.” This bold and convenient philosophy appears to have been embraced by other Guardian contributors - among them, chronic confabulator Laurie Penny, whose recent pronouncements on Twitter included the following (now deleted):

I have no problem with principled, thought-through political ‘violence.’

Note Ms Penny’s daring use of the inverted comma.

Smashing windows is property damage. That’s not the same thing as violence.

The term criminal damage is harder to diminish and smashing windows with bricks in a non-violent manner is not an easy thing to do on the streets of central London. Needless to say, it takes a fair amount of effort to heave larger, heavier objects through someone else’s windows. Just as it takes a certain disposition not to care particularly about where, or on whom, those objects may land along with shards of flying glass. And perhaps we should assume that Laurie has no objection to her belongings being destroyed by those who disagree with her, provided they feel sufficiently righteous and entitled.

Elsewhere, Leah Borromeo pursues a similar theme in a piece titled Protesters Can’t Disown the ‘Violent Minority’. She tells us, apparently in all seriousness,

There are no “good” protesters and no “bad” protesters. The state sees anyone who publicly declares their dissent to its laws and policies as one thing – a threat. When a state is threatened, it sends its henchmen out to quell it.

Yes, I know. Henchmen. All things considered, there’s a distinct whiff of projection. Another contender, I think, for our series of classic sentences.

The henchmen are the police. And you – student or teacher, patient or nurse – are that threat.

No doubt the state’s “henchmen” will be raiding the offices of the Guardian as I type and Polly Toynbee will soon be hauled away, hooded and in chains.

Sadly, Ms Borromeo doesn’t pause to explain exactly how she and her peers are being violently oppressed. Perhaps she’s referring to the government’s modest reduction in the growth of public spending. We do, though, get plenty of self-flattering assertion:

To try to make distinctions between a “peaceful” and a “violent” protester is inherently flawed. Dissent is a violent reaction. Saying “no” is resistance… So – many apologies to those who wish to distance themselves from the “violent minority.” But we’re in this together. You may not like having to share a boat, but it’s a lot better than drowning.

Those who attended Saturday’s protest untroubled by violent urges, possibly with children in tow, may take exception to this casual flattening of distinctions. But people who managed to walk through central London without smashing windows, trashing cash machines or hurling projectiles at the police are, according to Ms Borromeo, no better than those who did.

Play with the solar system. // A digitised collection of handheld electronic games. // Get a six-pack in seconds. // Tornado meets hardware store. // A brief guide to space junk. // Man builds own scanning electron microscope. // Edible biro. // Modern-day Kyrgyzstan. // Unmelting. // Music and emotion. // Chicks plus webcam. // Tweaking James’ face. // The tax wedge. // For those who miss the shutdown of tube televisions. // The dark(er) side of socialism: “How do we bring down the stock markets?” // Photographs of frontier life, 1887-1892. (h/t, Peter Risdon) // Girls making gun sounds. // Why frogs are awesome.

Readers, it’s time to acquaint yourselves with the work of Dr Graham St John, a Research Associate at the University of Queensland’s Centre for Critical and Cultural Studies and “an anthropologist of electronic dance music cultures, festivals, and movements.” Dr St John’s scholarly projects include Performing the Country: Culture, Identity and a Post-Settler Landscape, “a study of  contemporary performative contexts for the (re)production of ‘Australianness’ in the wake of recent historical and ecological re-evaluations,” and Making a Noise, Making a Difference: Techno-Punk and Terra-ism. The latter “charts the convergence of post-punk/post-settler logics in the techno-punk development in Australia” and “provides an entry to punk through an analysis of the concept of hardcore in the context of cultural mobilisations which, following more than two centuries of European colonisation, evince desires to make reparations and forge alliances with Indigenous people and landscape.”

As the texts in question may induce an urge to self-harm, I’ll attempt to convey their profundity with some visual extracts: 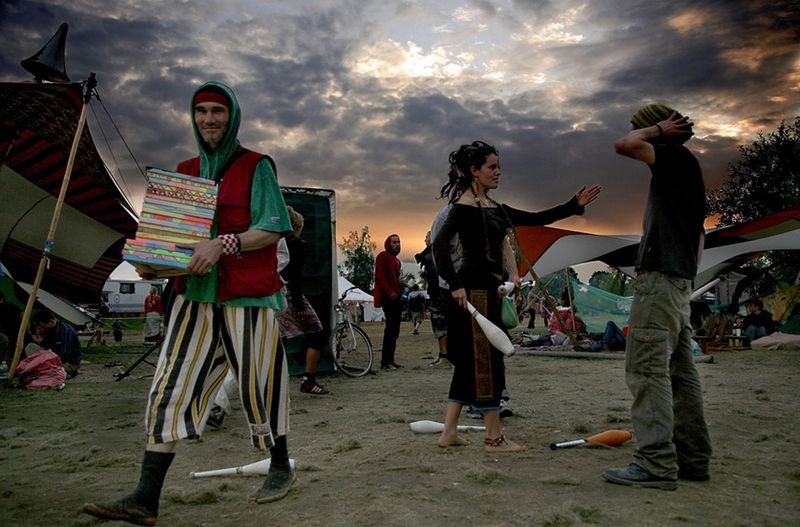 Above, a “cultural mobilisation.”

The Thrill of Scaffolding 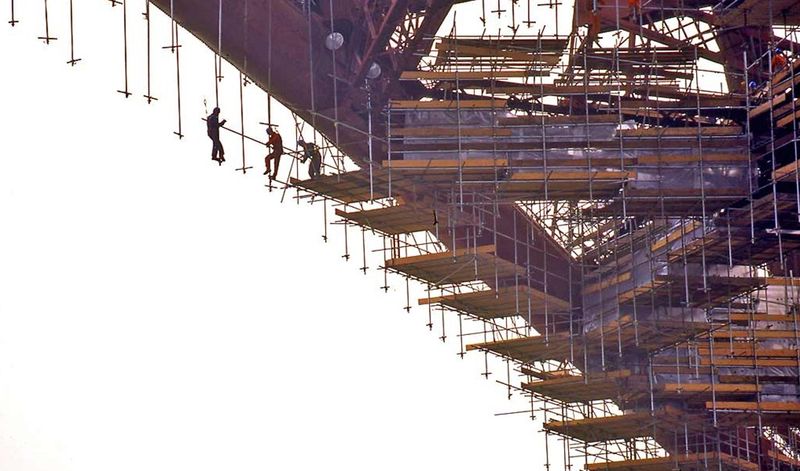 Workers on the Forth Rail Bridge, North Queensferry, 1996. Photographed by Peter Stubbs.

Continue reading "The Thrill of Scaffolding" »

After weeks of covering the Wisconsin protests (touched on here), Ann Althouse and Meade now poke through the dregs.

“The planned economy… it works throughout Europe.”

A brief history of title design.

By Ian Albinson. Film listing here. And these may be of interest.

A Puffing of Chests

When it comes to the less reputable quarters of academia, you’re a cold-hearted, cynical bunch. Oh, don’t deny it. Some of you chuckled wickedly at that mistress of limpid prose Dr Caroline Guertin and her Quantum Feminist Mnemotechnics. Some of you managed to turn the infinite nuance of artistic theory into bawdy comedy. Others somehow found amusement in Professor Sharra Vostral’s musings on the politics of menstruation and her discovery that the humble tampon is “an artefact of control.”

I mean, really. You people are such heathens.

It’s with some trepidation, then, that I share the latest find by TDK and Mr William Briggs - Stuff Academics Like, a compendium of curios from our Towers Of Learning. One of its regular features is the Guessing Game series, where readers are invited to ponder a list of imposing conference papers and lecture titles in order to fathom which of them is the imposter. Below are a few contenders from a recent list, only one of which is officially hokum. Feel free to take a shot.

The Support Belt Fetish: An Example of Psychoanalysis.

Not sure? How about,

The True History of His Beard: Joaquin Phoenix and the Boundaries of Cinéma Vérité.

Exemplarity – The Real: Some Problems of a Realist Exemplarity Exposed through the Channel of an Aesthetic Autopoeisis.

Or could it be,

Nope. They’re all actual contributions to the broadening of our minds and the swelling of the culture.

The imposter, of course, is,

Guattari and the Onomatopoeic Imperative: Decentering the Archaeologies of the Speech-Act.

Which is obvious now that I’ve pointed it out. Oh, there’s more.

Mary Grabar on Wisconsin and the activist curriculum.

Despite all the accoutrements of 1960s protests - the drumming, chanting, human chains, sit-ins, sleep-ins, teach-ins, and teach-outs inside the Wisconsin capitol - the issue is the retention of political power through Big Education. Unions are necessary to maintain this power. The professors are using their classroom bully pulpits to shape “change agents” who will protect their jobs by picking up bullhorns and sleeping on the floors.

More on those “change agents” and their big, warm hearts here. For an overview of eroded academic probity, see Horowitz and Laksin’s One-Party Classroom.

The ‘collective bargaining’ being ‘busted’ here is a money-laundering scheme that has union leaders taking money from the taxpayers that the taxpayers can ill afford (and can’t themselves ‘bargain’ on), giving it to teachers in raises and benefits, collecting it back in forced union dues, and then funnelling that money back to the Democrat party at a rate of 96%.

The absurdity of the Democrats’ outrage was too much. They weren’t merely wrong on a procedural point. They were accusing Republicans of “making a mockery of democracy,” operating like a “banana republic,” and, in former labour secretary Robert Reich’s words, conducting a “coup d’état.” All the while, Democrats were hiding in another state trying to prevent a newly inaugurated senate from holding a vote on vital state business. But in the end, senate Republicans had found a way to vote. The Assembly passed the bill on Thursday. Scott Walker signed it into law on Friday. And that is what democracy actually looks like.

From here, inversion seems to have been a recurrent theme of events in Wisconsin. As when activist doctors invoked the virtue of “public service” while handing out fake sick notes to absentee teachers, thereby leaving the taxpayer with a multimillion-dollar bill for work not done. Maybe that’s the “social justice” we hear so much about.

One charming detail of the protest was this comment,

A theme eagerly seized upon by other brave defenders of The Working Joe. Strange how readily supposed egalitarians resort to class condescension.

And Yet I Want One

Made of oak, walnut and aluminium, a box that turns itself off.