They Exist on a Higher Plane, You See

Art is really about ideas. It’s not about looking at things.

According to the Guardian, Mr Rugoff is “one of the most highly respected curators on the global contemporary art scene” and has “shaken up art audiences on both sides of the Atlantic, inspiring them to engage with the kind of puzzling, cerebral work that tends to put off all but the most dedicated of contemporary art aficionados.” Prior to his moving to the Hayward, we learn that Mr Rugoff “curated a survey of invisible art that included paintings rendered in evaporated water, a movie shot with a film-less camera, and a pedestal once occupied by Andy Warhol.” Such was the unspeakable daring of this invisible art venture, Mr Rugoff has seen fit to repeat it, daringly, at the Hayward. Now Londoners can gasp in wonder at Gianni Motti’s empty frames and Tom Friedman’s blank piece of paper, at which the artist supposedly stared for a very long time. If the colossal cleverness of it all is too much to endure, art lovers may wish to extend the premise by not being visible either.

Setting aside the gallery’s standard blather about “diverse aesthetic practices and concerns” and “using invisibility as a metaphor that relates to the… marginalisation of social groups,” one can’t help but feel that conceptual artists are in fact tragic figures, or tragicomic at least. By and large they’re the leftovers, the dregs. They’re the people who weren’t good enough to get a job in advertising. Having abandoned craft, aesthetics and mere looking at things – and with them, any sense of wonderment or joy – what’s left is typically hackneyed, desperate and gratingly self-conscious. And so, for instance, arch conceptualist Stefan Brüggemann - whose work allegedly “re-presents something which is absent” and “comments on the absence of conceptual art, because conceptual art no longer exists” - attempts to explode our brains with this: 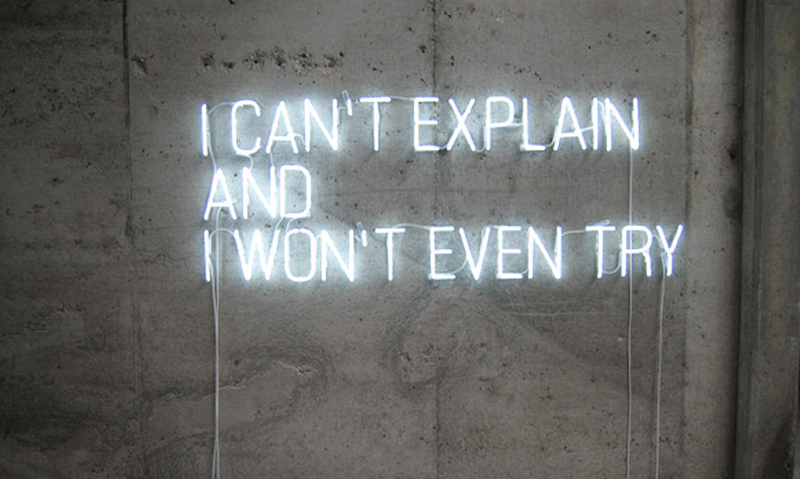 And of course this mighty conundrum: 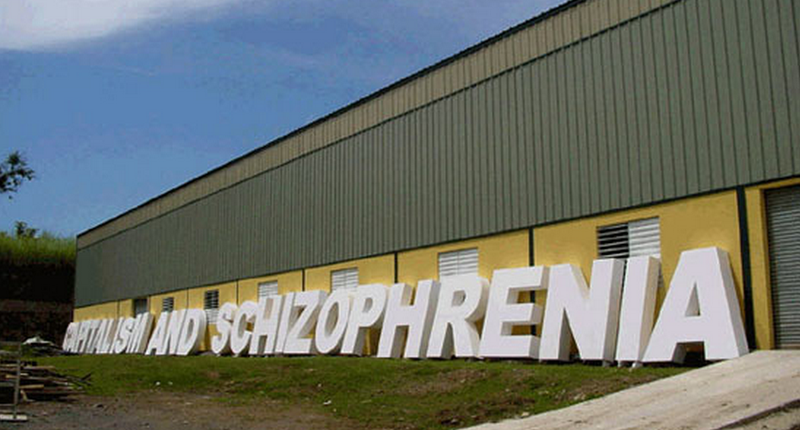 At which point, it may be instructive to contrast Mr Brüggemann’s lofty offerings with some products of capitalism.

This, you’ll note, is just an advert for seatbelts.

And here’s an advert for skydiving classes.

Base commerce, see. It requires one to look at things. And gosh, how embarrassing is that?

Ultimately, a lot of this nonsense is for phonies who can't draw and expect us to slobber over the dross of the untalented.

It’s worse, I think, than that. For people who think art is “about ideas” and being “cerebral” rather than “looking at things” or developing visual skill with a particular medium, there’s another problem. The craft of image-making, the skill it requires, is often where ideas come from. This may help explain why, for instance, Brüggemann’s Capitalism and Schizophrenia doesn’t even seem to be “about ideas.” Despite the ponderous title, it doesn’t impart any new information or articulate any interesting connections. It just lets visitors to the ICA know that Brüggemann has read (or is vaguely aware of) Gilles Deleuze and Félix Guattari, both of whom are considered names to drop by the terminally pretentious. Or the sort of person who visits the ICA in order to be seen visiting the ICA.

And so we get a lot of phonies who can’t think either.

I think you've underestimated these 'artists' intelligence, looks like they've found a way to get paid to doing absolutely F all, genius.

Wondering if my employer will continue to pay me if I become a conceptual solution architect and supply them with an invisible solution?

@Nigel: "Wondering if my employer will continue to pay me if I become a conceptual solution architect and supply them with an invisible solution?"

You mean, you want to work for Capita?

'This may help explain why, for instance, Brüggemann’s Capitalism and Schizophrenia doesn’t even seem to be “about ideas.” Despite the ponderous title, it doesn’t impart any new information or articulate any interesting connections. It just lets visitors to the ICA know that Brüggemann has read (or is vaguely aware of) Gilles Deleuze and Félix Guattari...'

Which makes me wonder why certain people choose to patronise, or even celebrate such gestures. I can only assume that they haven't yet realised how short life is. The tools.

"Capitalism and Schizophrenia" As we gather he doesn't like more efficient forms of barter and comparative advantage, i.e. he thinks Capitalism is an insult, is he not being insulting to the blameless mentally ill by placing them together?

Or who can draw, but discovered there was more fame in money in not doings so - or doing so with an intentionally questionable degree of skill. Like Pablo Picasso. Who also discovered he would be liked more and thus receive more accolades and cash money if he affected an affection for Communism.

For the true artist, daring, sacrifice, and integrity of ideals are essential, you see. We would never have CAPITALISMANDSCHIZOPHRENIA without them.

A pity we can't pay them for their "invisible art" with just the sound of money, rather than real taxpayer dollars. Or is the arts council at least smart enough not to fall for this crock of BS?

If art isn't about looking at things, I don't have to visit their gallery! Win-win!

“Which makes me wonder why certain people choose to patronise, or even celebrate such gestures.”

What’s funny is that the Independent, like the Guardian, assumes that people who aren’t impressed by the daring of it all must therefore be scandalised: “In a move certain to leave art traditionalists apoplectic with rage…” Well, you don’t have to be a spluttering cartoon ‘traditionalist’ to find it all rather hackneyed and naff. As Mick notes, it’s all been done, badly, so many, many times.

“A pity we can’t pay them for their ‘invisible art’ with just the sound of money, rather than real taxpayer dollars.”

The Hayward, which receives Arts Council subsidy, is charging £8 for entry. And for that you get to see a nondescript plinth that Andy Warhol stood on very briefly and a blank piece of paper that Tom Friedman once stared at. Bargain! And if you’re trying to pitch the same old tat as edgy and controversial – Yoko Ono, for God’s sake - then shafting the taxpayer is pretty much obligatory.

Prior to his moving to the Hayward, we learn that...

Tsk. "Prior to" is a pretentious Latinate variant of Anglo-Saxon "before". It is echt Guardianese (a bit like echt). What's wrong with "Before he moved..."?

The Guardian and its "community" have been pissing into the well of English for decades. Let's not join in.

At some point one has to believe that this is just some colossal in-joke and they are not so much artists as comedians, trying to one-up each other as to who can sell the biggest pile of refuse as art. "Empty frames? Is that all you've got? How about sitting around thinking about art?!?" We wait for them to let the veil slip to reveal this as the final punchline and declare the winner but it never comes. Damn, they are serious about this!

Art is really about ideas. It’s not about looking at things.

Er, why does art have to be about anything?

"Art. A guy I knew in high school." John Brunner in Stand on Zanzibar.

“Er, why does art have to be about anything?”

That’s the nub of it, I suppose. If an image (or sculpture or whatever) is beautiful and captivating, it doesn’t need to be about anything. It’s justified by being pleasing. But if artists are encouraged to sneer at beauty and pleasure as bourgeois and insufficiently intellectual, then the artist, or pseudo-artist, is left trying to justify why the blank canvas or empty pedestal deserves attention and cash. But supposed cleverness is a very poor substitute for obvious artistic skill. And then the art bollocks ensues.

Heh. I’d better stand on the Box of Shame with hot coals in either hand.

And another thing: did Stefan Bruggemann actually make his neon sign or the big letters that spell out "CAPITALISM AND SCHIZOPHRENIA"? Of course not. He had these things made for him by skilled artisans, thereby making his work not merely meretricious but truly inauthentic. And I thought these pretentious tossers were all about the authenticity.

"As Mick notes, it’s all been done, badly, so many, many times".

Yes, indeed. And pace the wolf, above, decades ago these "subversive" art movements often employed some humour at least. They were often joyful and silly. These days the artist-subversive is a bloodless, po-faced fellow, I fear. But isn't it odd that the Islington types who are so alive to nuances of fashion, and pride themselves on being so up-to-the-minute culturally, are nonetheless immune to the dreary samyness of the kind of "art" you draw our attention to here so often?

"...it doesn’t need to be about anything." I would argue the reverse. The greatest is about something - it has a narrative, characters, symbolism; it just doesn't hit you in the face with it. The problem with this doltistes is that their narratives are false, their characters hollow, their symbolism empty. They are narcissists making narcissistic art for collectors motivated to praise or purchase their "art" by narcissistic pretensions - or at least ambitions to rise (sink) to the narcissistic pretensions of others.

Even the most "bourgeois" of older movements produced far deeper, and truer work:
http://en.wikipedia.org/wiki/The_Bookworm

In Southend High street, the local council decided to use the railway bridge as a 'canvas' for artists, as seen here:

Now, there's a plaque to the side which explains the artwork. But, this being a typical English council, often the art is removed a few days before the plaque ('Different departments, guv!') and I've often seen people staring at the plaque, then up at the (empty) bridge, in a quizzical fashion.

I'm sure they don't realise. They must just think they don't 'get' the art...

Jonathan Jones should at least have the decency to publish his home address and offer his own property as a canvas for some of that “irrepressible creativity.” Otherwise people might think him a twat.

'Jonathan Jones should at least have the decency to publish his home address and offer his own property as a canvas for some of that “irrepressible creativity.”'

Indeed. One or two commenters below the line have already made that suggestion, but he hasn't responded yet. Though another Guardian staffer has weighed in with:

'Along the canal around the Olympic site some of the graffiti is extremely good and makes up part of the area's charm. It wouldn't be there if the locals hated it.'

Get that? They must have asked all the 'locals' for permission first, presumably.

Wo. That's a new one. So does this principle of assumed approval only apply to graffiti, or can it be applied to other forms of vandalism?

Like, for instance, if a complete stranger breaks one of the windows on my car for no reason (which, ho ho, happened recently) it's because I'm okay with it happening?

Or am I misunderstanding the Graun staffer's point?

This is the moral universe of the Guardian and of the radical left. It’s cool when it’s done to other people.

This is what Tom Wolfe exposed long ago in The Painted Word.

The money comes from wealthy bourgeois who want the cachet of not-bourgeois that comes from associating with the avant-garde: "honorary aides-de-Cong of the Revolution", in Wolfe's phrase.