Yes, But is it Big Enough? 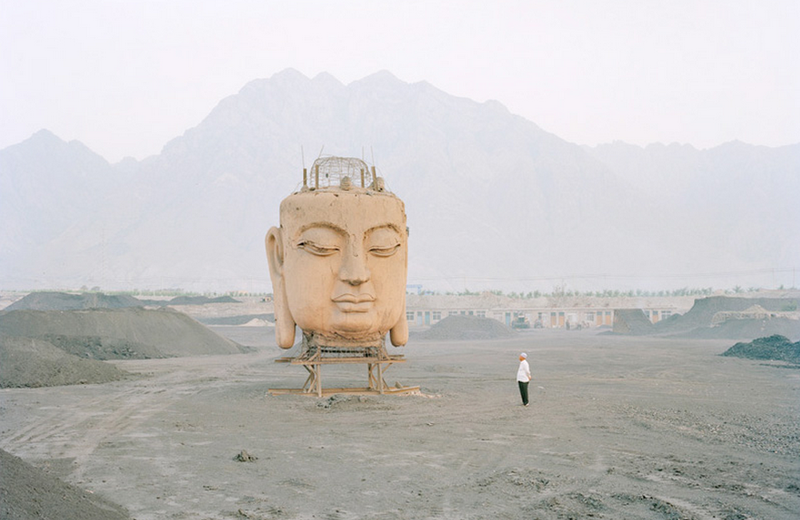 Photograph by Zhang Kechun. One of these. Via Mick.

The Devil Made Me Buy That Dress

Another classic sentence, this time from the Guardian’s Jill Filipovic, who tells us:

Somehow, big food companies have convinced us that drinking a 32oz soda is a matter of personal liberty, and that the government has no place in regulating how much liquid sugar can be sold in a single container.

Apparently those evil food companies have – somehow, nefariously - made some of us consider the proper role of the state and whether it should have any business telling people what size beverage they may drink while watching a three-hour film in the local multiplex. Yes, that must be it. How else can we explain the fact that not everyone agrees with Jill Filipovic?

“Slightly rubbery, which picks up any residue off your fingers and makes the knob look dirty. The rotation is ever so slightly off axis. The click isn’t too satisfying.”

“Nowhere near enough depth, and too much weight to the rotation. Also lacking in knob grip.”

“Great weight (not too heavy, not too light), and lovely stiffness.”

Via Anna, via MeFi.

For newcomers, more items from the archives.

All Pop Music Will Henceforth Be Terrible.

Making vaguely alternative pop music is, it seems, all but impossible without indefinite subsidy, an Arts Council grant, a subsidised spell at art school and a bohemian squat to call your own. Yes, these young titans of the left need the state to make them edgy and countercultural. And there can be no better use for taxpayers’ money than indulging would-be pop stars while they become “class conscious” and find themselves, musically. However long it takes.

If what these educators want sounds a bit like grooming, a little predatory, that’s because it is.

The problem is that adversarial role-play, like that of leftist academics Furr and Garelick, has little to do with reason, refutation or how the world actually is. It does, however, have a great deal to do with how those concerned wish to seem. In order to maintain a self-image of heroic radicalism - and in order to justify funding, influence and status - great leaps of imagination or paranoia may be required. Hence the goal posts of persecution tend to move and new and rarer forms of exploitation and injustice have to be discovered, many of which are curiously invisible to the untutored eye. Thus, the rebel academic tends towards extremism, intolerance and absurdity, not because the mainstream of society is becoming more racist, prejudiced, patriarchal or oppressive – but precisely because it isn’t.

Which may explain the doublethink of Mr Arun Smith.

You’ll Notice They All Wear Shoes.

San Francisco’s radical nudists are remarkably needy. Your children must, simply must, see their genitals.

Imagine you’re out shopping with the kids in tow and having to weave your way through large groups of unattractive men waving their tackle at you. One doesn’t have to have “unrealistic issues of body shame” to find the exhibitionism tiresome or inappropriate. And the denials of any sexual aspect are also unconvincing, especially given that so many of the participants are enthusiasts of fetish clubs and websites catering to people who like public sex and scandalising others, and for whom the whole point is to have an audience, whether titillated or repelled. It’s rather like how the people at last year’s ‘protest’ claimed they just wanted to be left alone - while squealing for attention on a traffic island in the middle of a busy intersection.

Monbiot and the Morlocks.

Maybe George wrote the article to show us how difficult it is to be virtuous, indeed heroic, at least as he conceives such things. I suspect, though, that any moral lesson is quite different from the one intended. You see, George believes in sharing, by which of course he means taking other people’s stuff. Yet he’s remarkably unprepared for that favour being returned. Say, by two burly chaps with neck tattoos and ill-tempered dogs. And as these burly chaps were members of a “marginalised group,” and therefore righteous by default, George was expecting noble savages. Alas, ‘twas not to be.

There’s a world of wonder in the greatest hits.

His party’s view of the spending question is, indeed, ingeniously delusional. The Democrat leader in the House of Representatives, Nancy Pelosi, has said, “It is almost a false argument to say we have a spending problem.” (I love that “almost”.) Her party whip, Steny Hoyer, asserted that the country does not have a spending problem at all – it simply has a “paying-for problem.” (Imagine your teenage child explaining that he needs an advance on his allowance, not because he has spent too much money but because, for some peculiar reason, he just can’t pay for everything he has bought.)

Mark Steyn on the same:

The annual “deficit” has been over a trillion for every year of Obama’s presidency. The cumulative deficits have, in fact (to use a quaint expression), increased the national debt by $6 trillion. Yet Obama claims Washington has “reduced the deficit” by $2.5 trillion and all we need to do is “finish the job.” Presumably this is a reference to allegedly agreed deficit reductions over the next decade, or quarter-century, or whatever. In other words, Obama has saved $2.5 trillion of Magical Fairyland money, which happily frees him up to talk about the really critical issues like high-speed rail and green-energy solutions. […] Maybe it’s just me, but the whole joint seems to be seizing up these days: The more “activist” Big Government gets, the more inactive the nation at large.

Via Simen, and somewhat related, Milton Friedman on the minimum wage. See also this:

Despite the wishful thinking of politicians like President Obama, the laws of supply and demand are not optional.

A random thought from Thomas Sowell:

In the modern welfare state, a vote becomes a license to take what others create - and these others include generations yet unborn.

And Brian Micklethwait is reading Madsen Pirie’s Think Tank: The Story of the Adam Smith Institute. He quotes the following, on the subject of state-run telephony in the late 1970s:

We needed a telephone and a photocopier. We were told by the Post Office, which ran the state monopoly telephone service, that there was a fourteen-month wait to have a line and phone installed. We somehow bargained them into doing it within six weeks by pointing out that our predecessors in the building had used a switchboard with four separate telephone numbers, one for each of the companies that had used the place, and all we wanted to do was to reactive one line. Until the GPO engineers came, we had to conduct all the new Institute’s business from the public call box on the corner, and we ensured we kept a ready supply of coins for the purpose.

One of our friends, telephoning family in South Africa, was surprised when a telephone engineer entered the conversation to say that because the call did not sound urgent, he was disconnecting it. The union had ‘blacked’ non-urgent calls to South Africa, and its members monitored private calls to enforce it.

Time for another classic sentence from the Guardian. And so, via Julia, let’s bathe in the mental radiance of VJD Smith, a “feminist mother of two who works in publishing”:

As a teen anorexic, I found diet yoghurt ads hard enough. I don’t know how I’d defend myself from the everyday body hatred now.

These days you don’t even have to buy a magazine to absorb the body hatred.

Stoicism and a sense of proportion are not standard fare at the left’s national newspaper, and so we also get quite a bit of this:

This evening, shopping at Sainsbury’s, I was greeted by the following headlines, in bold capitals and at eye level, as I entered the store: WEIGHT TORMENT (New! magazine), OUR BODY WARS (Star), BODY PANICS! (Heat)… The very existence of these things can mess with your head. You can try to avert your eyes as you head for the fruit and veg but if you look back once – sneak even the slightest glance – all this can send you straight to the cake counter for yet another miserable pre-starvation-diet binge.

Such crippling intrigue, all at eye level. In bold capitals, even.

Ms Smith, a grown woman, has yet to embrace the incredibly radical solution of not being interested in Heat magazine, which is, I think, a little odd. For a grown woman. Such magazines, and their readers, were ridiculed 20 years ago in Absolutely Fabulous. And it is, after all, quite possible to breeze round the local supermarket without finding oneself emotionally gripped by the latest travails of Kerry Katona or the Kardashian sisters, none of whom I could reliably identify, or by the latest breathless opinion on hemlines, weight loss or pubic waxing. And yet many of the Guardian’s supposedly sophisticated and freethinking columnists - feminists, even - find not being interested inexplicably difficult.

And Then Something Went Horribly Wrong

Apologies to readers whose comments failed to materialise over the last couple of days; apparently it was due to the TypePad spam filter having a fit of random hypersensitivity. It also blocked your esteemed host, which is sort of funny. Now. If anyone still has trouble with their comments, do email me.

Continue reading "And Then Something Went Horribly Wrong" »

Chris Snowdon on the dishonesty of ‘minimum price’ lobbyists and the prohibitionist tendency:

There is much more that could be said about this thinly veiled piece of lobbying. The inexplicable lack of a control group, for example, or the mystery of why official hospital records were not enough for the authors - instead they created their own “estimates” of how many people died. But the bottom line is that these people are lying with statistics. The result - and almost certainly the intention - of their study is to make people believe that fewer people died of alcohol-related diseases in British Columbia between 2002-09 as a result of minimum pricing. “Nearly a third” fewer in fact.

Theodore Dalrymple on an appetite for doom:

The apocalyptic pessimist… believes that the end of the world is nigh, and secretly is rather pleased about it. If he is of a scientific bent, he does the following: he takes an undesirable trend and projects it indefinitely into the future until whatever is the object of the trend destroys the world. For example, he might take the fact that Staphylococci reproduce exponentially on a Petri dish to mean that, within the week, the entire biosphere will consist of Staphylococci and nothing else. Man will be crushed under the weight of bacteria. Paul Ehrlich is of that ilk. His belief in the end of the world precedes his belief in any particular cause of it.

Thinking, it will be recalled, is the activity one performs before one has arrived at the answer.

60% higher is an interesting definition of lower, isn’t it?

Note Ms Lucas’ use of the term “demand management.” Feel free to share your own links and snippets in the comments.

Gravity is a Mistake

A mistake that the Institute for Centrifugal Research works tirelessly to correct. The ICR’s “pioneering achievements in the realms of brain manipulation, excessive G-Force and prenatal simulations” are illustrated, quite vividly, in Till Nowak’s short documentary, presented below. I beg you, please, wait for the ‘wedding cake’ amusement ride.

Via Things, a site you may want to bookmark.

Incidentally, this blog is six years old today. So cake for everyone.