And Now Some Art
Friday Ephemera

While we cower in the shadow of Laurie Penny’s mind, here’s another bite-size agony for our ongoing series: 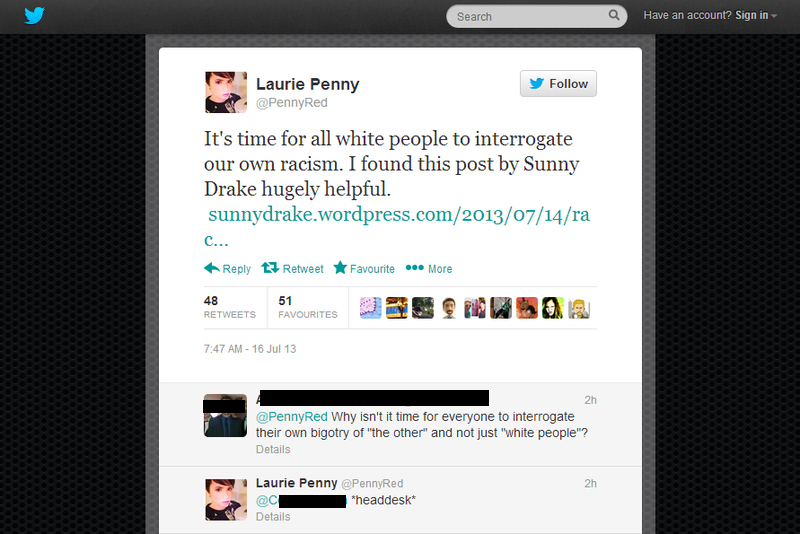 The article Laurie finds so inspiring – Racism is to White People as Wind is to the Sky – can be found here. Its profundities include,

In the outpourings of grief and anger about the Zimmerman verdict, I’m asking myself and other white people: how are we reflecting on and actively transforming our own personal racism? And our collective racism? ...Because white people: we are ALL racist... White people, the shame is not that these racist things come up in us – growing up in a white supremacy, it is impossible for them to not. The shame is when we deny it, refuse to do the work and therefore turn our backs on our sisters, brothers and genderqueer siblings of colour.

The standard psychodrama ensues and the ostentatious fretting gets a little knotty, as it must, not least when the subject turns to “white privilege.” Damning evidence of which includes,

The times when I have assumed people of colour and Indigenous people have drinking or substance problems when I see them drinking or using in public. I am in fact an alcoholic, yet nobody thinks that of me if I’m seen drinking in public.

When I have gotten acquaintances who are people of colour confused with each other. It doesn’t matter that I also frequently can’t recognise white people who I don’t know very well – this is where context matters. In the context of a racist world that makes invisible and dehumanises people of colour, my actions are racist.

When I have failed to understand the ways a police presence could impact on the participation of criminalised communities, especially Black and Indigenous communities. Any time I have invited police presence or failed to take steps to deter it, this is my ignorant racism showing up.

So remember, if you should be mugged in a part of town where lots of black people happen to live, whatever you do, don’t call the police. That would be proof of your ignorant racism and “white privilege.” And if your refusal to alert the police subsequently results in someone else being robbed by the same mugger, most likely someone who lives in one of those “Black and Indigenous communities,” at least you can take comfort in the fact that you won’t be accused of racism by one dogmatic bonehead. If this is all sounding a little odd, a little contrived, it may help if you bear in mind the unspoken motto of identity politics, grievance theatre and leftism in general: “I am better than you because I pretend to feel worse.” It’s important to understand these are not just lapses in logic or random fits of insincerity; these outpourings are displays – of class and moral elevation. It’s what egalitarians do. Laurie nods in approval of course, as a good little leftist should. As we’ve seen before, many times, some kinds of stupid have to be educated into the children. Because spanking one’s own arse is what good children do. And the most susceptible of those children, the most needy and credulous, go on to call themselves leftwing radicals.

Update via the comments,

I suppose what’s dismaying, or possibly amusing, is how readily the people above have internalised a redefinition of racism as “prejudice + power,” a formulation that doesn’t stand up to more than a moment’s questioning. This commenter, for instance, says that only white people need to “interrogate” their assumptions: “Um, cuz white people are the ones in power.”

It’s a glib reflex lifted straight from the racial grievance racketeers Shakti Butler and Jane Elliott, whose mind-blunting blather can be paraphrased like this:

Racism is exclusively a function of power, as defined by me. As a member of Designated Victim Group X, as designated by me, I do not belong to the dominant order; I do not have institutional power or the leverage of ‘normality’, therefore I cannot be racist, ever. All those who belong to the dominant group, as defined by me, participate in racism, also defined by me. They are racist because they are white. They just are, so shut up. Those who dispute this formulation are, by definition, racist and oppressive.

And so a belief that only white people need fret about their bigotry, being the only ones capable of such sin, is stated flatly, as if the matter were inarguable and utterly beyond question. Which rather makes me wonder how those who make such noises would rationalise crimes like this one. If power, as defined by them, is something that only people of pallor can have, the lone white tourist in the videos linked above – the one being punched, robbed, stripped, molested and having his teeth kicked out by a mob of ten black thieves, while others film his beating with audible amusement – he was the one with all the power. Obviously.

You also have to wonder how this unilateral definition of racism would address another incident, from March 2012, in which a 13-year-old Missouri schoolboy was followed home and attacked by two black teenagers. The teenagers told their victim, “This is what you deserve. You get what you deserve, white boy,” then doused him in petrol and set him on fire. Presumably, we should pretend that those racial overtones do not exist – cannot exist - on grounds that the perpetrators don’t belong to a “racist system” of “white hegemony.” If these examples aren’t enough to prompt some rethinking, there are more to consider. Again, are we not supposed to notice those racial motives and racial fixations? Should we just regard such behaviour as, what, righteous retaliation for some collective sin? For something other people did, at some point, somewhere, to some other people?

And those who ignore such details, or who tie themselves in rhetorical knots trying to rationalise them away, they are the “critical thinkers” on whom our “progress” depends?

While we cower in the shadow of Laurie Penny’s mind, here’s another bite-size agony for our ongoing series:

The article Laurie finds so inspiring – Racism is to White People as Wind is to the Sky – can be found here. Its profundities include,