Because 3D-printing with Easy Cheese isn’t as easy as you might think.

Are You Not Feeling the Positive Vibrations?

And so we turn our attention to Santa Barbara City College, where creatively-inclined students have been “exploring issues and practices of… interactive and chance-derived work.” Specifically,

Students harnessed complicated architectural designs and intricate woodworking to create an artistic teepee, which they set up on one of the quad’s grassy knolls earlier this month. As the student newspaper reports, the four art students who built the teepee saw it as “a place of positive vibes and community engagement.”

Assembled from “upcycled and reclaimed material from an old farm house,” and “lined with pillows and rugs,” the students’ vibe-enhancing structure “provides a comfy, squishy environment” for music and conversation. Also included in the experience is “a shelf of blank books for people to express themselves in written word.” Engorged with positivity, the students posted an invitation for others to partake in their creation:

Join us to support the opening day of an amazing art event and large scale installation… The piece harks back to ways of the past in American history while juxtaposing current counter culture with futuristic elements that bring it to life.

It even glows in the dark.

We want to provide you with an experience out of the mundane - right here on campus! Celebrate our labour of love with live music, refreshments and a trading post! That’s right, bring something to trade and become part of the installation.

Oh, come on. Who could resist so much switched-on grooviness? Surely what followed was a day of vibrant self-expression and communal hugging?

Continue reading "Are You Not Feeling the Positive Vibrations?" »

The Language of Progress

Via ac1, a little something from the Independent:

“Oh but, it’s racist to ban someone on the basis of their skin colour, and sexist to ban them on their gender,” cry the assembly chorus of confused souls trying to turn the language of progress into a weapon to further entrench the establishment. It’s not. You’re at university, go and ask a humanities professor. Learn something.

The anonymous author, described only as a “British journalist,” imagines that “people don’t give a toss about their student unions” because they’re “too stunted by white men.” White men who should therefore be “banned” from student politics, forever, in favour of “powerful women and minority ethnic people.” Actually, I suspect the chief repellent is the fact that student union politics attracts so many people who are eerily like the author of the above article. But hey, don’t listen to me, ask a humanities professor.

And then radically repeat whatever you’ve been told.

An agony of sorts, spotted by Julia and several others during the National Union of Students’ currently ongoing Women’s Conference:

No, you mustn’t laugh, says the Independent’s Andrew Griffin. Because clapping in support can break a woman in half:

Posted at 08:33 in Academia, Agonies of the Left, Anthropology, Politics, Psychodrama | Permalink | Comments (101)

Madsen Pirie on the power of our fluffy and benign state broadcaster:

The BBC is responsible for more than one in 10 criminal prosecutions. Culture Secretary Sajid Javid reports that 10% of magistrate court cases are for non-payment of the BBC licence fee. Non-payment is a criminal offence, punishable by a fine of up to £1,000. Every week about 3,000 people are fined for non-payment, and about one person a week is jailed for non-payment of the fine. Women make up about 70% of those prosecuted and convicted, and half of those jailed for not paying the fine. When people fail to pay other utilities, such as energy companies, they are guilty of a civil offence, not a criminal one, and they cannot be prosecuted and fined for falling behind with their payments. Civil action can be taken for recovery, but without fines and jail terms.

The most common statistic thrown out these days by President Obama, Vice President Biden, on down is that one in five women will be the victims of sexual assault during their college careers. Detroit is America’s most violent city. Its violent crime rate for all four violent felonies — that’s rape, murder, aggravated assault, and robbery — is 2%. Its rape rate is 0.05%. A 20% crime rate for any crime, much less one as serious as rape, is virtually unheard of... And yet despite a rape rate that is allegedly 400 times that of Detroit’s, sophisticated, highly educated baby boomer mothers are beating down the doors of campuses to try to get their daughters in. […] If the rape epidemic was going on as claimed… there would be no more campuses. You would have had a massive exodus of girls from college campuses years ago, and a demand to create actually safe environments for student learning. Why hasn’t that happened? Because the campus rape epidemic does not exist.

And Steven Hayward quotes several academics who tire of feminist melodrama and the politics of the mob:

Personally, liberal [i.e., leftist] students scare the shit out of me. I know how to get conservative students to question their beliefs and confront awful truths, and I know that, should one of these conservative students make a Facebook page calling me a communist… the university would have my back. I would not get fired for pissing off a Republican… The same cannot be said of liberal students. All it takes is one slip — not even an outright challenging of their beliefs, but even momentarily exposing them to any uncomfortable thought or imagery — and that’s it, your classroom is triggering, you are insensitive, kids are bringing mattresses to your office hours and there’s a Twitter petition out demanding you chop off your hand in repentance.

But remember, you mustn’t say no to them. Because that one tiny word is now “violent language,” for which you will be “held accountable.”

Feel free to share your own links and snippets in the comments. It’s what these posts are for.

The Politics of Ogling

As clarified by our dear friend Laurie Penny:

In shocking news, it seems the concerns of Oxbridge PPE graduates living in Islington aren’t the same as an electrician from Essex.

From the comments following this.

And which perhaps explains why the Guardian, the foremost national organ of the British left, publishes so many articles like this one, in which the author openly sneers at his proletarian inferiors and their “ugly” recreational habits. Specifically, working class barbecues, with their “blokey chat” and “low-grade sausage meat,” and where heteronormativity “really drains the joy from the summer breeze.” Heavens, how ghastly:

If there is anything... more oppressively penetrating than the conversation of four suburban men discussing how to light and then operate a barbecue, I have yet to hear it.

And as we’ve seen, many times, such lofty thoughts – and the subsequent self-congratulation, in which rebuttals and factual corrections are construed as validation - are not random anomalies but standard fare.

Let’s Talk About Our Feelings

In an eye-widening article that I recommend reading in full, Paul Sperry takes a look at ‘progressive’ education policy and its consequences:

Thanks to talking circles and peer juries, “young people are now taking control of the environment,” Education Secretary Arne Duncan gushed in a 2014 speech to black students at Howard University. “It’s sort of a counter-intuitive thing for many of us as adults, but the more we give up power, the more we empower others, often the better things are,” Duncan added. “And empowering teenagers to be part of the solution, having them control the [classroom] environment, control the culture, be the leaders, listening to them, respecting them — when we do that, wonderful things happen for kids in communities that didn’t happen historically.”

A development repeated elsewhere, in Chicago, Los Angeles, Philadelphia, Oakland, Santa Ana and Syracuse, and all of which is no doubt bewildering to such educators as Eric Butler, a “restorative justice co-ordinator,” whose prideful mantra is “I don’t blame, I don’t punish.”

How very generous of him.

After a black high-school boy repeatedly punched his teacher in the face, sending her to the emergency room, the teacher, who is white, was advised by the assistant principal not to press charges. The administrator lectured her about how hard it is for young black men to overcome a criminal record. Worse, she was told she should examine what role she, “as a white woman” holding unconscious racial biases, played in the attack...

A white sixth-grade teacher at a mostly black Washington, DC, school told the US Commission on Civil Rights she had similar “conversations” in which she was told that the bad behaviour of black boys is mainly the teacher’s fault. “I have been encouraged to examine and question how my own racial dispositions affect my teaching and my students,” Andrea Smith testified. During cultural sensitivity training required of school districts under restorative justice programmes, teachers are told they are largely to blame for bad behaviour of black students because they “misinterpret” African-American culture.

I’m sorry, but exactly how does one misinterpret a punch to the face?

Answers on a postcard, please.

“The rich are richer and the poor are poorer,” says the left-of-centre British newspaper, The Independent, on its front page. That phrase is so common, so facile, so glib, that it is almost a truism. Except that it’s not true… On almost every measure of absolute wealth, the poor are getting richer. Because this fact seems counterintuitive, some people scrabble around for data that seem to contradict it. The Independent’s rather tendentious use of savings as its main measure of wealth is typical… The same partiality explains why leftists clutch so determinedly at their bizarre definition of poverty as having a household income less than 60 per cent of the mean – a measure which gives Britain a greater rate of poverty than Bangladesh.

And Natalie Solent on minimum wage laws and the subsequent, inevitable, dancing around the obvious:

I came across this article asking “Why are so many Seattle restaurants closing lately?” The writer, Sara Jones, goes through the possible answers to this question at some length. Ownership changes. “Concept switches,” whatever they might be. Premises too big. Ingredients too pricey. Menus too esoteric. Too loud. Too quiet. Managers who do too much. Managers who do too little. Many and various are the potentialities diligently listed by Ms Jones. It is a little hard to see why a plague of Managers Doing Too Much should suddenly descend on so many of Seattle’s eateries all at once, though. Could there be something else behind it, some really strange and frightening phenomenon whose name no one in Seattle dare speak? […] In fairness to the author, she does discuss the effect of the minimum wage hike eventually, after having exhausted all other options. She’s doing better than many.

As Anthony Anton of the Washington Restaurant Association puts it, “It’s not a political problem; it’s a math problem.” And I was rather taken by this comment here, spotted by Sam Duncan and offered in reply to a typically pious and self-flattering leftist:

No you don’t get to get away with that. You don’t get to advocate policies [i.e., higher minimum wage laws] which allow you to use force to deprive people of their jobs and their opportunities, and then claim that those who would have provided the jobs are the heartless ones. You don’t get to trot out the insipid, mindless, tendentious talking points about how you are morally or intellectually superior when every “solution” you proffer is destructive and is based upon forcing others to do your bidding. You don’t get to decide whose job is worth preserving and whose isn’t and still claim the moral high ground.

As yet the leftist in question has not seen fit to respond. Feel free to share your own links and snippets in the comments below.

What Fresh Hell is This?

How to ruin a full English breakfast: 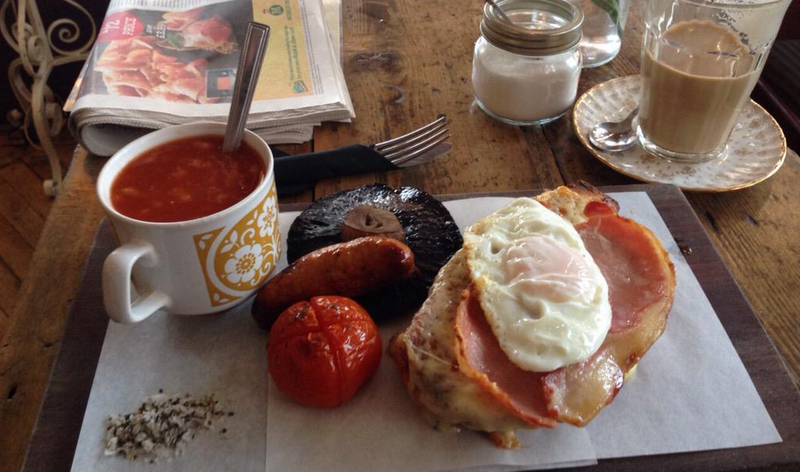 One of these. Via Christopher Snowdon.