Elsewhere (176)
Diary of a Hunter-Gatherer

The 50s post-war man could read Fleming’s Bond books and dream not only of adventure and villains in far-off lands, but of an exciting lifestyle of fast cars, beautiful women, finely tailored clothes, and exotic gourmet meals from around the world. Sadly these meals were missing from the cinematic adaptations.

What Bond eats in the novels.

Related: This audio documentary on the various Bond scores. And this, on Bond’s tailoring.

The steak came. It was accompanied by various succulent side-dishes, including a saucer of blood.

I'm sorry, blood is not food.

I'm sorry, blood is not food.

Makes the duck wrap I had for lunch look rather prosaic.

A lot of it does seem fussy and naff. For some reason it reminded me of the awful creations of Fanny Cradock.

Please tell me those are chicken wings...at first glance I thought they were dead mice. Though what the rest of that green stuff is..???...something wasabi based?

If I remember correctly, she was quite keen on artificial food colouring. So it could be pale green mashed potato, piped.

I recognize peas. Not sure what the rest of it is.

Sadly these meals were missing from the cinematic adaptations.

Throwing someone through bathroom stalls, racing boats through swamps, and tip toeing through a deathtrap funhouse all rather take time on screen, so people getting fed has to get taken for granted . . .

For a proper amount of time taken for James Bond scale food on screen, one watches Tampopo and Babbette's Feast . . . .

I thought it was one of your performance art posts.

I think part of the escapism involved recent memories of rationing which didn't end until 1954.

. . . . There might be only some fascination with randomly applied food coloring, where what comes to mind is some bog standard, non Irish, St Patrick's Day observation.

Echoing David about the surrounding . . . stuff . . . , that does look like it's somewhat cooked chicken, on peas, surrounded by mashed potatoes that have been painted green.

I thought it was one of your performance art posts. 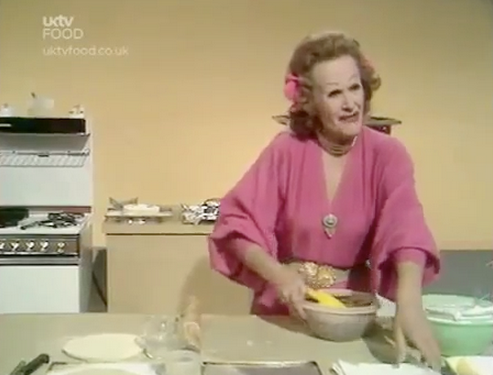 An easy mistake to make.

An easy mistake to make.

I've seen that shade of pink before!

I'm not making this up you know!!!

OK...now please tell me that's not a bath robe...or a human female.

A lot of it does seem fussy and naff.

Being hipster variety frantically lowest class does come to mind, as opposed to casually and unaffected patrician.

The Peon: The Lowest Class

Those who pass out in a metaphoric, literal, or reality show gutter, the the poser, the classless, the destitute.
The individual can and does get out of this gutter, the Actions and Indicators and Behavior do not.

Fantasizes getting mistaken for Being Executive, apparently also tends to want one's own "reality show".

One behavior favored in the early twenty-first century is being seen talking on the phone while behind the wheel of a car in motion, instead of driving.

Idealized decade being the nineteen-empties, the decade of the stylized, the superflous, the tacky, the tasteless.

When in its worst form, the trust fund child---who then gravitates towards the lower peons.

A clear and at the time ongoing example being England's King Edward VIII.

At best, the UCP finally learns to just sit in the corner and not say anything: The servants will at least keep the UCP fed, watered, washed and dressed, and the UCP is too stupid to think of trouble to get into---when the UCP does get into trouble it tends to have been some other peon's idea.

Mmm. Thinks: A Brizzola would just go down nicely. Let's see what I've got in the fridge. Oh. Cauliflower cheese it is then.

This thread reminds me of Food Wars.

A very enjoyable anime featuring a young chef-in-training at an exclusive culinary academy in Japan. The video depictions of people's responses to his cooking often verge on the NSFW:-).

I prefer Nutella on my toast.

Surely Felix Leiter would have introduced Bond to the plebeian delights of the humble cheeseburger?

As Fanny is able to take a hot baking tray out of an oven with her bare hand I suspect 'Fanny' is one of our alien overlords. (or overladies)

Surely Felix Leiter would have introduced Bond to the plebeian delights of the humble cheeseburger?

Bond laughed and dodged the question. "Come on, you crooked spy," he said. "You can buy me a drink and tell me all about it. I just don't believe in odds as long as this. In fact, you can buy me lunch. You Texans are lousy with money."
"Sure," said Leiter. He slipped his steel hook into the right-hand pocket of his coat and took Bond's arm with his left hand. They moved out on to the street and Bond noticed that Leiter walked with a heavy limp. "In Texas even the fleas are so rich they can hire themselves dogs. Let's go. Sardi's is just over the way."

Ah yes, Felix Leiter, always recalled for me as the one who was delivered back, still alive,after being in a shark tank, with a label on him that said "he disagreed with something that ate him". In "Live and Let Die".

I guarantee that you can get an excellent cheeseburger pretty much anywhere in NY for less than that. With fries and a coke (no Pepsi!).

As I recall Bond experienced a rare moment of self-loathing after over-indulging on the buttered crab and pink champagne. Could be wrong though, fifty years since I read it.

What's interesting is that in the films, because we don't see Bond eating but only hear him and others talking about it, his tastes are more exaggeratedly "fancy." More references to French dishes (but only ones the audience is likely to recognize), an obsession with wine vintage years (rather than terroir or grape varieties), and a general emphasis on expensiveness.

Book-Bond tends to eat like an upper-class 1950s Englishman on an expense account: he indulges in either some hard-to-get treats (caviar, stone crabs) or just a good old pig-out on something simple and good (spaghetti, steak).

Maybe the reason the movies had Bond bang every female he encountered was because the movies, lacking the time, weren't able to describe the food very well; so hey had to present us with sensual, exotic delicacies in a more direct manner.

'As I recall Bond experienced a rare moment of self-loathing after over-indulging on the buttered crab and pink champagne. Could be wrong though, fifty years since I read it'.

You're not wrong. It's at the beginning of 'Goldfinger'.

In the books, 007 alternates between unashamed hedonism and guilt. He also shows an ambivalent attitude to killing, and at times is surprisingly sensitive in his love life.

In the books, 007 alternates between unashamed hedonism and guilt. He also shows an ambivalent attitude to killing, and at times is surprisingly sensitive in his love life.

I'm finally getting around to a read of all of the original Fleming stories, but I do remember there's at least one bit somewhere where M is glaring at him and grumbling about Bond always or generally letting M provide the justifications for killing someone.