I’m Sensing Tension In The Room

There’s a nasty institutionalised habit of letting leftwing activists get away with the worst of offences. After all, despite forking out nearly a grand in security costs, they wouldn’t even stop the activists from storming the stage.

While visiting DePaul University, Chicago, Milo Yiannopoulos has been having a spot of bother with some of the natives.

The gentleman muttering threats of violence is Edward Ward, a political science alumnus, and apparently the protest’s ringleader. The agitated young lady, the one screeching hysterically and jabbing her fists in Milo’s face, claims to have been silenced “for 200 years.”

Full video of the event can be viewed here.

I'm not surprised at the university's actions - or lack of action - during the event. The last minute demand for a large fee for security ($2,000) was a blatant attempt to force the College Republicans to cancel the event, and it would have worked if Breitbart hadn't agreed to cover the expense precisely so it wouldn't be cancelled. If the administration tried to shut down the event, I wouldn't expect them to stop other people who are trying to shut it down.

Ironically, I think the security fee gives the CR's and Breitbart the perfect grounds for a lawsuit. They were forced to pay for a service they clearly did not receive.

Perhaps the best thing that could happen to the West is the collapse of the university system. It would be just desserts for such pervasive stupidity.

The irony is that the very thing the protesters hate the most (markets & technological innovation) means that the mass-market university system is going to collapse anyway. Probably quite soon. Certainly within 15 years.

The combination of sponsor's and alumni's de-funding of bogus SJW institutions, massive increase in online learning, via MOOCs, Khan Acadamy et al, brand new classes of certification bodies, and employer's wholesale rejection of job candidates with BLM/Loony/Agit social media histories, means the writing is on the wall for these infiltrated institutions.

The market will grade them as Junk bonds.

The joy of watching the long-march through the Universities succeed completely, and then fail completely, will be glorious.

Perhaps the best thing that could happen to the West is the collapse of the university system.

As Iowahawk puts it, 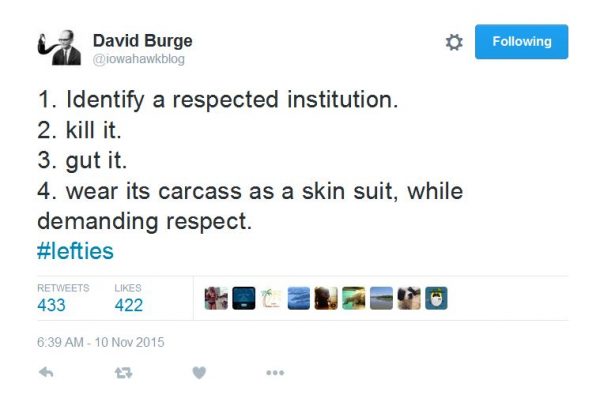