Caliban’s Mirror
Don’t Even Think It

Claire Lehmann on the denial of gender differences and its (literally) poisonous effects:

[Feminist author Cordelia Fine] argued that neuroscientists should be schooled in the theory of intersectionality — “the principle that important social identities like gender, ethnicity, and social class mutually constitute, reinforce, and naturalise one another.” At first glance, this is a peculiar demand… To practise intersectionality, one must privilege the voices of black women over white women, and the voices of women over men, for example. The least privileged deserve the most sympathy; the straight white male deserves the least. The relevance for neuroscience is unclear at best. But its utility as an ideological weapon has made it popular among academics hoping to politicise scholarship and silence their enemies.

Richard Reeves and Dmitrios Halikias on our new would-be overlords:

One overlooked irony of the events at Middlebury is how they proved some of the points that [Charles] Murray made in his book, Coming Apart, which he had been invited to discuss. The book documents the separation of a “new upper class,” raised in rich neighbourhoods, immersed in liberal, cosmopolitan values, and educated at expensive, liberal universities. In other words, it profiles the students of Middlebury College… We found that the schools where students have attempted to disinvite speakers are substantially wealthier and more expensive than average. Since 2014, there have been attempts at some 90 colleges to disinvite speakers, mostly conservatives. The average enrollee at a college where students have attempted to restrict free speech comes from a family with an annual income $32,000 higher than that of the average student in America. In the chart below, the pattern is clear: the more economically exclusive the institution, the more likely it is the students have attempted to hinder free speech.

For those who missed it, Dr Murray’s first-hand account of the Middlebury protest-cum-riot can be found here.

Jordan Peterson on “white privilege” as a rhetorical tactic:

The idea that you can target an ethnic group with a collective crime, regardless of the specific innocence or guilt of the constituent elements of that group, there is absolutely nothing that’s more racist than that. It’s absolutely abhorrent… and precisely the sort of danger that people who are really looking for trouble would push.

And Cathy Young on the dishonesties and delusions of feminist author Rebecca Solnit:

Solnit claims domestic violence is the leading cause of injury to American women; yet Centres for Disease Control and Prevention statistics show that all assault, domestic or not, ranks eighth among causes of injury to women — behind not only falls and car accidents but insect stings and animal bites.

Feel free to share your own links and snippets, on any subject, in the comments.

Are you some kind of wrecker? 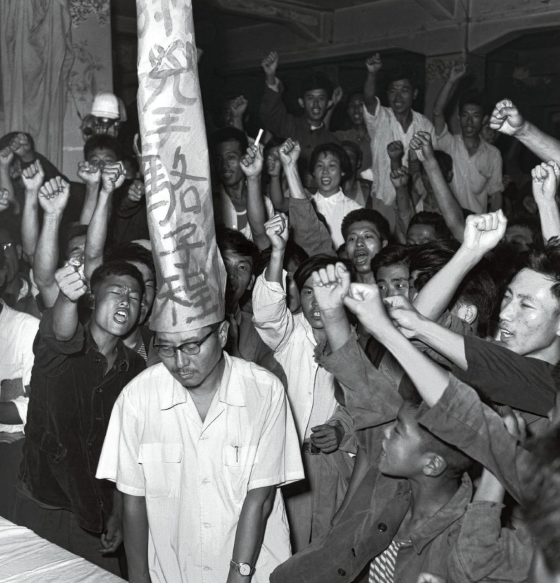 We must teach him the meaning of inclusivity!

And speaking of “equity” as meaning “equality of outcome regardless of inputs,” there’s this.

Are you some kind of wrecker?

I prefer to think of myself as a traditionalist, fighting for the integrity of the humanities and liberal arts. After all, when I was in college majoring in literature and philosophy, we knew that it was impossible to truly understand existentialism unless one did tequila shots with a coed whose shirt was lying on the floor.

What's wrong with kids these days?

I really wish Rawhide Kobayashi was a real person. Maybe if we all wish hard enough...

From one of the Twitter links on Iron Fist:


Okay, how about redo Iron Fist as a Tibetan millennial who emigrates to Appalachia and learns the ancient arts of moonshinin' and headbutts.

That would be a worthy film.

Or you could use blockquote tags.

Is there a Typepad page that lists proper tags? I went looking for one once and didn't find much. I suppose site admins can allow/disallow selectively though.

"visit the store and hold meetings there to defend their culture"

I'm guessing there might be a purity test questionnaire prior to admission. Followed by (mandatory, for the heathens) "helpful seminars".

Is there a Typepad page that lists proper tags?

Not for comments, at least not that I’m aware of. But the obvious ones are here.

As I type, Glenn Beck is interviewing a member of the Westboro Baptist Church (granddaughter of Fred Phelps) who left the church because of the interactions she had on…

She was on Twitter to "share the word" but found that (a) 140 chars doesn't leave enough room for the elaborate insults her people typically spewed at outsiders (b) she saw photos of people's kids and their lives and realized that they weren't wicked monsters (c) some people engaged her with honest questions, sans malice or retaliation, and their gentle entreaties helped her rethink her positions.

Most likely also the Touch. https://www.youtube.com/watch?v=AZKpByV5764

Every photo had an elephant in it.

She's wearing an elephant pendant, which OBVIOUSLY invokes Ganesha, a Hindu god, and what does THAT mean, mah peeps?

< a > tags are also supported for URLs.

Gleeped from Twitter, a nifty bit of UTF-8 art:

Bloody kids, with their jeans and their rap music.

Why do I get the feeling this is the new "mic drop".

"A couple of links regarding the "Hair Warrior" Carmen Figueroa:"

Imagine my shock to discover that she is a fattie...

It is a bit of a Rorschach test. I think it’s meant to be someone holding their head in weary disbelief. Facepalming, as they say.

It’s that or something sexual.

well....when you blow it up like that...it gets kinda unnatural how flattened out the one nipple becomes...and now I see somebody is missing a finger...iykwim...

The UTF-8 facepalm clearly is meant to imply slit-like eyes as of someone east Asian, and the "palm" hand contains a hidden letter "m", which clearly stands for "masculinity".

I denounce the white patriarchy in this set of symbols.

"unnatural how flattened out the one nipple becomes"

Ha! That reminded me of one of those Jordan Peterson lecture snippets where he mentions that guys (well, OK, most guys) can get all excited by two circles and a triangle.

I saw it as a fist rubbing one's closed eye, both eyes being closed.

That's a cheer sure to generate a lot of school spirit during football games.

One of the features of San Francisco's annual St Stupid's Day Parade is the ritual crowd wide proclamation of;

Okay, how about redo Iron Fist as a Tibetan millennial who emigrates to Appalachia and learns the ancient arts of moonshinin' and headbutts.

That would be a worthy film.

. . . . A Venn diagram suggests that he or she may actually exist and that the movie could be a documentary.

It is a bit of a Rorschach test.

Oh. It's not one of Einstein's more obscure footnotes?

It’s that or something sexual.

I’m no expert, but I’m fairly sure boobs don’t look like that. On Earth women, at least.

A Greeneville Tennessee newspaper, The Greeneville Sun, has published a local themed overview of the recent bout of Shia LaBeouf's flag waving and resulting occurrences.

Just hours later, the hewillnotdivide.us livestream video, saved and reposted on other sites, showed the project’s flag being lowered. Minutes later, a red hat, believed emblazoned with Trump’s signature “Make America Great Again” slogan, and a T-shirt, reportedly with an image from the Pepe the Frog meme embraced by numerous Trump supporters and proponents of the “alt-right” online, are shown hoisted to the top of the flagpole.

That's a cheer sure to generate a lot of school spirit during football games.

The other team would be so triggered that victory would be assured!

Free Palestine!! . . . with any purchase of Jordan and Syria, get yours while supplies last!!

Blimey, David, I think it may be time to dust off that "giant vaginas" tag once again:

At least that's one thing Miki Agrawal and her staff agree on, then.

At least that’s one thing Miki Agrawal and her staff agree on, then.

Agrawal also touched an employee’s breasts and asked her to expose them, routinely changed clothes in front of employees… She also is said in the filing to have shared nude photos of herself and others — “including but not limited to her fiancé” — with staff. At least once, she supposedly FaceTimed into a meeting from the toilet.

Agrawal… is slated to speak on March 23 at the New Orleans Entrepreneur Week’s Women's Summit, directly following a discussion on “Navigating Sexuality at Work: Finding the Line Between Harmless and Harassment.”

In other women's new...not sure if y'all heard but Brad's wife was fired from Cracker Barrel. On his birthday, no less.
#JusticeForBradsWife

At least that’s one thing Miki Agrawal and her staff agree on, then.

I find it interesting that Agrawal *somehow* became the embodiment of every gross, creepy male boss who ever existed, yet no doubt views her own predatory behavior as patriarchy-busting "empowerment." Because it's different when a woman boss squeezes your boobs.

Having been driven from New York, New Mexico, and an insufficiently undisclosed location in Tennessee, Shia LaBeouf, Nastja Säde Rönkkö, and Luke Turner’s “He Will Not Divide Us” is splitting for England… The anti-Trump art project is putting an ocean between itself, the president, and the Trump supporters who’ve turned hounding LaBeouf’s flag-and-webcam set-up into a weirdly passionate artistic endeavour of their own. “Events have shown that America is simply not safe enough for this artwork to exist,” LaBeouf, Rönkkö, and Turner said in a statement announcing the project’s “adoption” by the U.K.-based Foundation For Art And Creative Technology.

“Events have shown that America is simply not safe enough for this artwork to exist,”

Translated, "I am no longer free of the consequences of my own idiocy and able to act as a provocateur so much as I'd like."

It *is* a bit rich that pranking is being construed as physical menace, while the actual projection of phsyical menace by M. La Beouf himself (assault on counter-"artists", patrolling the flag site in a froth with a bludgeon) goes unmentioned.
< / i>

This is going to be the new “I am Spartacus” thing, isn’t it?

I don't know. It's not tripping my Spidey-sense. (And I am, of course, an internationally recognized expert on these things).

Bad actors (such as LaBoof) are often chosen for their malleability. In his case, an intern ironically misinterpreted this and phrenologized him, so he got his first break.

Heh. Hard not to be impressed.

Hang on, the Foundation for etc is funded by the Arts Council and Liverpool Council. Why is government money going to support a political protest against the US President wearing a thin disguise of an artwork?

Why is government money going to support a political protest against the US President wearing a thin disguise of an artwork?

Because it's only other peoples money. Plus you're a Nazi for even questioning it.

Cordelia Fine... gets a bit of a trashing here.

He does immediately isolate the base conceit, one that informs so much else – the belief that certain things must be disdained, ignored and if possible made unmentionable, especially if they look very likely to be true.

Incidentally, Daphna Joel, on whom Fine leans for credibility, is herself less than credible and is poked at in Janice Fiamengo’s latest video.