Oh, and via Dicentra, a perennial parenting dilemma.

Via Tim Newman and lifted from the comments, a tale of  metropolitan woe: 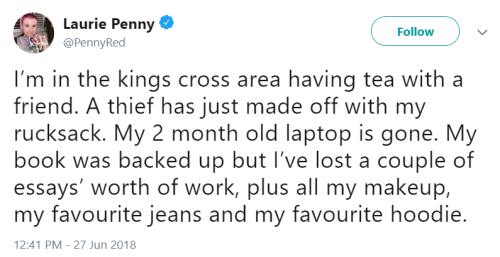 A common enough occurrence, especially in London. But Laurie has assured us, repeatedly and emphatically, that opportunist theft – of trainers, phones, laptops and such - is a sign of “desperation” and “a political statement.” Of which she approves. Are thieves, then, only “dickheads” when they steal from her?

Because It’s Too Bloody Hot

If all else fails, you can always poke through the reheated series and greatest hits.

Apparently, black men are the new white men and should be scorned and silenced accordingly: 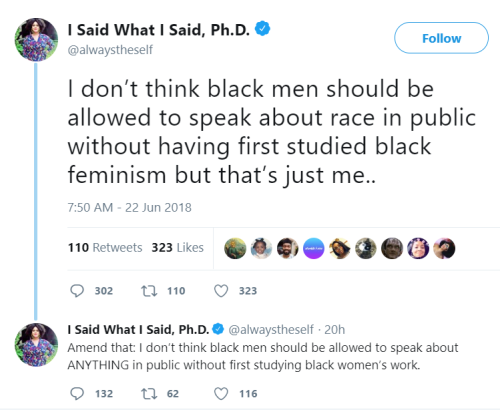 It’s strange just how often this “intersectionality” business looks an awful lot like a caste system, a hierarchy, in which a person’s standing and moral significance, and their ability to take part in discussions, is determined entirely by their race and gender, and other attributes over which they have no meaningful control.

The author of the above, Harvard-educated sociology professor Crystal Fleming, has been noted here before. Via Neontaster.

Tardis take-off caught on camera. || Cat love. (h/t, Damian) || When vortex rings collide. || Levitation. || When lava puts its foot down. || Alice and her pig. || The unexplained dancing plague and other epidemics. || In praise of sweatshops. || An archive of film posters. || On great films that you don’t actually like. Feel free to share your own. || Too many vitamins. || Old Earth. || Modern derp. || Why dogs don’t rule the Earth (yet). || Tulip ballet. || Burger in a can. A taste test ensues. || It’s an ordinary bolt; it’s a tiny hunting knife. || Being woke ain’t easy. || Fight the patriarchy. || The museum of forgotten art supplies. (h/t, Coudal) || And finally, three professional wrestlers in a tug-of-war with a lion cub.

Further to the first item here, on the academic taboo of affirming bourgeois values, Ben Weingarten interviews the woman at the heart of that particular storm, law professor Amy Wax:

Ben Weingarten: There was controversy over your first piece and maybe it’s in part because, while many of your critics would say that every culture is different and who are we to judge which one is superior… they would also say the bourgeois culture that you support is actually inferior and retrograde and regressive — something interesting, I think, in their position.

Amy Wax: Except that they exemplify many of the bourgeois values themselves. And as I point out to them - which only infuriates them more - they try to inculcate those values into their own children. I’m not sure why they do that if they think those values are worthless… They practice what they preach against in many instances.

The whole thing is worth a listen.

Meet the academic left, part 3,047. In which a Cambridge lecturer in “postcolonial studies” complains, publicly and at length, about being addressed by a college porter as “madam,” as is the custom.

And yes, the madam in question, Priyamvada Gopal, has been mentioned here before.

Time, I think, for a visit to the pages of Everyday Feminism, where Ms Ixty Quintanilla is turning her mind to matters ectoplasmic:

I spoke with several individuals who each channel their ancestral spirituality in different ways and asked them how to use spiritual practice as a form of healing and resistance, now during this difficult Trump era and beyond.

You see, when your preferred candidate loses an election, what you really need is some channelling of ancestral spirituality. As opposed to say, a sense of proportion. And so Ms Quintanilla lists some “spiritual practices” in order to enable fellow feminists to cope with the unutterable trauma that is their lives.

Suggestions include Call On Ancestors – which is to say, the dead – and Burn Herbs Mindfully. The latter is surprisingly fraught with complication, as we’re told, emphatically, that we must avoid setting fire to white sage and various endangered plants, and that it is “vital to recognise and respect the ancestors of the land you stand on.” Exactly how one fathoms the particulars of these things, at any given point in history, and how one should respect the relevant no-longer-living parties, assuming one has been able to identify them, is not made clear.

Other recommendations are more prosaic – feeling the breeze, watching trees grow, and, er, pushing up against said trees. No, I don’t know either. But apparently, if your psyche has been exploded and rendered unto dust by the election of someone other than Hillary Clinton, you should immediately find a tree and push up against it. It’s the feminist way.

The same left-wing establishment that in the morning rails against American oppression of an ever-expanding number of victim groups in the afternoon denounces the U.S. for not giving unlimited access to foreign members of those same victim groups. In their open-borders afternoon mode, progressives paint the U.S. as the only source of hope and opportunity for low-skilled, low-social-capital Third Worlders; a place obligated by its immigration history to take in all comers, forever. In their America-as-the-font-of-all-evil-against-females-and-persons-of-colour morning mode, progressives paint the U.S. as the place where hope and opportunity die under a tsunami of misogyny and racism… In pressing for an immigration policy determined by the desire of hundreds of millions of foreigners to enter the U.S., progressives implicitly acknowledge that the left-wing narrative about America is false.

Two professors argue in a newly published anthology on “feminist nutrition” that “athletic performance” and “longevity” are simply “Western values.”

The authors, Allison Hayes-Conroy and her sister, Jessica Hayes-Conroy, are unhappy that dietary literature, which they wish to “decolonise,” rarely devotes space to activist issues such as “strikes and boycotts,” knowledge of which is apparently essential to any attempt to lose weight or correct a vitamin D deficiency. The ladies are also unhappy that farmers markets are “spaces of whiteness” and therefore oppressive.

And via R. Sherman, Bret Weinstein describes his career-changing encounter with the Mao-lings at Evergreen:

Everything is racist. Just confess, for God’s sake.

Oh, and if you don’t instantly believe whatever a brown-skinned person says, anything at all, however improbable - including the demented conspiracy theories of one Dr Dwight Turner - then obviously you’re seething with “unconscious racism.”

Meme history. Do scroll down. || Mapping hell. || Where Canadians live. || On the relativistic addition of velocity. And yes, there will be a test. || Oh dear, bad luck. || Barbed wire telephony. || Today’s word is inadvisable. || Time-lapsing Everest. || Windy valley. || “Roads designed by men are killing women,” says the Guardian. || Small, portable gardens. || Good deed. || “Fantastic Forty.” || First Man. || How to run on all fours. Because apparently it’s a thing now. || Free scarf, small catch. || What’s inside a cat? || “It’s precisely the sort of danger that people who are really looking for trouble would push.” || A niche enthusiasm. || Signage of note. (h/t, Obo) || And finally, informatively, how to bake potatoes.

Because You Deserve No Less

An open thread, that is - our second in 11 years. Feel free to share links of possible interest and then bicker about them.

Our first attempt, a moment of great daring and historic import, included testicle-based snacks, toilet paper shanks, the political flatulence of Patrick Stewart, and whether or not you should clean under the sofa.

If all else fails, you can always poke through the reheated series and greatest hits.