Because Random People Must Be Punished 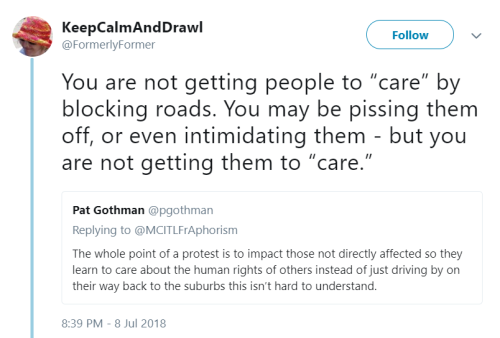 In the comments, Rafi notes that “The difference between leftwing ‘activism’ and the zombie apocalypse gets smaller by the day.” While Randian adds, “If your cause requires bullying to get the message across perhaps it, and your defence of it, isn’t as righteous as you think it is.” Well, indeed. But I suppose it depends on whether you’re amused by making people miss flights and hospital appointments, or job interviews, or thwarting parents’ attempts to collect their children from school. That kind of thing.

And regardless of the pretext offered on any given day, you do have to marvel at the moral vacancy of it all, as illustrated by Mr Gothman in the tweet above. Apparently, it “isn’t hard to understand” that the way to make people sympathetic with your cause, whatever it may be this week, is to screw them over - because you can - and then applaud yourself for doing so. Somewhat harder to understand, at least for Mr Gothman, is that his go-to solution, of which he’s so proud – i.e., the gratuitous trapping of motorists - is a moral non sequitur and rather like saying, “I’m troubled by the plight of the Javan rhinoceros, so I’m going to start spitting at the elderly and keying random cars, and then boast about it.”

The Obstructing-Traffic-And-Frustrating-Random-People-While-Feeling-Immensely-Self-Satisfied Thing™ first came to my attention during the Occupy fad-cum-gap-year, and it rapidly degenerated into opportunist thuggery and self-indulgent farce. A high point being when a Mao-ling mother placed her four-year-old daughter on active train tracks.

Since then, in the name of “teaching others to care,” we’ve seen self-righteous mobs deliberately blocking the paths of ambulances and giving paramedics the finger, while exulting in their power to alarm, frustrate and coerce. And to endanger lives with collective impunity. And we’ve seen fearless, selfless anti-Trump protestors surrounding and terrorising a lone female driver by trying to smash her car’s windscreen into her face, and videoing her distress for their own amusement and peer-group cred.

And at which point, what you’re seeing isn’t politics or protest. It’s sociopathy.

We’ve also seen Mao-lings at UC San Diego running into traffic - on a motorway, in the middle of the night. Because terrorising random motorists is the woke thing to do, apparently. And then, when one of them got hurt - which will tend to happen if you swarm onto a motorway in the dark – the Mao-lings immediately started blaming someone else – anyone but the people who actually chose to run into the path of oncoming traffic. And of course we’ve seen things like these items here and many others in the archives. All done in the name of forcing others to be compassionate. And comply.

Via Dicentra, following this.

Because Random People Must Be Punished