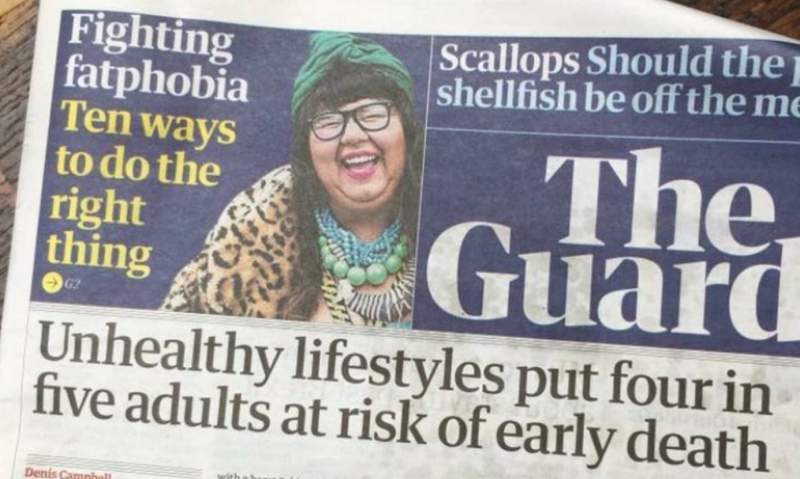 And so, on one page we’re reminded of some unhappy realities:

Prof Jamie Waterall, Public Health England’s national lead for cardiovascular disease, said: “It’s worrying that so many people are at risk of dying unnecessarily from heart attack and stroke. [But] I was unsurprised … given that we have a population that’s becoming more obese and we have major problems with things like high blood pressure, high cholesterol, alcohol and physical inactivity.” […] 80% of heart attacks and strokes are preventable, he stressed.

However, elsewhere in the Guardian, we’re informed - by “an 18-stone woman who refuses to diet,” a self-styled “feminist killjoy” - of much more pressing matters. Specifically, that obesity tends to limit one’s access to a flattering wardrobe, which is a form of oppression; that taking selfies from above, to minimise double chins, is a form of “fatphobia” and therefore oppression; and that restaurants often fail to provide widened, armless, reinforced chairs in order to accommodate their more girthful customers. Which is, obviously, a form of oppression. The oversized author, Virgie Tovar, helpfully instructs the non-obese in how to change their wicked ways.

Presumably, then, we must avoid becoming heavily overweight while acting as though we’re doing it for no reason whatsoever.

I don’t generally care about how big someone is and I manage to get through the day without making gratuitous remarks about other people’s size. But I have noticed a recurring dynamic, whereby someone will get fat and obviously be unhappy about it, while being intensely reactive to even the most cautious acknowledgement of either their size or its effect on their mood and health. And this defensiveness can lead to all kinds of mental contortion and some quite bizarre behaviour. Not least among self-styled “fat activists.”

And so we see endless articles in which activists bemoan their unhappy lot and the seemingly life-ruining difficulties of being obese, while the most practical solution, the one over which they might exert some leverage – losing weight - is either not mentioned at all - as, for instance, here - or is disdained as both a personal affront and a betrayal of The Cause, i.e., of whatever martyrdom drama the activists in question imagine themselves engaged in. As one unhappy lady put it, “Intentional weight loss goes against everything that I stand for.”

And so rather than changing the situation, they choose instead to shout at the rain. And complain about people who take selfies from above so as to avoid double chins. Because the drama must go on.