A student group at a California university is hosting a month-long “Body Love” celebration, which includes events about how “menstruation and environmentalism go hand in hand.”

Not, I think, an entirely happy image. But apparently, students will be “empowered” and “feel more comfort” by exploring the “intersection” – because you knew there was going to be an intersection somewhere – of “body love and Earth love.”

Students could also attend a “Self-Care for Body Hair” event that offered answers to questions such as: “What do you do with your body hair? Does your relationship with your body change when you’ve shaved recently? Do you shave at all?”

Because when you call yourselves The Student Assembly for Gender Empowerment at the University of Southern California, and proudly declare a mission to fight for those “oppressed by the patriarchy,” while “working towards intersectional, collective liberation,” then obviously you’re going to focus on the big, meaty issues of the day. And so,

At the group’s “signature event,” a “body love fair,” students were treated to “crafts, donuts, boba, music, and self-lovin’ vibes!” At that event, attendees were also invited to “release your anger at our Scale Smashing!”

Yes, students with weight issues – issues of such magnitude that they have anger to release - will be encouraged to gorge on doughnuts and thick sugary drinks containing various types of pudding and requiring an extra-wide straw, before hating themselves all over again, while pretending to be empowered and totally okay with it. You see, the way to help overweight people is to encourage the kind of high-sugar consumption that results in weight gain, and inviting them to smash objects that remind them of how unhappy they are about being fat. A situation that they’ve just made slightly worse.

As the holiday of frights and horrors is nigh upon us, it seems an apt time to remind patrons that this rickety barge is kept afloat by the kindness of strangers. If you’d like to help it remain buoyant a while longer, and remain ad-free, there’s an orange button below with which to monetise any love. Debit and credit cards are accepted. For those wishing to express their love regularly, there’s a monthly subscription option top left. And if one-click haste is called for, my PalPay.Me page can be found here. Additionally, any Amazon UK shopping done via this link or the search widget top right, or for Amazon US via this link, or for Amazon Canada via this link, results in a small fee for your host at no extra cost to you.

For newcomers wishing to know more about what’s been going on here for the last decade or so, in over 2,500 posts and close to 90,000 comments, the reheated series is a pretty good place to start - in particular, the end-of-year summaries. If you can, do take a moment to poke through the discussion threads too. The posts are intended as starting points, not full stops, and the comments are where much of the good stuff is waiting to be found. And do please join in.

Again, thanks for the support, the comments, and the company. 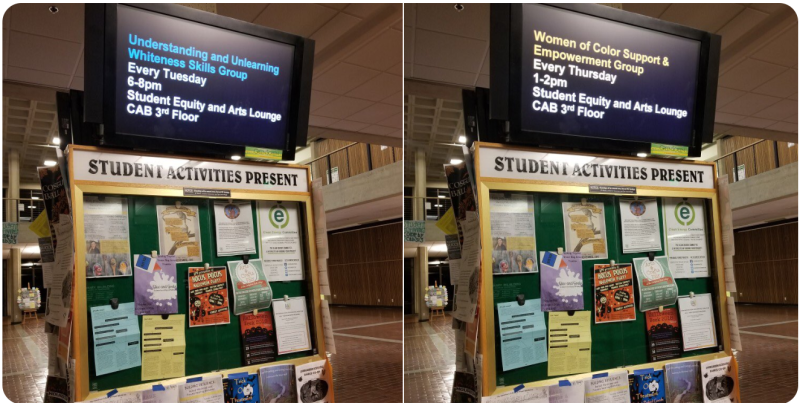 The college in question has of course been mentioned here before.

Men, listen up… Join me, with due diligence and civic duty, and publicly claim: I am sexist!

In the pages of the New York Times, a philosophy professor named George Yancy is gushing his little heart out:

It is hard to admit we are sexist. I, for instance, would like to think that I possess genuine feminist bona fides, but who am I kidding? I am a failed and broken feminist.

Upon which revelation, I suppose we could all just stop and go home. But no, let’s press on.

More pointedly, I am sexist. There are times when I fear for the loss of my own entitlement as a male. Toxic masculinity takes many forms. All forms continue to hurt and to violate women.

The word toxic, by the way, is deployed no fewer than nine times, excluding various synonyms, as if it were an incantation. Now brace yourselves for some full-on testosterone-jacked beastliness.

For example, before I got married, I insisted that my wife take my last name… While this was not sexual assault, my insistence was a violation of her independence.

To reiterate. Asking a fiancée if she’ll change her surname upon marriage, as is still the custom, perhaps to avoid confusing people as to whether you’re actually married or not, and possibly to avoid imposing on any children lengthy hyphenated surnames… this is not sexual assault. I’m glad we’ve cleared that up.

This is probably now the top hot-button issue at Canadian universities - the move to replace ‘European-based knowledge’ as exclusionary, inadequate and subjective, and to replace it in some cases with “indigenous knowledge,” and even something called “indigenous science”… what some might say is superstition or magical beliefs… The idea that “indigenous knowledge” is not to be questioned, that it has value equal to supposedly ‘European’ science… is an incredibly worrisome and strange idea.

Do watch in full for the anecdotes about the realities of so-called “affirmative action,” and the faculty lounge response to hearing of the 9/11 atrocities. If you’re new here and unfamiliar with Professor Fiamengo’s observations on campus culture, I recommend watching this.

Somewhat related, scenes from Cape Town’s decolonised academia, where “science people” are scolded for “disrespecting progressive space” – specifically, for doubting the claim that Africans can throw lightning at their enemies.

A Harvard University dean testified that the school has different SAT score standards for prospective students based on factors such as race and sex — but insisted that the practice isn’t discriminatory… [Dean of admissions, William Fitzsimmons] said Harvard sends recruitment letters to African-American, Native American and Hispanic high schoolers with mid-range SAT scores, around 1100 on math and verbal combined out of a possible 1600… Asian-Americans only receive a recruitment letter if they score at least 250 points higher — 1350 for women, and 1380 for men.

The words that come to mind are systemic and institutional. See also this and this.

Lifted from the comments, an unhappy Twitter exchange. As it’s couched in the contortions of “social justice,” and therefore not entirely honest, or indeed remotely honest, I’ll attempt to paraphrase:

“I’m a student of critical race theory and I’ve decided to get preposterously upset because you favourably quoted one of my super-woke boilerplate tweets. You should now pay me for my insufferable narcissism, on account of my Designated Victim Group status.”

“We’re sorry for quoting one of your tweets, which was obviously a traumatic violation of your Designated Victim Group status. However, the employee who quoted you is black, queer and non-binary, and therefore also a Designated Victim. So, although we’ll pretend to be sorry - because we all have to pretend, otherwise the whole racket will collapse - you really shouldn’t be applying our insane standards to us.”

Today’s word is rethink. || Always respect the media. || Piano improvisation made simple. || Build your own mobile phone. || “No bathroom inside, but many nearby.” || She does this better than you do. || Self-lubricating condoms. || For me, yes, but not thee. || One whole minute of performance art. || Don’t all rush at once. || Chart of note. (h/t, Damian) || How Jack Became Black. || Ladies, in states of undress, with skeletons. || On watching Alien for the first time. || Ladder-climbing snake robot. || Drone versus aircraft wing. (h/t, Tony) || Today’s other word is character. || Naked man fights cop car. || Rat infestation. || Achievement redefined. || Analogy of note. || It’s hard to know where to start.

I Question The Location Of The Toilet Roll Holder

“I’ve lost every set of keys I’ve ever owned,” she admits.

Before you say it, yes, I know. I’m veering towards the catty. But the fact that it even exists possibly tells us something:

Laurie—who’s currently in a good place with her mental health and says she’s lucky to have found treatments that work long term—isn’t claiming that everything will be great if you could only just rearrange your house in a particular way. But she knows from experience there are alternative therapies and ideas that can help, in addition to traditional treatments. Including, but definitely not limited to, arranging your house in a certain way.

Laurie has heard that raw wooden surfaces and the presence of wood in the home can lift one’s mood, so she’s made sure to include wooden decor elements, from furniture to twigs, branches, and a dead tree she found on the side of the road she thought looked nice.

Posted at 08:06 in Anthropology, Politics, The Deep Wisdom of Celebrities | Permalink | Comments (102)

As a change of pace, a non-political palate cleanser, here’s a second selection of the games scattered throughout the Friday Ephemera posts, with a couple of new additions that may entertain:

The anonymous sociologist’s claim that empirical facts are irrelevant… raises an important question: if theories in the social sciences are not constrained by empirical facts, what are they constrained by? The answer seems to be that theories in Race and Ethnic Studies sociology are mainly constrained by the political opinions prevailing in that branch of the field… [‘Race theorist’] Eduardo Bonilla-Silva scorns the very idea [of truth], speaking of the “devil of ‘objectivity’” (note the scare quotes). Without the possibility of objectivity, there is no science. Has sociology become, then, just political activism? To some extent, yes. According to Tukufu Zuberi and Bonilla-Silva: “The aim is to attain epistemic liberation from White logic.”

Professor Bonilla-Silva and his nasty, paranoid contortions have been mentioned here before. When not denouncing objectivity and “white logic” - or complaining that his employer, Duke University, “oozes whiteness,” which is, it goes without saying, a terrible thing to ooze - the professor equates critics of affirmative action with 19th century supporters of slavery. He also claims that non-racial ‘colour-blind’ attitudes and policies are merely a “way of calling minorities niggers, Spics or Chinks.”

One of the more bizarre indicators of Bonilla-Silva’s mental state is his written insistence - published in a course syllabus - that students must control their “body language” and avoid any “irresponsible contestation” of his arguments. Black students who disagreed with the professor’s lurid racialist theories have been denounced by him as “Uncle Toms.” Oh, and Professor Bonilla-Silva, a grown man, a tenured academic with a six-figure salary, refers to the United States, in class, as “Gringoland” and “AmeriKKKa.”

‘Critical race theory’ is a mess, for example. It’s an explicitly political situation, in which ‘whiteness’ has to be bad and therefore can’t do anything right, and they take these ideas and launder them through the academic process. And these departments exist specifically to launder these ideas, to put them through the academic process and give them the appearance of being rigorous studies, so then activists can go and say, “Oh, a study has shown…”

For more on so-called “critical race theory,” see also this.

Question, answered. || The future is now. || You want one and you know it. || “I have a lot of moths.” || Miss Correct Posture Contest, 1956. || A present for the mistress. || Miniature replicas of lonely deaths. || Playing with gusto. || “This is a solar-powered website, which means it sometimes goes offline.” || Assorted control panels. (h/t, Things) || Just a little obsessive. || She’s an educator, you see. || She’s a journalism major. || Woke, woker, wokest. || Political correctness as status signal. || Scenes. (h/t, Damian) || Assorted loops. || Chasing Lights in the Himalayas. || Heh. || Nuking Hurricanes: the history of a really bad idea. || And finally, if you laugh at this you’re a terrible, terrible person.