During my final semester in college, I intentionally took a course focused on race, gender, and the history of oppression in the United States… The most jarring realisation: liberal academics define “oppression” so loosely that their victimhood narrative can never end… Each criterion is defined loosely enough to lend themselves to a kind of subjective self-victimisation. This is convincing a generation of young people that their life trajectories are beyond their control.

As noted here previously, woke piety is a kind of positional good, jealously defended and forever in peril. It’s a competitive gig and so the goal-posts have to move, generally by veering further into absurdity. And so we end up with agonised Guardian articles about being oppressed by free cake, and the menace posed by heteronormative pastries and spellcheck software, and about how men discussing barbecues is not only “oppressively penetrating,” but about as “oppressively penetrating” as a thing can be. And students with the moral wherewithal to resist this narrative may find themselves being denounced by their so-called educators.

For history’s rare multiracial and multi-ethnic republics, an e pluribus unum cohesion is essential. Each particular tribe must owe greater allegiance to the commonwealth than to those who superficially look or worship alike. Yet over the last 20 years we have deprecated “unity” and championed “diversity.” Americans are being urged by popular culture, universities, schools and government to emphasise their innate differences rather than their common similarities… Some hyphenate or add accents or foreign pronunciations to their names. Others fabricate phony ethnic pedigrees in hopes of gaining an edge in job-seeking or admissions. The common theme is to be anything other than just normal Americans for whom race, gender and ethnicity are incidental rather than essential to their character.

And again, and not entirely unrelated, on illegal immigration:

The avenue where I have lived for 65 years in terms of the fundamental metrics of civilisation—sanitation, single-family zoning, building codes, mosquito abatement, dog licensing and registration, and sanctions for illicit activity—has regressed a half-century or more. Officials apparently assume that visiting these places can become a lose-lose-lose situation: the miscreant will not comply with citations, the bureaucratic costs of enforcement are not offset by collectable fines, and the touchy subject of illegal immigration may earn either unfavourable press coverage or censure from politically sensitive county and local officials. In other words, we are a world away from Nancy Pelosi’s gated Napa estate, or Dianne Feinstein’s $40 million hilltop Pacific Heights mansion but not from the results of their ideology.

As usual, feel free to share your own links and snippets, on any subject, in the comments.

We're repeatedly told that strife exists in Africa and the Middle East because European powers drew borders on the map to create new countries without regard to existing tribal boundaries. The same people also tell us that ethnic and religious diversity is wonderful. It's almost as if they have an agenda other than the well being of Europe and America.

If the multi-ethnic and multi-cultural state is so obviously beneficial, why does it never arise naturally? Look at the breakup of Yugoslavia or post-invasion Iraq to see the "benefits" of diversity in the modern era. Both could only exist in relative peace with a strongly authoritarian government.

Let us never forget it includes "gender" diversity except that Men ‘don’t deserve opinions,’ tweeted new director of gender relations at Notre Dame, a "...department [that] “works to foster a healthy environment of communication and dialogue between individuals of different genders on campus,”

How is this in any way a "jarring" realization?

I was stabbed and blinded in one eye, and I've been shot twice. While I'm not as stoic about it as I'd like to be, I have to admit that I'm much better off than my parents were at my age, especially my father during the Nazi occupation.

And yet I cannot count the number of liberal academics who trivialize that in comparison to things like "misgendering".

If you're so hypersensitive that you seriously equate mass murder and physical torture with being called a pronoun you don't like, you're so delusional as to be not even worth talking to, never mind listening to.

it includes “gender” diversity except that men ‘don’t deserve opinions,’

Again, you have to marvel at how every third utterance seems to be a lie. Though I did like this one:

In her defense, Jarrett stated “I’m not here to teach or promote my own agenda.”

in her recent email to members of the Gender Relations department, Jarrett laid out the agenda.

Because what the world needs right now is more “pronoun emphasis.”

“a healthy environment of communication and dialogue between individuals of different genders on campus,”

How quickly they learn to mouth this stuff.

It’s one the more pernicious things about “diversity” ideology – it encourages students to become preoccupied with what should be among the least interesting aspects of who they are, and to exaggerate those aspects and become cartoonish. Not so much individuals as mascots for causes. And again, if you think that your brownness or gayness or whatever is the most important feature of your personality, its defining attribute, then there’s probably something wrong with your personality.

And not just a little wrong.

In other words, we are a world away from Nancy Pelosi’s gated Napa estate, or Dianne Feinstein’s $40 million hilltop Pacific Heights mansion but not from the results of their ideology.

Meanwhile, at a multi-million dollar beach home in Venice, California

In other words, we are a world away from Nancy Pelosi’s gated Napa estate, or Dianne Feinstein’s $40 million hilltop Pacific Heights mansion but not from the results of their ideology.

By the way, I think calling the hysteria that leads to erasure of people like Kate Smith, and now R Crumb, Cancel Culture is spot on.

Having just started high school while Crumb's underground comix were creating quite the stir, I remember some of my friends getting their hands on copies of stuff like Fritz the Cat. Read a few and wasn't personally impressed. I didn't (and still don't) care for his drawing style.

But even as a teen, all that meant to me was that I just not read them. It never occurred to me to bully, shame, or denounce my friends for reading them.

Meanwhile, at a multi-million dollar beach home in Venice, California 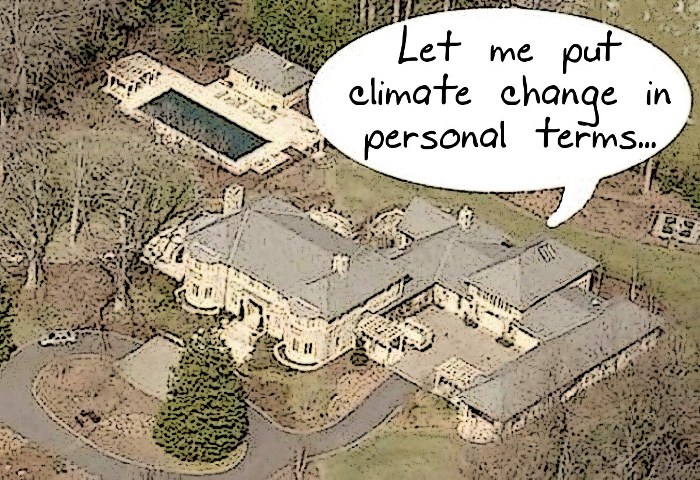 It never occurred to me to bully, shame, or denounce my friends for reading them.

That is because you are not Woke.

Liberal tolerance, as exemplified by the First Amendment—refusing to violently punish someone for his or her expression—offers a way for these battles to take place without anyone being physically hurt.

I see the author hasn't been paying attention to the antics of self professed "liberals" lately.

A Guardian writer goes to the cinema:

Here I am, the morning after seeing Avengers: Endgame, and I am still shocked, angry and hurt. I am an avid Marvel nerd and while the movie itself was brilliant in many ways, I had seriously conflicted emotions about the physical appearance of Thor… Thor is 30kg heavier and it seems as though everyone in the audience is laughing except me… While I fully support people going to see Avengers: Endgame, I feel it’s necessary to make a trigger warning: strong themes of fat shaming…

She fully supports other people seeing films they want to see.

I was stabbed and blinded in one eye, and I've been shot twice.


There is nothing special about any racially distinct physical body per se. Black skin does not convey nobility. Neither does white skin, or yellow skin. Your body is not special until it conjoins itself to a mind and adapts nature to its needs and desires and rational aspirations, its self-actualization and manifested agency. Any human body that fails to achieve a self-cultivated moral character and inscrutable human will is merely an ecological social ballast: ignoble, exploitable, a heap of unintelligible flesh on this earth.

Another addition to the unperson gulag.

Everyone who didn't predict this may leave the room, "Male weightlifter Mary Gregory sets records in women's weightlifting."

A female Olympian responded by condemning the "pointless, unfair playing field" where biological women are beaten by biological men who identify as transgender women.

Well, she's not going to be invited to any Microsoft parties any time soon!

The truth of the matter: some people should be oppressed, i.e., not permitted to do whatever they feel like doing.

I am still shocked, angry and hurt.

Are the Russians, or whoever’s the enemy du jour, dumping something in the water? Craziness increases exponentially.

Another addition to the unperson gulag.

Allied leaders were anti-Nazi, but not anti-racist. We’re now paying the price for their failure.

...this historian imagines where we might be today had the Allies fought on the basis of eliminating the racial supremacy of the Germans.

I imagine still fighting if not already part of the Third Reich for failing to fight the damn war.

In my World War II class recently, I had my students...

...who should demand a refund.

No, although I do know the missing dog cartoon you're referring to. But my friends aren't really ironic, or hip in any way. Most are engineers, mathematicians, bankers, military, or similarly un-woke types.

It looks as if he already has.

...this historian imagines where we might be today had the Allies fought on the basis of eliminating the racial supremacy of the Germans.

Fascinating...the historian substitutes his imagination for teaching the subject matter. I wonder, will the final exam test students' knowledge of history, or the historian's imagination...

Incidentally, I'd have thought the record of the German people since 1945 demonstrates a lack of a belief in racial supremacy. But what do I know, I'm not a "historian."

Woman screams at a man wearing a red hat, and with no self-awareness calls him hateful:

(The ratios on those tweets are beautiful)

It looks as if he already has.

Not that fantasy writing is outside the realm of what many in his profession regularly do.

Natalie Weiner has protected her tweets (there’s an unlikely sentence for you!). What was the ratio?

Are you a white supremacist ? See this simple checklist to find out.

See this simple checklist to find out.

I invite the lecturer to drive over a bridge, only partially completed after 15 years, by barely literate people who subjectively don't believe there is any one right way to build a bridge.

How can “perfectionism” and “quantity over quality” be on the same list?

Are you a white supremacist? See this simple checklist to find out.

I think that one deserves a post of its own.

Natalie Weiner has protected her tweets (there’s an unlikely sentence for you!). What was the ratio?

How can “perfectionism” and “quantity over quality” be on the same list?

A foolish adherence to logical consistency is also a sign of White Supremacism and CisSexism. To the re-groover!