Climate change activists chained themselves to the wrong building in the City of London after failing to realise the fossil fuel company they wanted to disrupt had moved address last year.

And yes, there is a punchline:

The group of 200 protesters instead brought chaos to the entrance of a building which houses the offices of a leading renewable energy company.

The protestors’ chanted demands include “No borders, no nations, no gas power stations.”

Readers are invited to marvel at the patchwork of seemingly incompatible concerns, and to ponder how, if at all, any of the protestors’ professed objectives could actually be met without nations, with borders, to implement them. Do they imagine that some borderless, undifferentiated and continually shifting mass of human beings with no common identity or common bond could function at all for any length of time, let alone in ways that they, or we, might find congenial?

If broadcasters still cared about the editorial independence of their employees, then comments like this [aired on Twitter] would not be made by their journalists. For they further reveal what most of the public have come to suspect – that broadcasters presenting themselves as non-partisan in fact hold very clear political views and that these usually veer in a particular direction… Of course, people have always harboured their suspicions, but not until journalists began to freely give away their thoughts on social media was such a smorgasbord of evidence presented…

On one single occasion in recent years has a television presenter let slip a view that did not fall into lockstep with the narrow orthodoxies of the broadcasting class. When Politics Live presenter Andrew Neil sent out one tweet last year mocking the increasingly conspiratorial Observer writer Carole Cadwalladr, he not only deleted the tweet but himself immediately became a news story. There were swift calls for his sacking, and the BBC felt compelled to publicly chastise Neil. As it happens, despite being almost uncontested as the country’s leading political interviewer, Neil no longer has a regular slot on the BBC.

Bob McManus on the hustles and dishonesties of state education:

At the Waltham Forest Pride March - “a celebration of diversity” in “one of London’s most diverse boroughs,” and where “London’s first rainbow bus shelter” is doubtless an object of pilgrimage - a multicultural dilemma is caught on camera.

They arrive flat-pack. (h/t, Julia) || In-flight escalation of note. || An unexpected noise. (h/t, Damian) || Welcome to the world of nappy status notifications. || Today’s word is inadvisable. || China’s vertical dramas. || A collection of tiny vases. || Modern headline. || I think this is called ‘going out of your way to be angry’. (h/t, Darleen) || ‘Free’ explained in chart form. (h/t, Dicentra) || It’s a zoetrope, it’s a chocolate cake. || Willy Wonka goes ska. || Airport scenes. || Today’s other words are progressive law enforcement. (h/t, Jeff) || Our betters lead complicated lives. || One for the ladies. || She has furry friends. || It, er, comes with a remote. (h/t, Captain Nemo) || And finally, a reminder that parking is hard.

I Can Feel The Art Improving Me

As an enriching cultural bonus, here are some Estonian art gallery scenes, in which a full-figured feminist protests against the “violence” of the art on offer – while naked, obviously - during a visit by schoolchildren. The artist being denounced is Marko Mäetamm, whose offerings to the world are numerous and can be savoured here. The feminist lady taking umbrage, Mare Tralla, also makes bad art.

The boy in the hat, fourth from the right, rather captures the moment, I think.

What is masculinity? How can we challenge it?

So ask the great minds behind Earth First! UK, a “non-hierarchical organisation” that will soon be hosting a six-day series of eco-activist workshops at an undisclosed rural location in the North East of England and which employs unspecified “direct action” in order to “stop the destruction of the Earth.” It all sounds very Flash Gordon - except, I suppose, for the challenging masculinity thing. Curiously, a definition of masculinity seems to have proved elusive and no indication is given of exactly why masculinity should be challenged. It just should, apparently. They’re quite emphatic on this point. Which sounds a little like jumping the gun, but there we are.

As if to heighten the intrigue, the official tweet, linked above, links in turn to the official Earth First! UK website, which also has no information whatsoever about why challenging masculinity is a thing one ought to be doing, and doing urgently, or how one might go about this pressing task in a suitably planet-saving manner. In fact, the workshop in which these high-minded rumblings will apparently occur, thereby averting catastrophe, isn’t mentioned at all. Conceivably, the aforementioned “non-hierarchical organisation” may be a factor here.

Those untroubled by such mysteries and who wish to save the world from rampant masculinity, possibly by chaining themselves to something, are advised to bring “a tent, a sleeping bag and a torch.” Rest assured that meals will be “made vegan and collectively,” which sounds promising. And do bear in mind that “everyone is crew,” another gloriously collective sentiment, and consequently, “toilets and running water will be run by all of us.” The words foolproof and hygienic leap immediately to mind.

Via Julia, who is no doubt already airing her sleeping bag.

She Doesn’t Do Toilets

More feminist fun times in the pages of the Guardian, where Nicola Heath is bemoaning her womanly lot:

It feels very personal, the fight you have with your partner about who does the laundry or cleans the bathroom. But the second-wave feminists were right. The personal is political.

The unequal division of labour at home is a systemic issue that needs structural social change to solve it.

In this instance, the claim of inequality and the case for “structural social change” are not entirely compelling:

Like many heterosexual couples, it was the arrival of children that set my husband and me on divergent paths at home. I’ve been an avowed (and untidy) feminist since I was old enough to say the word. We were together for 10 years before the birth of our daughter – he knew his co-parent had zero aspirations to be a homemaker… Becoming a parent is… a huge transition. Your identity is reforged in the crucible of sleep deprivation and newfound responsibility. The pre-kid lifestyle of Friday night drinks, free time and sleeping in becomes a distant memory.

Yes, in a shocking and unguessable turn of events, becoming a parent is usually a life-changing experience, a major development that entails compromise and sacrifice. A shifting of priorities. If only all of the other parents on the planet throughout human history had an inkling, some clue. Our Guardian writer is of course determined to frame the subsequent division of labour in the Heath household as a result of dark forces – including “social conditioning,” “prescribed gender roles” and the oft-invoked “gender pay gap.” An allegedly oppressive phenomenon that doesn’t actually exist. And then, inevitably, a whiff of self-pity:

When you have someone to take care of menial stuff such as running your life, there’s little incentive to change the status quo. It’s nice having someone wash your clothes and cook your food. When you don’t have to expend mental energy keeping track of grocery lists and family birthdays, you have the cognitive bandwidth to think about other things.

Continue reading "She Doesn’t Do Toilets" »

You should chew your food until it is small enough to swallow easily,

The Guardian, paper of the enlightened, tells its readers how to chew food.

In the comments, via Darleen, behold the bedlamite dance. 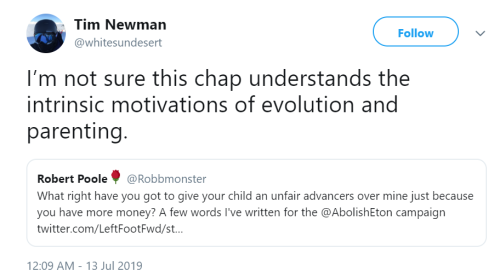 Put another way, “State education is generally sub-optimal and often shockingly bad. Let’s make sure that’s all there is available.”

We’ve been here before, of course. As when we heard the claim, conveniently unchallenged, that doing one’s best for one’s own children - in contravention of “social justice” - is merely a “cultural construction,” and therefore, presumably, ripe for deconstruction. By our betters.

And we’ve been here more than once.

Minor malfunction detected. || An appetising dessert. || Just the usual family drama. || An alarming example of upside-down peas. (h/t, Damian) || How to sound like Erik Satie, or alternatively, like Bach. || The sounds of American doomsday cults. (h/t, Things) || It undulates. || Theodore Dalrymple on modern dishonesties. || The car of tomorrow. || Firecrackers of yore. (h/t, Coudal) || South African scenes. || Horse sense. (h/t, Darleen) || High anxiety. || I think something is rattling. || Attention, retailers: How to sell the Sony Betamax. || Stromboli goes boom. || There and back again. || God one, boat nil. (h/t, Rita) || Eleven elements. || And finally, via Elephants Gerald, a balance of terror.

Her Breasts Were Unusually Animated

I think it may be time for an open thread, in which to share links and bicker.