The words “overly judge” seem to be doing quite a bit of heavy lifting.

Added via the comments, another young lady sending signals. None of which we must register.

Rod Dreher on Bad Whitey, Corrupter Of All Things:

In New Jersey, two high school boys stand accused of racially harassing and intimidating four younger black girls. The accused are of South Asian (Indian) descent. You might think that this ugly display is a reminder that the sin of racism is a universal part of the fallen human condition. You would be wrong, according to Princeton historian Nell Irvin Painter. Writing in the New York Times, the L’Osservatore Romano of the Cult of Social Justice, Painter tells us that it’s really whitey’s fault… Even when racist harassers are brown-skinned, they’re really white, and their alleged actions are the fault of white people… I remind you that this racist screed was written by a Princeton professor, writing on the op-ed page of the most important newspaper in the world.

You see, when members of one racial minority assault and degrade members of another racial minority, they are, we’re told, merely “enacting American whiteness,” something seemingly akin to demonic possession. This, and only this, is apparently “what matters.” Such, then, are the standards of Princeton employees.

And Steve Salerno on woke education - and mediocrity for all:

It should be apparent that implementing [‘Social-Emotional Learning Theory’] necessarily presupposes some dilution of the traditional nuts-and-bolts curriculum — the diversion of finite class time to topics and methodologies that have nothing to do with mastering, say, long division. The gurus of SEL make no apologies for this. Rather, as [New York mayor, Bill] de Blasio insists in his Fortune piece, “These are hard skills... just like reading and math, that must be taught, practised, and strengthened over time.” SEL’s unflinching emphasis on the so-called “non-cognitive factors” in cognition is bad news for all supporters of no-nonsense education — that is, the kind that doesn’t encourage students to devote class time to communicating their current emotional status to their peers via emojis, as has happened in some SEL implementations.

Because the way to encourage mastery of a subject is to do away with red-pen corrections, which are “stigmatising,” and to embrace “individual” spelling - as opposed to the stuffy and outdated kind, with its rules and whatnot, and thus the possibility of being wrong. Presumably, on grounds that being precise, articulate and in possession of one’s thoughts – or just knowing the difference between ask and axe - is terribly racist.

Don’t Oppress My People With Your Comprehensible Sentences

“How to assess writing without judging its quality.”

Or, Call It A Counter-Protest.

Lifted from the comments and further to recent rumblings, a safe space is violated.

“What is wrong with you?” they ask.

We’re going to see a lot more of this. Good.

It seems to me that these ladies actually got off lightly. If you choose to block the roads, determined to needlessly frustrate hundreds, even thousands, of people, just so you can indulge in some in-group preening, while ordering drivers to walk, then you should expect some physical push-back from the people on whose freedoms and imperatives you’ve chosen to piss. Because, hey, sabotaging attempts to get to jobs, airports and doctor’s appointments, while impeding emergency vehicles and thereby endangering lives, is such a lark, baby.

Acts of planned and gratuitous aggression, including narcissistic aggression – which is what these ‘protests’ are - should be treated accordingly. It’s important that these cossetted pinheads, so gorged on their own sense of entitlement, learn to fear those on whom they recreationally impose themselves. Their expectations of impunity should be shattered. Along with the conceit that the way to make people sympathetic with your cause, whatever it may be this week, is to screw them over - because you can - while applauding yourself for doing so.

Despite the pretence of martyrdom and claims by the participants that they “do not enjoy” exerting power over random passers-by - or would-be passers-by - it seems quite obvious that personal gratification is by no means incidental. These disruptions and obstructions – forcibly immobilising large numbers of people - are very much recreational, a rush of ego, as bullying often is. Now imagine being so privileged, so removed from normal concerns, that being arrested is a form of recreation, a leisure activity, a way to impress your peer group and accrue status.

If your go-to solution, your preferred mode of expression, is to frustrate and harass random people who are just trying to get to work, or to get home – and you do this while feeling enormously self-satisfied about your own imagined radicalism – then this tells us very little about the world or any purported cause. It does, however, tell us quite a bit about what kind of tosser you are.

Two items lifted from the comments:

When the public have to do what the police apparently won’t.

Imagine being so self-absorbed and self-flattering, so untroubled by normal boundaries, that you don’t anticipate how your own disruptive behaviour will tend to be viewed by the wider public - the people on whom your behaviour is being inflicted. A wider public that for the most part can’t afford to spend days on end indulging in Student Union theatrics.

In the comments over at Samizdata, Mike Solent adds,

This is an interesting example of public order being served by the absence of the police rather than its presence.

You Can’t Fault The Adhesive

When you combine an impromptu windy boat ride with fake eyelashes.

How Dare You Defend Yourselves

In the comments, WTP steers us to this crime news item, in which a 23-year-old man, described as “known to police,” attempted a spot of armed robbery at a Dollar General store before being shot and killed by a store employee. Being schooled in modern manners, the family of said man are terribly indignant:

They’re furious about how it happened.

Yes, well. I suspect the staff and customers being menaced at gunpoint weren’t too thrilled to find themselves being preyed upon, for the fourth time this year, by armed criminal vermin. Though I suppose it’s easier on the ego if you can pretend that the problem is that people may defend themselves when your degenerate brother, with a history of involvement in criminal activity, threatens their lives while trying to rob them.

If only these creatures were capable of shame.

Frankly, I question his conviction. || Nommy-nommy-nom. || For all your online autopsy needs. || Ah yes, the clever ones. || London scenes. || More joys of public transport. || Apparently, Dungeon Synth is a genre. (h/t, Things) || They’re gaining on us. || Global bling. || Blackboards of note. || Burly chap. || His cakes are better camouflaged than yours. || Because you would and you know it. (h/t, Dicentra) || On photographing the Milky Way. || That’s exactly how I would’ve done it. || Will an iron anvil float in mercury? || 10 minutes of moral squalor. Not for the faint-hearted or easily depressed. || Augmentation of note. || How to steam eggs. || Fussy customer. || And finally, ten billion tons and moving fast.

See How Complicated She Is

Because retroactive lesbianism is apparently a thing: 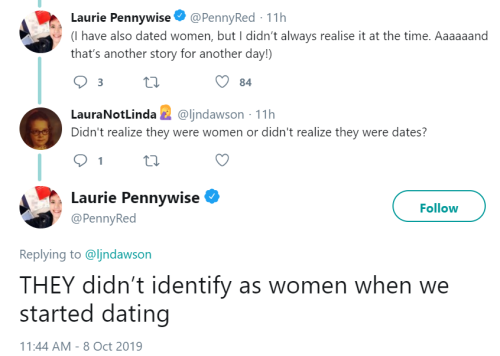 Readers are invited to share their own dating dramas, from minor complications to outright catastrophes, in the comments.

May Contain Traces Of Irony

“Your future’s gone. How old are you?”