Yes, a chance to be thrillingly creative and throw together your own pile of links and oddities in the comments. I’ll set the ball rolling with a small hole in the ground; some silent props for when your pool balls are too loud; via Julia, an illustration of stereotype accuracy; a realisation of note; a reminder that there’s always a catch; and a right-handed man.

Oh, and some notable balloons.

And I Will Shine My Face Upon You 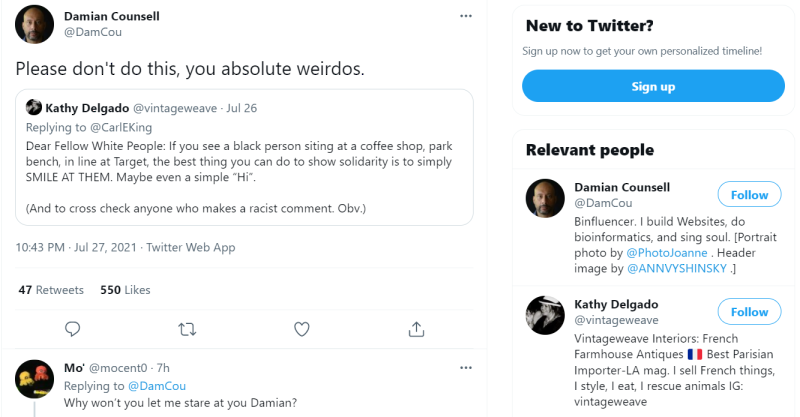 Some of the replies may entertain.

Or You Could Go Full Cronenberg

In the company literature, the words “gender affirming” are used. Seemingly without irony.

For those determined to behold the fruits of “nullification,” “phallus-preserving vaginoplasty,” “vagina-preserving phalloplasty” and other surgical adventures, photos can be found. However, needless to say, search at your peril.

Posted at 06:48 in Anthropology, Engineering, Free-For-All, Pronouns Or Else | Permalink | Comments (128)

Please Stop Objecting To The Assault Of Your Person

An assistant professor at Appalachian State University recently argued that enforcing behavioural standards in public high schools is rooted in racism and unfairly affects Black students. In the article “‘Press Charges’: Art Class, White Feelings, and the School-to-Prison Pipeline,” [assistant professor of art education, Dr] Albert Stabler writes that the desire to punish students for violating school rules, especially when the police are involved, is the result of “the overvaluation of White feelings.”

The article, which you can poke at here, contains many wonders, generally of a kind only the woke can conjure into being. It begins with the obligatory confession of innate wrongness - i.e., “I am a white teacher” – and includes much gushing about non-white students’ “life experiences and cultural knowledge,” before which our educator is eager to prostrate himself, and which have apparently resulted in Dr Stabler’s own “learning and growth as a person.” Particulars on this point - the deep insights of teenagers - are, alas, unclear. And amid the gushing, there are notes of disharmony:

There were many students who regularly received in-school and out-of-school suspensions for what were perceived as disruptive actions.

Not actually disruptive, you see. Merely perceived as disruptive. For no reason whatsoever.

While my classroom materials and my dignity were sometimes damaged by rambunctious behaviour, more dire consequences were regularly enacted on students by school officials (not to mention parents).

We’ll get to some of that “rambunctious behaviour” in a second.

“In… schools,” we’re told, “the desire to punish is racialised,” and “white people’s feelings often have outsized consequences on People of Colour.” The example given to illustrate this alleged phenomenon is of a white, female art teacher - Dr Stabler’s immediate predecessor - who “was said to have wept at the end of every school day” and who pursued assault charges against a black student who forcibly cut said teacher’s hair. This assault, presumably intended to humiliate the woman and assert dominance over her, is passed over with remarkable ease by Dr Stabler, as if the “white feelings” of the teacher, and the implications of such behaviour - and its accommodation by leftist educators - were unworthy of exploration.

Continue reading "Please Stop Objecting To The Assault Of Your Person" »

Motoring scenes. || Sainthood suggested. || Higher power. || “Community art mural.” || So how do you “embody being neuro-queer”? || At last, bendy ice. || Before “capitalism,” everything was free, you know. || On Columbo and intrigue without mystery. || Milk in coffee is “sexist,” also, “white supremacist.” || London liveliness. (h/t, Julia) || Liveliness 2. || Pool 2.0 || Her pronouns are more complicated than yours. || He does this better than you do. || Shoe stash detected. || Assorted sounds, from data centres to Japanese gardens. || At last, a vintage drum machine listening quiz. (h/t, Things) || Man versus mantis shrimp. || Formerly Norman’s. || Footie fans of yore. || And finally, nommy-nommy-nom.

Richard Hanania on the ideological capture of state education:

[T]he movement to ban Critical Race Theory is naive if it thinks it’s going to change much about public schools… A CRT ban might mean a teacher won’t say “Ok, kids, today we’re going to learn about Critical Race Theory!” but they’ll still teach variations of the same ideas. Neither Robin DiAngelo nor Ibram X. Kendi, the two thinkers that seem to offend conservatives the most, identifies as a Critical Race Theorist. In fact, the American Federation of Teachers just announced a campaign to bring Kendi’s teachings to every student in the country, and they don’t appear to be deterred by CRT bans. This is their full-time job, and they’ll still be at it whenever public attention has moved on from the controversy of the day… A state can ban CRT, but if it does, kids are still being taught by the same people who thought CRT for kindergartners was a good idea in the first place.

Somewhat related. And also. And, you know, for eight-year-olds.

An emeritus professor, who wishes to remain anonymous, on the ideology of “white fragility” and its trajectory:

The fundamental claim of White Fragility ideology is that income, wealth, academic, and other outcome gaps are solely the result of white supremacy and can only be eradicated through “anti-racist” measures—that is, by addressing white supremacy, white privilege, and white racism. The behaviour of individuals in groups experiencing negative outcomes is never admitted as a possible driver of disparate outcomes…

If one believes (as is asserted in White Fragility) that all inequality between whites and blacks is due to racism, then racism is a very evil thing indeed and must be eradicated. The mildest action that might be taken to attempt to accomplish this goal is the voluntary re-education of whites. However, according to White Fragility dogma, whites benefit enormously from white racism… [and] are generally unaware that they are doing this. It follows that, given the benefits whites receive from racism, their denial of their own racism, and the discomfort associated with re-education, it is unlikely that many whites would voluntarily submit to re-education. Moreover, even if whites were to voluntarily submit to re-education, according to White Fragility dogma, it is not possible for whites to free themselves of racism. The author, Robin DiAngelo, who is white, makes her living trying to re-educate whites and works very hard at trying to eliminate her own self-confessed racism, but admits that she is still not free of racism.

For newcomers and the nostalgic, more items from the archives:

Natan Last is a “fitful poet,” a Brooklynite, and a graduate of Columbia. Also, he will save us.

The world of woke crossword-puzzlers - because that’s a thing that exists - is one in which enthusiasts, via social media, grumble about white men, bemoan the insufficient prominence of “queer or POC colloquialisms,” share “off-colour jokes about hypothetical titles for a Melania Trump memoir,” and fret about the exact ratio of male and female names used as clues. Because a lack of “gender parity” in crossword puzzle clues constitutes one of “the systemic forces that threaten women.” Crossword puzzles can do that, apparently.

A woe is invented. A solution is discovered.

Gratuitous drama and “drenching guilt” aside, I’m not entirely sure why hiring a cleaner should obviously be more fraught than hiring, say, a gardener or roofer… But for the kind of middle-class feminist who as recreation writes for the Observer, life is apparently an endless moral torture inflicted by minor, everyday events, or at least an exhausting theatre of pretending to be tortured by minor, everyday events. Which of the two constitutes a more harrowing and nightmarish existence, I leave to the reader.

Feminist titan Gemma Hartley bemoans the chore of getting her multiple bathrooms cleaned by someone else.

Ring of Fire. || In post-civilisation San Francisco, the relocation of handbags by fashion enthusiasts. (h/t, Darleen) || For the woman who has everything. (h/t, Things) || Also, layers of London. || Another accident in the lab. || Cats in microgravity. || Attention, amorous ladies. || “How dare you not desire me?” said the green-haired bedlamite. || “I kind of view myself as a doll.” || At last, paper drill bits. || Parental pushback. || Meanwhile, in the Independent. || Meanwhile, in the Guardian. || Hush now, our betters are speaking. || Something error happen. || Yes, there will be a test. || Dull truth. || “Does anything radioactive actually glow bright green?” || And finally, persuasively, some aggressive rattling.

There was an article… by Lauren Rowello – a they, she’s a pronoun pointer, “they/them” – and her article was saying, “Kink belongs at Pride, and I want my children to see it.” The whole thing is… talking about how, if children are exposed to kink, then it will show them that not everyone is into the same stuff, blah blah blah. We used to have a word for that. And that word used to be grooming.

Given recent posts – and lest we assume that all people with gender dysphoria are insufferably woke - this video by Sinead Watson may be of interest. It’s not the most jolly viewing, but it is frank and eloquent, and, I think, informative. Issues touched on include the practicalities of transitioning and de-transitioning; the eye-widening failures of supposed experts; social contagion; and attempts by activists and their cheerleaders to erase the customary boundaries of women and children, and those between childhood and the adult world. Regarding which, Laurie Penny gets a brief mention. The word arsehole is used.

A second, longer video, in which Ms Watson talks with Benjamin Boyce, can be found here.

Lifted from the comments. Which you’re reading, of course.

Posted at 07:55 in Anthropology, Politics, Pronouns Or Else, You Can't Afford My Radical Life | Permalink | Comments (100)

Your Kind Round Here

Like, you have to come out to me as cis and straight.

It turns out that if you, a straight person – or worse, a straight couple - attend a Pride event, your presence may only be tolerated if you meet certain terms and conditions. Please update your files and lifestyles accordingly.

Also, open thread. Have at it, me hearties.