And In Arts News

In juvenile detention, she would write “really radical raps” that rattled her supervisors.

Why, yes, I am reading the Guardian. Where the paper’s Janine Israel is positively gushing over aboriginal rapper Barkaa and her “politically potent” music.

The Malyangapa Barkindji woman… is on the verge of releasing her debut EP, Blak Matriarchy,

You know you want to.

Based in south-west Sydney, Barkaa takes her moniker from the Barkindji word for the Darling River. She comes across as warm and humble,

Warm and humble. An interesting choice of words. And followed almost immediately by:

Earlier this year she played the Sydney Opera House forecourt, the lights of the harbour stretched out before her as she performed her song Bow Down: “They used to look down on me / Look who’s looking up now. Bow down.”

Regarding said ditty, our mistress of the surly pose and monotonous loop informs us,

Born Chloe Quayle, the 26-year-old rapper was a former teenage ice addict who did three stints in jail – during her last, five years ago, she gave birth to her third child.

Despite three children, no father, or fathers, are mentioned. Well. Perhaps we should move on.

Continue reading "And In Arts News" »

I’ve Put The Breakables In Storage

So, why would the influx of women into academia have contributed to its leftward shift, and to the rise of woke activism in particular? As the psychologist Cory Clark notes, women are consistently less supportive of free speech than men, and consistently more supportive of censorship. Compared to men, they’re more likely to say: that hate speech is violence; that it’s acceptable to shout down a speaker; that controversial scientific findings should be censored; that people need to be more careful about the language they use; and that it should be illegal to say offensive things about minorities…

Women are disproportionately represented in Grievance Studies (i.e., disciplines like Gender Studies and Critical Race Theory), which are often little more than a vehicle for left-wing activism… Almost 80% of bachelor’s degrees in “Ethnic, Gender, and Cultural Studies” are awarded to women… [Academia’s left-wing skew] appears to be greater among female academics than among male ones. In a 2016 paper, Mitchell Langbert and colleagues analysed voter registration data on approximately 4,000 US academics. As the table below indicates, the ratio of Democrats to Republicans was “only” 9:1 among men, but it was almost 25:1 among women.

Thanks to Mark Horowitz and colleagues, we also have detailed surveys from two of the most left-leaning disciplines: sociology and anthropology. The table below shows the proportion of male versus female sociologists (from a sample of 479) who agreed and disagreed with various items. Compared to men, women were more likely to say that “Sociology should be both a scientific and moral enterprise,” and that “Sociology should analyse and transcend oppression.” They were less likely to say that “More political conservatives would benefit [the] discipline,” and that “Advocacy and research should be separate for objectivity.”

Needless to say, there are links and charts aplenty.

Update, via the comments, which you’re reading of course:

Some ladies of the left aren’t happy about Mr Carl’s article. Apparently, he could only have written it because he’s “intimidated by intelligent women.” At least, according to a woman who seemingly didn’t find it necessary to read the piece that she’s dismissing, or to rebut any of its particulars, even in passing. As intelligent women do, of course. I’ve yet to see a substantive reply. So far, there’s been lots of glib, self-flattering toss about how noticing certain things can only be explained by a fear of women, or a hatred of them, some rather dishonest attempts at reputational sabotage, and rumblings about the alleged “fragility” of the “straight white male.”

You Will Not Notice Certain Things

More “equity” news from the world of Canadian high-school teachers, where pretending is everything, and acknowledging reality will result in agitation and possibly punishment:

On Monday, the Ontario Secondary School Teachers’ Federation announced that their rules would be changed so that each non-white union member would have his/her vote weighted more than white members.

There are instructional slides and everything. It’s all very jolly.

Attendees were assured that they were “eliminating racism” by endorsing a policy that is itself unambiguously racist and in which one’s leverage very much depends on the colour of one’s skin. You see, building woke utopia requires a little contortion.

Note that objections to the policy were denounced by scrupulously progressive educators, including local union president Cindy Gage, as “harassment” and “harmful language,” and thereby a basis for disciplinary action. To point out that the policy in question is explicitly racist against people with pale skin is, we’re told, “offensive” and “not acceptable.” Those who objected, on grounds of disliking racism, were subsequently accused of “privilege,” which in this case seems to mean an ability to recognise the glaringly obvious.

Update, via the comments, where [+] quips,

Well, indeed. Readers are invited to imagine working in a supposedly highbrow environment, among supposedly clever people, in which politely pointing out a basic logical and moral error – one resulting in actual institutional racism, as opposed to the imaginary kind - results in gasps of indignation, accusations of “harassment,” and many of your peers reporting you for “privilege” and “harmful language,” with a view to getting you punished in some way. And then being told that your intent, however clear and carefully articulated, has absolutely no bearing on whether you’ll be found guilty. It’s positively surreal.

But it does, I think, offer a glimpse into the strange, unhappy world of woke psychology.

The Little People Must Be Made Pious

Is this scene here, I wonder, what’s meant by “class war”?

As noted before, more than once, if someone’s go-to solution, every time, is to impose on others, to harass and bully random people, effectively trapping them, while feeling enormously self-satisfied about their own imagined radicalism – and while clearly titillated by the ability to dominate - then this tells us very little about any purported issue. It’s a moral non sequitur and rather like saying, “I’m troubled by the plight of the Javan rhinoceros, so I’m going to start spitting at the elderly and keying random cars, and then boast about it.” It does, however, tell us what vain and spiteful tossers these creatures are. And how low a priority their wellbeing should be.

We Seem To Be Experiencing Technical Problems

I just want to let glit know that thon is valid, that vir pronouns are valid, and that seir identity is valid.

Cody wishes to educate you about what is valid.

And must therefore be respected. Indiscriminately, it seems. When not talking about her mental health issues and visits to psychiatrists - and, of course, talking about herself, or themself, repeatedly and at length - our non-binary being tells us that,

The times I feel most masculine are, like, when I’m wearing heels and in full make-up.

Not entirely unrelated: You will include your pronouns, or your grades will suffer.

Consider this an open thread. Share ye links and bicker.

Still laid low by this damned bug, so this week you’ll be throwing together your own pile of links and oddities in the comments. However, being heroic, I’ll set the ball rolling with a rock-stacking simulator; some near misses; an inopportune twang; someone taking things literally; the thrill of an educator’s pretty nails; and how to tell you’re in San Francisco.

Oh, and I guess this is good to know. 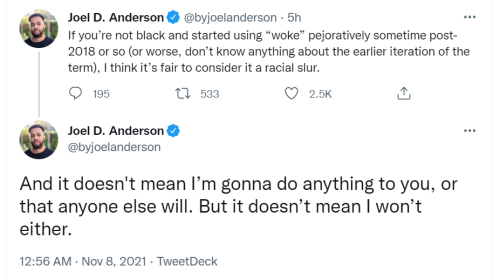 When not publicly threatening to assault people who use the word woke, and being pleased about it, having wilfully construed the term as somehow racist, Mr Anderson writes for Slate, where he tells the world how things really are. Some of the comments by Mr Anderson’s Twitter followers, and their endorsements of his sentiments, are also worthy of note.

Ah. I see a theme developing.

Perhaps Mr Anderson is titillated by the idea of assaulting people and spends his time searching for some convoluted pretext. And having attracted the like-minded, we see people wrapped in a drag of progressive piety – with pronouns gratuitously stipulated, rumblings of opposing some unspecified “fascism,” and the word “ally” in their bios – who thrill to the prospect of white people being walloped simply for using the word woke. It’s a strange kind of righteousness.

If at all highly-strung, maybe look away now. || He builds kalimbas. (h/t, Things) || Big cat diary. || Entirely for the benefit of pedestrians. || Today’s word is broken. || Crab treadmill. || Yes, but are they me…? || Riverside living. || Rome’s imperial poisoner. || Pondering canine head-tilting. || Upscale advent calendars. || “It should be really proud of itself for trying on these new pronouns.” || Pies of note. || Parenting of note. || Possible explanation detected. || The thrill of pumping. || The thrill of tea-bagging. || The Nor-277 tapping machine. || Rock, hard place. || It seems health “equity” requires a little contrivance. || An interesting choice of words. || And finally, wings made of water (and a little detergent).

You Must Lie To Belong

Lifted from the comments:

On the first page of AT&T’s Listen Understand Act internal portal, the company encourages employees to study a resource called “White America, if you want to know who’s responsible for racism, look in the mirror.” The article claims that the United States is a “racist society” and lays out its thesis plainly: “White people, you are the problem.”

When not telling the world that “professional dress codes are inherently racist, sexist, and rooted in white supremacy,” and failing to grade papers on time, a shortcoming that crops up repeatedly, Mr Segal likes to paint his nails, play dress-up in class, and talk about the state of his mental health. A topic also revisited more than once.

Update, via the comments, where Alice asks,

Are there any actual grown-ups left in the teaching profession?

I’d imagined that one of the functions of dress codes and broader expectations of workplace professionalism is that they help to filter out the delinquent narcissists. People who just can’t get over themselves. Say, 30-year-old men who like to bemuse 12-year-olds by playing dress-up in class, announcing how “non-binary” they are, and painting their nails.

And not, in fact, to bolster some phantom “white supremacy.”

And again, as so often, the above does make one wonder about Mr Segal’s focus on the task at hand and his priorities, which seem to extend no further than himself. Or themself, I suppose. It doesn’t seem unfair to wonder if the children - the children he’s employed to educate - exist primarily as a captive and uncritical audience, there to applaud his self-preoccupation. The hashtags #tiktokteacher and #teachersoftiktok feature prominently, however, the only video I could find in which Mr Segal speaks of what the children in his care have learned in class – a topic you’d think might be mentioned occasionally - involved the children feeling obliged to regurgitate his contrived pronouns.