Tales From The Far Side (2)

Further to recent rumblings in the comments, a tale about the perils of noticing things:

She describes the emails as “rather polite” and “relatively kind.” Her daughter had been a Girl Guide, and she herself had done some volunteering with the organisation. “I thought it was a really uncontroversial, uncontentious email,” she says. It expressed her view that “this person should not be in charge of young people.” (The Critic has seen the email and can confirm her description of it. It does, however, refer to Sulley as a “male”…)

And that’s when a police officer appeared on her doorstep.

Posted at 07:05 in Anthropology, Free-For-All, Parenting, Policing, Pronouns Or Else | Permalink | Comments (80)

How Dare You Not Pretend

In the comments, Mr Muldoon steers us to the latest mental rumblings of Ms Laurie Penny:

Ms Penny is, I think, referring to fellow feminist Julie Bindel, whose review of Laurie’s latest book is not entirely positive, and who chose not to refer to its author as a suddenly ungendered being. But the broader claim is perhaps worth exploring.

I can’t say that my own views on modish pronoun stipulation make me feel “cool and edgy.” If anything, they seem fairly self-evident and unremarkable, not the stuff of obvious scandal or sudden intakes of breath. And I doubt that anyone here is likely to feel “threatened… by the ideas of a more progressive generation.” Though Ms Penny’s tendency to self-flatter – her inevitable trajectory – does catch the eye.

Regarding rudeness, I’m generally polite by default, at least in person, and don’t go out of my way to needlessly put a kink in someone else’s day. I’ve had perfectly civil chats with people who regard themselves as transgender or gender-non-conforming or whatever. Nobody got upset. But what is often being asked – or demanded – is not a small thing, not in its implications.

Taken broadly, we are being asked to affirm, wholesale, a bundle of phenomena that includes not only actual gender dysphoria, whether the result of developmental anomalies or childhood molestation, but also autogynephilia, serious personality disorders, adolescent pretension, and assorted exhibitionist and unsavoury compulsions. The expectation seems to be that we should take these different phenomena, with very different moral connotations, as being one and the same thing, and then defer to them, habitually and uncritically. Which is asking rather more than can readily be agreed to.

Continue reading "How Dare You Not Pretend" »

Posted at 08:56 in Anthropology, Feminist Fun Times, Politics, Pronouns Or Else | Permalink | Comments (125)

Where many things come with sliced tomato. 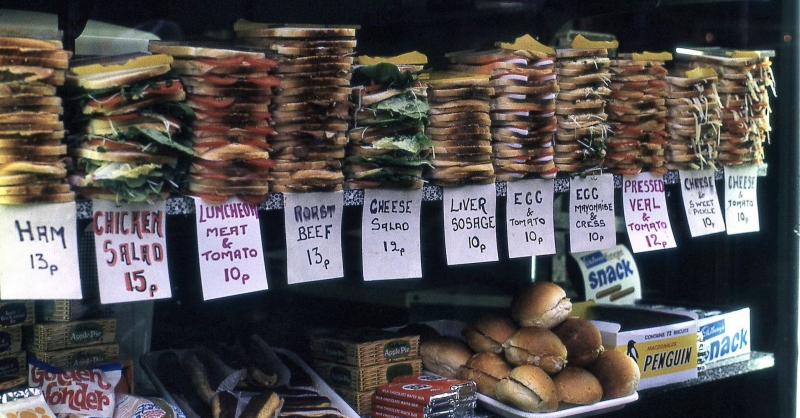 Via Tim Newman. Consider this an open thread.

The thrill of twins (a drama of expansion) || Anything you can do, I can do better. || An ode to preserves. || A project for the weekend. || Seattle public schools, you say. || The progressive retail experience, parts 408, 409 and 410. || Repair job, watched closely. || At last, lamps made from croissants and leftover bread. || Absurdle, adversarial Wordle. || One of these objects is not like the others. || Public-information billboards of note. || Being “anti-racist,” she doesn’t depict them. || Touchdown. || At last, lab-grown hair. || His and hers, a comparison. || Heh. || Cold sorcery. || It’s a consolation, I suppose. || Fondling scenes. || Insert finger, please. || And finally, remember, your cat is trying to kill you.

The Sound Of Shoehorning

Granted, hanging up spoons in straight rows isn’t quite as impressive as the oeuvre of Rembrandt. But if we pretend hard enough, maybe it will seem as if it were?

Photographs of which can be found here. This one in particular is quite a feat.

In the comments, Joan adds, “They want to spoil everything.” Indeed, the tone of the exhibition notes is reliably sour and anhedonic. Only the contrivance is amusing, albeit unwittingly. And it occurs to me that it would save a lot of time and rhetorical straining to simply stamp each artwork with the words “BAD WHITEY.” The effect would be much the same and with little loss of meaningful content. It’s also worth pondering the term “white degeneracy,” and whether any other racial demographic would be subject to similar usage in the official display notes of a mainstream art exhibition.

It seems to me that juxtaposing Rembrandt’s paintings with half-arsed tat by the ungifted-but-heroically-brown - an unremarkable frame, some spoons in rows – is not a great way to establish the implied artistic parity. But in order to be woke and right-thinking, we must somehow will the equivalence into being. Or at least pretend.

And this is why wokeness is corrupting. It eats away at realism, and at honesty.

This just in. Clown-self pronouns:

In this situation, I would make sure that I exclusively use clown pronouns to talk about Cypress, so Cypress knows that I see clownself for who clown is.

If you would like Maybe Burke, above, to provide “personal growth trainings” – say, regarding how you may speak when transgender people both are and aren’t present - by all means, knock yourself out.

Apparently, we non-transgender people, almost the entire human race, are supposed to embrace the prefix cis and use it continually, habitually, in order to suggest that being transgender is in no way atypical, niche, or anomalous. And to erase distinctions between, say, actual women and trans women, i.e., men with mental health problems. And this is said by someone bedevilled by urges to control what others may say, even in private, and even to control what they may think. Which itself is rather noteworthy. One might say anomalous.*

Posted at 08:05 in Anthropology, Free-For-All, His Pretty Nails, Pronouns Or Else, Psychodrama | Permalink | Comments (126)

The Restaurant of Mistaken Orders. || Well, it must’ve rattled loose. || At last, a robotic bartender. || Bird feeder. || I bring you art. || Babe detected. || His back-yard view is better than yours. || You can’t go far wrong with accelerated penguins. || In fairness, it was his first attempt. || Just wind and frozen sand. || Phantom nipples. || Near miss detected. || Now you do it. I’ll start the clock. || Incoming. || Satisfied customer. || Strange dog. || Dentist’s magic hat. || When the day just keeps getting worse. || You want one and you know it. || He has a theory, ladies. || The tardigrade’s toes (and tiny things digesting other tiny things). || And finally, for the sleepy kiddies, there are goblins lurking under the bed.

Oh, and a reminder that I now have a Gettr account.

Lifted from the comments, a technological feat:

Readers are invited to spot the word that’s doing the heavy lifting. It appears 1o times in the article quoted above, excluding variations.

The red-light and speed cameras are, we’re told, “distributed roughly evenly among the city’s Black, Latino and white neighbourhoods.” Despite which, “the ticketing rate for households in majority-Black ZIP codes” is “more than three times that of households in majority-white areas.” And so, explanations are searched out, including the width of a given road, the effect of passing vacant lots, and the geographical distribution of grocery stores. “Structural racism” is of course invoked, a phenomenon that apparently includes ticketing cyclists who choose to ride on the pavement, illegally.

Those presented as victims of injustice, of “racial inequity,” include Mr Rodney Perry, whose photograph accompanies the piece, and who, in a single year, has received eight tickets for speeding and three for running red lights. The article appears not to have had room to include the views of those injured or bereaved by Chicago’s law-breaking motorists, despite an eye-widening spike in accidents, fatalities, and hit-and-run crashes. Nor, it seems, was there room to consider the possible effect of endless, widespread excuse-making for antisocial behaviour, and its role in making such behaviour more likely, not less.

See also the words disparate, disparity and disparities, which occur no fewer than 22 times.

Rafi notes the article’s supposed candidates for our sympathy - the best that could be mustered, presumably - and adds, “They chose poorly.” Well, as a pin-up for victimhood, a basis for our collective weeping, Mr Perry is a, shall we say, suboptimal choice. But apparently, we are expected to sympathise with Mr Perry, our habitual lawbreaker, and to indulge his excuses, on account of his difficulty paying the $700 in fines that resulted from his repeated law-breaking. As if the financial consequences were inexplicable and somehow unforeseeable. Though it seems to me that not being in the best position to pay the fines that normally result from such law-breaking is a pretty good reason to avoid said law-breaking - specifically, repeatedly running red lights and thereby endangering other people’s lives.

At which point, it’s perhaps worth noting that many of the, as it were, racially insensitive cameras are located near schools.

The World Of Tomorrow

Goldfish are capable of navigating on land, Israeli researchers have found, after training fish to drive. The team at Ben-Gurion University developed an FOV - a fish-operated vehicle. The robotic car is fitted with lidar, a remote sensing technology that uses pulsed laser light to collect data on the vehicle's ground location and the fish's whereabouts inside a mounted water tank. A computer, camera, electric motors, and omni-wheels give the fish control of the vehicle.

Oh, and for those that care about such things, I now have a Gettr account.

Crumbs Made Her Unhappy

Speaking of ladies who write for The Atlantic, here’s senior editor Honor Jones a-gush with expression in the Family section:

I loved my husband; it’s not that I didn’t. But I felt that he was standing between me and the world, between me and myself… I had caused so much upheaval, so much suffering, and for what? He asked me that, at first, again and again: For what? So I could put my face in the wind. So I could see the sun’s glare.

It’s a tale of divorce, you see, and rather sad, and just a little confusing. For instance, exactly why the divorce came about is not immediately obvious. There’s no mention of affairs, or hardship, or emotional cruelty. In fact, and despite 3,000 words, the husband is barely mentioned, except as an unwitting hindrance to some nebulous fantasy of self-exploration, or at least self-dramatization. Indeed, we’re presented with a loving husband and comfortable middle-class life, in which one chats with architects and browses the Instagram accounts of cabinet makers, while weighing the merits of soapstone kitchen counters.

Here, I should point out that Ms Jones also has three small children. Though their wellbeing doesn’t appear to figure too heavily, or much at all, in the extended ramble of the article. However, we do hear a lot about other, more important matters:

the crumbs got me down.

Crumbs are a recurring topic, mentioned seven times, along with a dislike of vacuuming. Truly, a life of unrelenting hell. Albeit with a cleaner to do much of the heavy lifting:

I hired a woman named Luba to clean… I loved talking with her. She was full of sensible advice, like how I should really stop washing the cleaning rags along with the children’s clothes, because the chemicals could irritate their skin.

We’re then informed that a comfortable middle-class life, in which time can be spent choosing new kitchens and chatting with the cleaner, is actually an oppressive experience:

Continue reading "Crumbs Made Her Unhappy" »