Or, The Minefield Of Modern Progressive Manners: 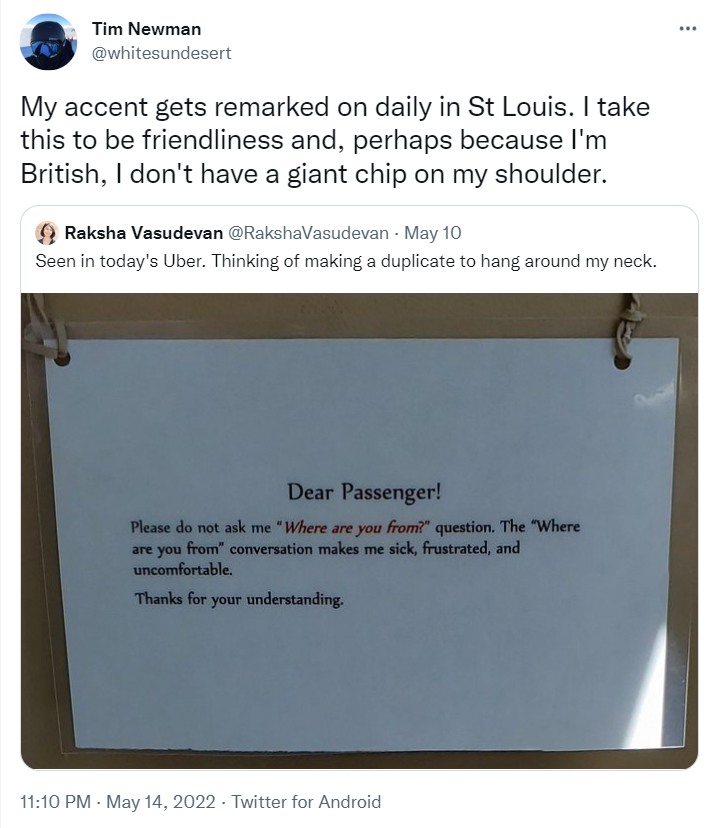 A thread ensues, with much rumbling about “othering,” “whiteness” and “racism.” Needless to say, Ms Vasudevan’s own website merrily tells us where she’s from. The thing we’re not allowed to take an interest in, however fleetingly.

Being fashionably progressive, and a New York Times contributor, Ms Vasudevan has learned to use the words “white” and “whiteness” quite a lot, generally with pejorative connotations. On account of her not being racist, you see. Her interests, we’re told, are “colonialism, race, and climate change.” She also makes a point of telling us that she lives on “Arapaho and Cheyenne land,” i.e., in Denver.

As noted before, following this somewhat related item, the people who insist on these woke protocols act as if they themselves had never had to make polite, albeit clumsy conversation, or had to get to know someone with, at least initially, some pretty simple, even dumb, questions.

A couple of years ago, I was at a family party, to which a niece had brought a Spanish exchange student who was staying with her. It was a large gathering, and the young woman looked a little daunted and left-out. Her English was fairly limited and my Spanish non-existent, so our conversation, such as it was, was fairly basic. In between offering her drinks and sandwiches, etc., and several awkward smiles, I distinctly recall asking some pretty inane questions. I like to think she understood that I was trying to make her feel welcome. Rather than just some bigot, or a dumbass with no conversational flair.

Again, as so often, the umbrage seen above is pretentious and implicitly non-reciprocal. If I were to migrate to live in, say, South Korea and Korean people sometimes asked me where I was from, even if they did this several years after my arrival, I wouldn’t think it inherently impolite or malicious. It might get a little hackneyed, a little boring, but I very much doubt that it would make me feel “sick, frustrated, and uncomfortable.” And were I to get all pissy and indignant about being asked this humdrum question, I suspect Ms Vasudevan and her peers would be ready to scold me for my “privilege” and “fragility,” my “whiteness.”

And yet even this simple role-swapping isn’t considered - or isn’t considered an acceptable line of thought. Which possibly says something about wokeness. And the kinds of people it attracts.

Consider this an open thread. Share ye links and bicker.

[ Finishes bringing catapults and thousands of ostrich eggs on board. ]

My galleons sail at dawn!

anyone with a sincere attachment to roots finds others' roots enriching

That would be to apply principles reciprocally.

Their pride in their ancestry and cultural inheritance is the noble struggle of an oppressed people.

Your pride in your ancestry and cultural inheritance is toxic nostalgia for a past that never existed.

Your admiration for their cultural inheritance is exoticism, appropriation, colonial gaze.

Their admiration for your cultural inheritance... Not often expressed, unless it relates to your culture of tolerance and openness - to them. To grant that you had a perfectly good culture before they came along would be to open up all sorts of unflattering questions.

The collective guilt you inherit from your ancestors is something that they are willing to bring up. Any guilt they might have inherited from their ancestors (i) is too culturally complex for you simpletons to deal with, (ii) because of colonialism is really your guilt, (iii) was washed clean in the arrivals hall of JFK airport.

virtually all people live by what I think of as a "fiction-absolute." Each individual adopts a set of values which, if truly absolute in the world--so ordained by some almighty force--would make not that individual but his group . . . the best of all possible groups, the best of all inner circles.

... I had arrived [at a Latino conference] believing that, for example, Mexicans who had gone to the trouble of coming to the United States legally, going through all the prescribed steps, would resent the fact that millions of Mexicans were now coming into the United States illegally across the desert border. I couldn't have been more mistaken. ... The very existence of the debate itself was to them a besmirching of their fiction-absolute, of their conception of themselves as Latins. Somehow the debate, simply as a debate, cast an aspersion upon all Latins, implying doubt about their fitness to be within the border of such a superior nation.

I couldn't have been more mistaken

TL;DR: human beings are hierarchical tribal nomads and always have been.

According to Private Eye's Palace insiders, HM The Queen always gets conversation rolling with:
"Have you come far?"

A new Indian restaurant opened in a nearby city. My wife, hearing the manager's accent and always curious about people, asked the manager "Where are you from?" He says "New Jersey".

At our favorite Indian restaurant in another city, if you ask the owner where he is from he says: "Chennai".

Originally from the Midwest, I have lived in the Deep South for 37 years. Recently an 18 year old store clerk, on hearing me speak a sentence, declared "You're not from around here, are you?"

About 35 years ago, I had been in the South for about two years when I visited my mother "up North". She marveled at the southern accent I had acquired so quickly. She didn't need to ask me where I was from.

No so long ago asking someone where they were from was viewed as a friendly conversation starter.

My wife, hearing the manager's accent and always curious about people, asked the manager "Where are you from?" He says "New Jersey"

Surely restaurant operators should know that while a white person's concern with blood and soil is discredited and hateful in most contexts, it's highly respectable among foodies, a sign of the broadness of their minds and the fine-grainedness of the diversity that they can appreciate.

The patrons of the restaurant want to be able to say to their friends that it wasn't serving generic Westernized Indian food, but that the proprietor comes from a specific town in Tamil Nadu, which as you should know has a completely different culinary tradition than towns even a few miles away, and that he's the seventh generation of his family to cook this particular dish.

And promoters of restaurant-based immigration want to be able to say that no, it's not possible for America's highly trained cooks to learn how to make this food. You have to be from this town, you have to be the seventh generation. Blood and soil. Are we not depriving the town in India of its talented cooks, uprooting its fine traditions, and risking the next generation giving up cookery to become lawyers? It's a sacrifice they're prepared to make so that America's foodies don't miss out.

Some years ago I interviewed a senior Hong Kong Chinese lawyer whose English was very distinctly Teeside (an accent that most British find difficult to understand). Turned out he was actually born in Jamaica.

"I got asked for directions by tourists all the time.

Another one of the brethren. Some of us must have a certain look. It doesn't matter where I am in the world, it's a given that someone will ask me for directions."

My wife is a librarian and this happens to her all the time. It seems to be a common occurrence for librarians.
Something about their faces says "Ask me anything."

My wife is a librarian and this happens to her all the time.

A new Indian restaurant opened in a nearby city. My wife, hearing the manager's accent and always curious about people, asked the manager "Where are you from?" He says "New Jersey".

Try to keep this short...I had pretty good reason, due to other objectively wrong information, that a police report that I was waiting on contained other information implicating an innocent party. A young man, who spoke clear English but of what looked to me to be Asian/Hispanic origin was listed in the report as Vladimir VeryRussianLastName. I didn't specifically recognize the language in which he spoke to his mother on the phone but for some reason I surmised it to be Tagalog...Because I'm such a genius...Since the address given (another address was obviously incorrect) did indeed indicate Mr. & Mrs. VeryRussianName lived in apartment 'E', in apartment 'B' lived the Ramos family. As I had waited on this report for almost a week (I was told that they needed to verify info before releasing it) I had the sneaking suspicion that actually two pieces of info were wrong. My suspicion being amplified by the attitude of the records clerk in refusing to be wrong about anything. So anyway, I decide to investigate for myself because I just had to know WTF like...so I go to apartment 'E', knock on the door, and the mother, whom I recognized answered. Turns out she was Turkmenian and her husband was 3/4 Turkmenian as well. Oh, we had a very nice but loooooong conversation in which through broken Turkenglish I emphasized that I was only there to make sure an innocent party was not implicated, not because of whatever trivial thing her son had done the previous weekend.

BTW, if you know any Turkmens who are considering moving to Kissimmee, FL (about 30 miles south of me) I would advise them to stay away. She no like it there. Family values not in line with what they were trying to get away from in the first place.

I don't care where she's from. I just wish she'd go back there.

You must know where the Chinese restaurant is!

As an Indian, I am afraid the onus lies entirely upon westerners for such behaviour - both the "wokes" and the non wokes who put up with it.
India has 25 odd states, many different languages, cultures etc. It is considered fine, even friendly, to ask people where they are from, to "appropriate" each others dress and food, to mangle or even make fun of funny sounding Indian names.

And as for " India has an incredibly rigid, stratified caste structure and the only Indians who can afford to emigrate are from the upper castes"
Is exactly the kind of racist rubbish that is given a pass in the West.
In decades of working with fellow Indians, hardly anybody cares about caste, everyone mingles together, caste-blind marriages are common, we have a very popular "lower caste" prime minister.

The Indians who migrate to the West and form the most well educated, highest earning group by far, come from a range of castes and income groups. Plenty are from extraordinary weak financial and social backgrounds. I know, I am one of them and so are half my fellow immigrants.

Samir: Thank you for writing that.

The few Indian immigrants that I have known showed no snobbery or arrogance. All open, nice people.

The few Indian immigrants that I have known showed no snobbery or arrogance. All open, nice people.

Generally been my observation as well having worked with many. Though my guess is my experience has been mostly with the higher castes. However I have observed certain attitudes between people I surmise to have come from the more middling castes. Also a significant prejudice against Dalits.

I was asked by Pilipino co-workers in Toronto, Canada where I was from, where were my parents from? They just couldn't seem to wrap their minds around the concept that me and my parents were from right here. They must have thought my country was a completely uninhabited wasteland just one generation ago. I was more amused than offended.