I Didn’t See That Coming

A Test of Patience

“The only adhesive used in his work is gravity.” 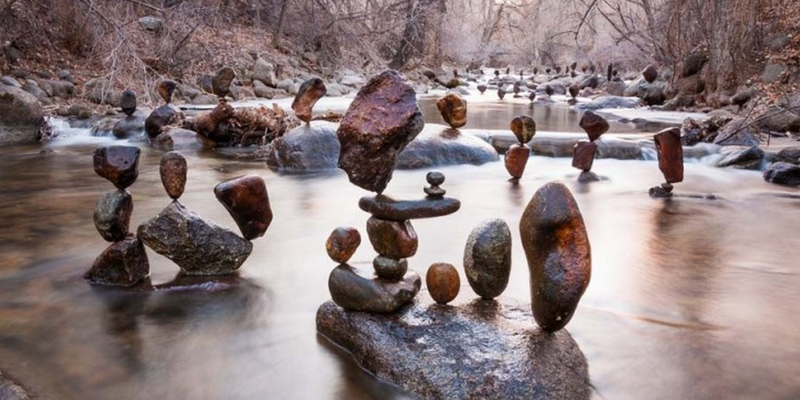 There May Be Some Swelling

The 23-year-old ended up in hospital where his penis had to be drained of two pints of blood – after suffering from an erection lasting 17 hours.

Jason first woke up with the condition last Friday morning and initially didn’t worry about it. However by lunchtime he was beginning to get concerned and tried to address the situation by...

taking an ice bath and then going for a jog.

When these measures failed,

He went to the hospital where his condition was diagnosed and doctors drew off two pints of blood to try and reduce the pressure. They also had to inject medication 24 times to restrict the blood flow.

Mercifully, this tale has a happy ending.

All is now well with Jason, who described the pain of his treatment as “ten out of ten.” “It is completely normal now,” he added, “apart from the fact that it looks like it’s been through a war. It’s all a bit black and blue.”

Two hot air balloons and a tightrope. What could possibly go wrong?

Filmed by Sébastien Montaz-Rosset, the chap who made this.

They Must Get in the Way

For newcomers, a selection of short films and documentaries from the archives.

Till Nowak visits the Institute for Centrifugal Research. An adventure in human endurance and excessive G-Force.

The un-named man, who appears to have been home at the time, was left unable to move, but luckily had his mobile phone close by. Firemen who attended the scene were able to free him from the object successfully, but he did require on the spot medical treatment from paramedics. The firemen then provided the man, from Newport, South Wales, with “suitable advice” to avoid getting into a similar predicament again.

I suppose it’s possible he slipped and fell onto it, quite firmly.

In Other Time Machine News

Via Iran’s FARS news agency, this just in:

[Inventor, Ali] Razeghi also claimed to have beaten competitors working on similar devices: “The Americans are trying to make this invention by spending millions of dollars on it where I have already achieved it at a fraction of the cost.” He added that he is concerned about industrial espionage, as other nations will be eager to learn his secrets. “The reason that we are not launching our prototype at this stage is that the Chinese will steal the idea and produce it in millions overnight,” he said.

I know, I know. But wait. History is already being rewritten.

Mark Steyn on the decline of the family (and what that costs):

Seventy percent of black babies are born out of wedlock, so are 53 percent of Hispanics… and 70 percent of the offspring of poor white women. Over half the babies born to mothers under 30 are now “illegitimate” (to use a quaintly judgmental formulation). For the first three-and-a-half centuries of American settlement the bastardy rate (to be even quainter) was a flat line in the basement of the graph, stuck at 2 or 3 percent all the way to the eve of the Sixties. Today over 40 percent of American births are “non-marital”… The most reliable constituency for Big Government is single women, for whom the state is a girl’s best friend, the sugar daddy whose cheques never bounce. A society in which a majority of births are out of wedlock cannot be other than a Big Government welfare society. Ruining a nation’s finances is one thing; debauching its human capital is far harder to fix.

See also Heather Mac Donald here, here and here. Or if you’re feeling terribly radical and edgy, you could do as Laurie Penny says and “fuck marriage,” “fuck monogamy” and fuck all of those other “small ugly ambitions.” What could possibly go wrong?

Patrick Hennessy spies some slack in the system:

Ministers will hit back in the row over welfare this week by publishing a raft of figures which they say show that tough measures - or the threat of them - are already “changing behaviour” by seeing people drop their claims. These include the figures on incapacity benefit. As well as the 878,300 who chose to drop their claims [rather than face a medical], another 837,000 who did take the a medical test were found to be fit to work immediately, while a further 367,300 were judged able to some level of work. Only 232,000 (one in eight of those tested) were classified by doctors to be too ill to do any sort of job. Some 30 people claimed they were unfit to work because of blisters, while 60 cited acne and 2,110 said “sprains and strains” rendered them unfit for employment.

Thomas Sowell ponders guns and what’s rarely said about them:

If someone comes at you with a knife and you point a gun at him, he is very unlikely to keep coming, and far more likely to head in the other direction, perhaps in some haste, if he has a brain in his head. Only if he is an idiot are you likely to have to pull the trigger. And if he is an idiot with a knife coming after you, you had better have a trigger to pull. Surveys of American gun owners have found that 4 to 6 percent reported using a gun in self-defence within the previous five years. That is not a very high percentage but, in a country with 300 million people, that works out to hundreds of thousands of defensive uses of guns per year. Yet we almost never hear about these hundreds of thousands of defensive uses of guns from the media, which will report the killing of a dozen people endlessly around the clock. The murder of a dozen innocent people is unquestionably a human tragedy. But that is no excuse for reacting blindly by preventing hundreds of thousands of other people from defending themselves against meeting the same fate.

And Chris Snowdon is momentarily optimistic about the culling of quangos:

One of the coalition’s stated priorities after the general election was to have a “bonfire of the quangos” which would save the taxpayer £2.6 billion and rid us of numerous pointless bureaucrats. Three cheers for that, of course, and some progress seems to have been made, with more than 100 of these parasitic organisations biting the dust. It is, however, notoriously difficult to slim down the size of the state thanks to the vested interests who depend upon it. Governments are also incredibly inefficient even when it comes to closing things down. Almost unbelievably, the cost of the bonfire will be £830 million — nearly twice the original estimate — and the government could not resist setting up some new quangos in the process.

Gravity is a Mistake

A mistake that the Institute for Centrifugal Research works tirelessly to correct. The ICR’s “pioneering achievements in the realms of brain manipulation, excessive G-Force and prenatal simulations” are illustrated, quite vividly, in Till Nowak’s short documentary, presented below. I beg you, please, wait for the ‘wedding cake’ amusement ride.

Via Things, a site you may want to bookmark.