Via Holborn, and from the pages of the communist Morning Star, a headline of crushing cultural import:

Yes, with an election looming, the full weight of the nation’s leftwing “poetry community” is being brought to bear, no doubt decisively. Inspired and uplifted by these leftwing poets and their immense cultural gravity, “our austerity-scarred society” will be “healed” with the balm of “social justice.” Being leftwing poets, there are of course demands attached, including an entirely selfless call for even more “state support for… producers of the arts and culture” - half a billion or so a year being deemed insufficient, you see - along with a “universal basic income pilot,” and “an end to the political scapegoating of the unemployed.”

No tittering at the back.

Readers who can recall a line of verse by any of the signatories will receive a drinks voucher.

And if searing leftwing poetry is your thing, you may wish to gargle the radical outpourings of Mr Roy G Guzmán.

For newcomers, more items from the archives:

You see, those “right wing, centrist, or politically complacent parents” - the parents you love, presumably - must be purged of their “ill-informed allegiances” and made to conform politically, with the threat of never seeing grandchildren. Which is how well-adjusted adult offspring behave, of course… Ms Cauterucci’s parents are no doubt proud of their daughter and her charming, terribly enlightened fantasies of coercion, in which children are imagined primarily as a form of political leverage, a tool of rather sadistic emotional punishment. And all in the name of progressive piety.

Your Failure To Enthuse Is Violence, Apparently.

Roy G Guzmán is oppressed by the “violence” of people not liking his poetry.

After dismissing the recent, rather negative appraisals of his work as driven by “toxic masculinity” and “(white) male fragility” - no other possibilities being conceivable, of course - Mr Guzmán has apparently retired from Twitter. We are, it seems, a terrible disappointment to him.

Their marriages failed, they have psychiatrists on speed-dial, and it’s all Trump’s fault. Oh, and white men, obviously.

Damned If You Do

We’re in the midst of a renaissance in First Nations literature. I should be elated… So why do I feel this restlessness?

Appearing as a headline guest at Australia’s recent Stella Prize longlist party, “a celebration of women’s writing,” Ms Whittaker felt a need to air her “itching discontent” and “confront” the “majority white audience” for the sin of pretentious enthusiasm – namely, their enthusiasm for works by people such as herself:

I talked about the “endless, patronising praise” I got from white audiences, and how I salve it with the frank reading of Indigenous women who “do you the dignity of taking you seriously.”

Fun night. We must do this again.

We’re told that being a “coloured” or “Indigenous” writer is fraught with “structural oppression,” on account of being “marginalised” – as when being invited to literary award parties and then swooned over by pretentious pale-skinned lefties. “Whiteness” and “white men” are particular burdens to Ms Whittaker and her peers, whose suffering – their “collective plight” - is seemingly endless and endlessly fascinating, at least among those for whom such woes are currency. As Ms Whittaker’s world is one of practised self-involvement, her point is at times unobvious. However, our unhappy poet appears to be annoyed both by “underwhelming responses” to her own writing and by insufficiently convincing displays of approval. All that “endless patronising praise.”

At which point, the words high maintenance spring to mind.

Continue reading "Damned If You Do" »

In which we marvel at the mental contortions of our self-imagined betters.

The year began on a highbrow note as the University of Denver’s Professor Ryan Evely Gildersleeve informed the world that laziness is a “a political stance,” a way to “combat the neoliberal condition,” and a “tool for contributing to social justice.” Half-arsed incompetence is, we were assured, both radical and empowering. The professor also shared his belief that plastic is sentient. Inanimate objects also troubled Dr Jane Bone, a senior lecturer at Monash University, Melbourne, who specialises in “feminist post-structural perspectives” and the political implications of problematic furniture. Dr Bone’s research involves quite a lot of “embodied knowing,” i.e., visiting IKEA and sitting on chairs. Her work, she revealed, is “not necessarily logical.” Further feminist insights came via Phoebe Patey-Ferguson, whose feminist fight club is “a mode of resistance,” because the spectacle of unhappy ladies body-slamming each other and breaking each other’s ribs is an obvious way to “destroy the Conservative government” and “bring down the patriarchy.”

In February, we turned our attention to the world of aesthetics, where performance artist Sandrine Schaefer presented her buttocks to the world then waited for applause. We also learned that space exploration is all about “abuse” and “male entitlement,” thanks to Women’s Studies educator Marcie Bianco. Ms Bianco, who claims that sending spacecraft to Mars is akin to grabbing ladies’ genitals, teaches “social justice courses” at Rutgers University and John Jay College.

The ability of Jordan Peterson to trigger fits of theatrical hysteria among leftwing students was a highlight of March, when an attempt to speak at Queen’s University, Ontario, resulted in memorable and telling scenes, as students unleashed their inner screeching id. Also memorable, though for very different reasons, was this short, rather lovely film by Alex Gorosh and Wylie Overstreet. And at Simmons College, where recreational indignation is very much in fashion, and annual tuition is a mere $40,000, we learned that responding to a sneeze with the words “bless you” is problematic and oppressive, and that compiling lists of things that are problematic and oppressive, and therefore to be avoided, is itself problematic and oppressive.

Your Failure To Enthuse Is Violence, Apparently

Mr Roy G Guzmán, whose tweet appears below, describes himself as “a marginalised writer,” and an “artist and influencer,” thereby signalling to lower beings both his suffering and his modesty. He’s also, it seems, a tad sensitive: 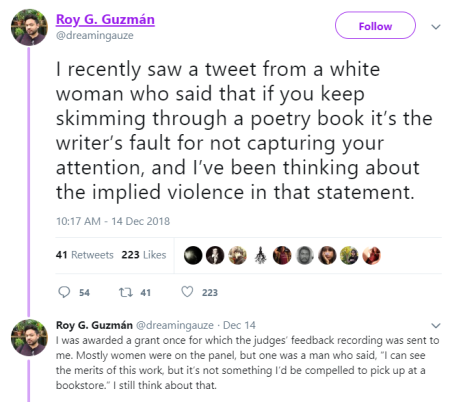 Note the gratuitous use of white woman. Perhaps that tells us something about Mr Guzmán’s poetic soul. A sample of Mr Guzmán’s creative output, titled Queerodactyl, is reproduced in full below. But before we venture further, you may wish to grip the arms of your chair:

Continue reading "Your Failure To Enthuse Is Violence, Apparently" »

Because you crave more feminist poetry and Ms Desireé Dallagiacomo feels the need to share:

“My thighs feel upset because you only offered one bite of your Ben & Jerry’s Cherry Garcia.” Previously.

My whole life, I had struggled with patterns of behaviour and emotion that I knew were “bad,” but couldn’t seem to control. I lied compulsively about things that didn’t make sense. I was terrified of being abandoned, to the point that I became furiously, sometimes abusively, upset if I thought that my friends were hanging out without me. I was full of self-loathing and anger that I bottled up, and then released by self-injuring.

Yes, we’re visiting the pages of Everyday Feminism. How could you tell?

And, of course, I had grown up as a closeted trans girl of colour in a cis, white supremacist society.

So far, so humdrum.

Ever since I could remember, I had been filled with rage and fear and self-loathing as a result of the constant messages that society, friends, and family sent me that said I was deviant, bad, wrong to the core.

A chronic rage that, we’re told, prompted some introspection, of a sort, and a peek inside a textbook on abnormal psychology:

My “symptoms” fit the profile of a mental disorder called Borderline Personality Disorder, a condition closely associated with psychopathy. It was, the textbook said, historically considered untreatable.

Oh, I’m sure lashings of strident feminism and identitarian seething will put that right in no time. No? The author of this cheerless tale, Ms Kai Cheng Thom, a “trans woman writer, poet and performance artist based in Montreal,” then goes on to bemoan the fact that “disorders like violent psychopathy” are “generally considered unlikeable,” possibly hazardous, “even in social circles that consider themselves progressive.” And that, while the public at large may be sympathetic towards people suffering clinical depression, “compassion for psychopaths, pathological liars, or narcissists” is, inexplicably, harder to come by. It’s all terribly unfair. Because incorrigible monsters bent on the manipulation and harm of others have feelings too:

Because I know you hunger for a feminist poetry slam, here’s Anna Binkovitz sharing her inner being:

“When the tree of me falls in orgasm, it does not matter if there is no one else there to hear it, I make a goddamn sound.”