In which we marvel at the mental entanglements of our self-imagined betters.

Our year began in academia with a discussion panel of stern and pious ladies. Among them, Professor Judy Haiven, who believes that male students mustn’t speak first and must always defer to women, until the menfolk learn their place in the ‘progressive’ pecking order. Professor Haiven denounced the evils of an alleged male “monopoly” in a campus environment where women outnumber men, and while sitting on a panel with no male participants, and with no-one present to argue a substantively different view. Days later, and while reminding the world that she’s “a Journalism Fellow at Harvard,” our dear friend Laurie Penny struggled with the thought that printed newspapers tend to have an even number of pages. And artists Eames Armstrong and Matthew Ryan Rossetti showed us how to improve Shakespeare by “transgressing conventions,” “destabilising visibility,” and shrieking incoherently in various states of undress.

In February, Professor Janice Fiamengo, a critic of campus feminism, illustrated just how readily feminist “activism” blurs into sadism and sociopathy, while exposing how leftist groups are indulged by administrators with what amounts to a unilateral license for thuggery, disruption and physical violence. A sort of light relief came via an introduction to mukbang, the South Korean phenomenon of watching strangers eat, prodigiously and at length, on the internet. Further distraction was offered by the world of performance art, students of which shook our tiny minds with “intersectional meaning,” “the politics of identity” and three whole hours of radical pavement mopping.

The rise of the hipster breakfast alarmed us in March, as did the more disastrous pretensions of ‘progressive’ education policy, in which classroom aggression was excused on grounds of race and imagined group victimhood, resulting in a widespread surge in violent assaults against staff and other students. As students’ hair was set on fire and female teachers were repeatedly punched in the face and hospitalised, “restorative justice co-ordinator” Eric Butler boasted, “I don’t blame, I don’t punish.” Adding insult to very real injury, white teachers who found themselves being beaten in class were subsequently asked not to press charges, because of the difficulties facing young black thugs burdened with criminal records.

April brought us the exquisitely tiny dramas of students at Harvard, where the emotional perils of a radical poetry slam became all too apparent, resulting in one student’s claim of fearing imminent death. Meanwhile, students at Stevenson College were left “harmed” and traumatised by an insufficiently sensitive buffet. Thankfully, saner voices prevailed in the pages of the Guardian, where Deborah Orr explained, or rather asserted, that the only vital qualification for presidential office is the possession of a vagina, the “symbolic power” of which “transcends all else.”

In May, we witnessed the intellectual heft of the Guardian’s Polly Toynbee, including her belief that obesity isn’t chiefly a matter of inactivity and overeating but instead has a more pernicious cause, i.e., a lack of socialism: “It is inequality and disrespect,” we learned, “that makes people fat.” Though chunkier readers should note that waiting for a socialist revolution probably isn’t the best way to lose those extra pounds. We also pondered the deep ruminations of Marxist philosopher Adam Swift, who insists that reading to your children causes “unfair disadvantage” to the children of parents who are negligent and stupid, and should therefore induce feelings of guilt and discomfort. To our Marxist intellectual, being a competent, caring parent is something to atone for, being as it is an act of class oppression.

The Guardian’s Deborah Orr tells the unenlightened that Hillary Clinton should be elected president of the United States because she has ovaries and fallopian tubes, and that’s what really matters:

An opening for a feminist gag is what voting is all about.

I’ve never been a big Hillary fan. I don’t expect her to be the best president ever. In my book, anything more than competence would be a bonus.

Yes, if elected Mrs Clinton may be barely competent, and possibly much worse, but she would nonetheless be,

the perfect US president.

Why? Because Hillary is a she-person:

The symbolic power of her appointment transcends all else. Anyone who doesn’t understand that, in this one respect, Clinton is an absolutely perfect presidential choice, is simply refusing to acknowledge reality.

You heard the lady. We must vote based on a person having the right kind of genitals. It “transcends all else.” Because the “perfect US president” is one whose merits, so defined, are an accident of birth.

Via Stephen Hicks comes another staggering artistic triumph. In the cryptically titled Join or Die, San Francisco-based artist Justine Lai depicts herself getting busy with America’s deceased presidents. The results suggest a collision of 1970s porn magazines and painting by numbers. As the series of 18 x 24” canvases is being produced in chronological order, these necrophilic entanglements currently extend only to Ulysses S Grant and his hitherto unrecorded spanking fetish. Sadly, those of you aroused by the prospect of seeing, say, George W Bush getting it on with Ms Lai – with all the profundity that entails - may have to wait a while. 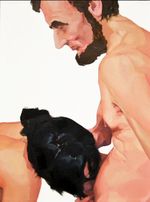 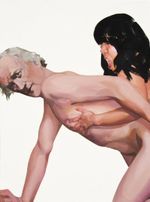 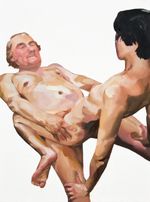 There is, given the subject matter, the usual mouthing of bollocks:

I am interested in humanizing and demythologizing the Presidents by addressing their public legacies and private lives. The presidency itself is a seemingly immortal and impenetrable institution; by inserting myself in its timeline, I attempt to locate something intimate and mortal. I use this intimacy to subvert authority, but it demands that I make myself vulnerable along with the Presidents. A power lies in rendering these patriarchal figures the possible object of shame, ridicule and desire, but it is a power that is constantly negotiated... I approach the spectacle of sex and politics with a certain playfulness… One could also imagine a series preoccupied with wearing its “Fuck the Man” symbolism on its sleeve. But I wish to move beyond these things and make something playful and tender and maybe a little ambiguous, but exuberantly so. This, I feel, is the most humanizing act I can do.

Somehow, I remain unconvinced that painting long-dead American presidents doing the nasty with a young woman is “subverting authority” in any meaningful sense. Nor am I persuaded that Ms Lai has “moved beyond” the “Fuck the Man” symbolism that evidently preoccupies her. Though one might note her eagerness to “insert herself” into the project - which raises the question of whether Ms Lai’s ego has merely led her to seek out celebrity by bedding powerful men, albeit figuratively. Readers will no doubt decide for themselves whether Ms Lai’s handiwork is “playful,” “tender,” “exuberant” and “humanising.” Though in fairness she has set up any number of dubious quips about “vice presidents,” “sexual congress” and “secretaries of the interior.”