The Gods, They Mock Us

Climate change activists chained themselves to the wrong building in the City of London after failing to realise the fossil fuel company they wanted to disrupt had moved address last year.

And yes, there is a punchline:

The group of 200 protesters instead brought chaos to the entrance of a building which houses the offices of a leading renewable energy company.

The protestors’ chanted demands include “No borders, no nations, no gas power stations.”

Readers are invited to marvel at the patchwork of seemingly incompatible concerns, and to ponder how, if at all, any of the protestors’ professed objectives could actually be met without nations, with borders, to implement them. Do they imagine that some borderless, undifferentiated and continually shifting mass of human beings with no common identity or common bond could function at all for any length of time, let alone in ways that they, or we, might find congenial?

Several Hurricane Irma victims called a 1-800 number for help and were offered phone sex instead of hurricane relief assistance.

The Miami Herald reported that the Federal Emergency Management Agency’s Region 4 office accidentally tweeted the number Wednesday, which offered assistance to people dealing with damaged roofs. The number was supposed to be a “1-888” number, not a “1-800” number.

You Think Your Day Was Bad?

A headline in the Want China Times.

A slurry tanker containing human waste suddenly burst spraying innocent bystanders and nearby shops in Hechi in southern China’s Guangxi Zhuang autonomous region on Saturday… Several bystanders and the sidewalk beside several shops in the city’s Jichengjiang district [were] covered in faeces while shop signs were slathered in foul slurry.

And yes, there are photos.

A zoo in Japan has been forced to admit that it tried to mate two male hyenas for four years, after mistakenly thinking that one of them was female… After the two animals struggled to reproduce, the zoo conducted a gender test under anaesthesia.

I’m tempted to ask just how valiantly they struggled. No laughing at the back.

Thick Carpeting Should Fix It

Two weeks before its scheduled completion, this hotel in Asan, South Korea, “abruptly tilted to one side.” 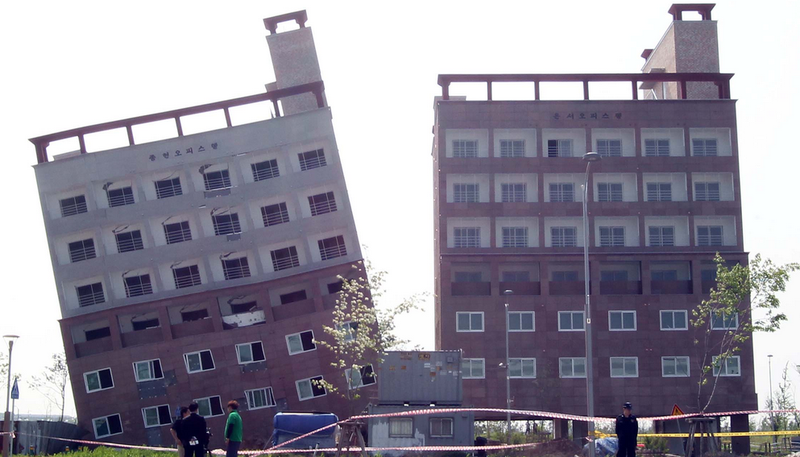