It’s called “the poverty defence,” and would not only make stealing legal, but apparently fencing items as well, and would cover over 100 misdemeanour crimes.

Because enabling criminals and demoralising their victims will result in flourishing neighbourhoods, a boom in employment, and a future that’s more progressive and compassionate. Full of hugs and puppies.

Update: via the comments:

As noted in the piece, the most enthusiastic supporters of the proposal, the ones disdaining objections as “anti-poverty bias,” are remarkably contemptuous of the people whose lives will be degraded, should the proposal succeed. And who almost certainly have a much clearer understanding of the proposal’s supposed beneficiaries, having encountered them first-hand, most likely more than once. But the compulsion to indulge criminal choices, from a safe distance, and to then bask in the subsequent in-group elevation, is, for some, quite strong, despite the contortions it can entail.

And regardless of the consequences for the victims of such posturing.

Above Us, Our Betters

Speaking, as we were, of enthusiasts of crime, meet communist poet Wendy Trevino: 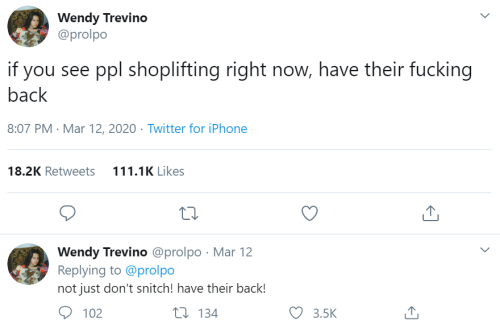 When I see tweets of this nature – repeated slogan, repeated slogan, repeated slogan – I tend to think the tweeter is either adolescent or unwell. Ms Trevino is supposedly a grown woman. One who appears to have a complicated relationship with her father. Sometimes the clichés are just too on-the-nose. When not advocating shoplifting and being titillated by visions of collapsing social norms, Ms Trevino, our communist poet and Antifa Gal, wants us to know how pleased she is by criminals escaping prison and taking hostages. What said prisoners may have done to be there in the first place, and what they may do again now that they’re at large, doesn’t seem to interest her.

Continue reading "Above Us, Our Betters" »

This is the nice version of what happens when the state justice system fails and private individuals must step in to fill the void. There is also a less nice version.

Over at Samizdata, Natalie Solent is pondering this item of crime and policing news. Or rather, non-policing news:

It was no surprise to anyone who knew Nicholas Richards, a career criminal with 25 convictions including 18 for shoplifting, that his motives were not entirely honourable when he walked into Boots. Witnesses described him stealing £170-worth of Gucci perfume; CCTV footage recovered from the chemist’s flagship branch in Piccadilly showed him putting the goods in his bag; and cameras worn by private security officers who detained him recorded him admitting the offence.

So staff at Boots, which loses between £10,000 and £12,000 a week to shoplifting, were upset when police officers arrived on the crime scene, decided the case was a “civil” matter and released Richards, who was already on a suspended sentence for theft. Boots was furious about the failure to dispense justice and decided to take part in what is believed to be the first private prosecution for shoplifting supported by a corporate victim.

The case is being brought by TM Eye. Set up by two former Metropolitan police officers, it is the parent company of My Local Bobby (MLB), which provides neighbourhood policing to residents, firms and shops. Its 30 “bobbies,” who wear red vests and caps, provide 24-hour cover. They are mostly former police officers and soldiers.

In the comments following which, a reader adds,

Anyone with 25 previous convictions should not be on our streets.

Some time ago, I suggested, not entirely flippantly, that a “three-strikes-and-we-put-you-out-to-sea-on-a-fucking-raft” policy might be quite popular. Readers are welcome to use the comments below to share alternatives.

When they put up the posters [advertising the event]… the campus completely melted down. They had two campus-wide meetings attended, according to reports, by hundreds of students, faculty, and administrators about what to do with me coming to campus... The rumours were spread - not just rumours, emails, including from the student government - that I was a white supremacist coming to campus with my white nationalist followers to target minorities… They organised safe spaces for my visit. They organised safety teams to guide people to safe spaces with glow sticks if they couldn’t find the safe spaces. In the library, which was the main safe space, they had colouring books for students—college students. It was the craziest thing.

Other subjects touched on include blogging versus Twitter, and the Oberlin College / Gibson’s Bakery court case:

It’s just an example of a powerful left-wing entity, which essentially runs the town and is not used to people standing up to it, and which has reacted, in my view, completely irrationally… Oberlin moved to transfer the case out of… their home county, because they didn’t think they could get a fair trial… I think that should tell you something of the bubble that the college community is.

Professor Jacobson explains the Oberlin saga in more detail in this video.

Readers unfamiliar with the incident and its elaborate, rather farcical inversions of reality, can find a short but informative overview here. As I wrote at the time,

It’s worth noting that Oberlin College is the Clown Quarter writ large, a leftist fiefdom, where woke psychodramas are normative, encouraged and institutional. And hence the delinquency and moral inversion - the ripened fruit of all that leftist psychology. Such that students were encouraged by staff to side with a trio of physically aggressive shoplifters - people stealing for fun - and to actively destroy the livelihood of a baker who would rather not be preyed upon by thieves. The expectation of lawfulness, of common civility, being repaid with libel, harassment and ruin. Activities that Oberlin’s administrators were happy to enable, using college funds, and often with bizarrely adolescent behaviour of their own.

Daniel McGraw on the self-inflicted sorrows of Oberlin College:

Activists on campus immediately concluded the arrest of the three students was evidence of racial profiling, which suggests an assumption that either the students were falsely accused on account of their race, or that Gibson’s [Bakery and Market] was happy to allow whites to shoplift but drew the line at blacks. I heard versions of these two theories during interviews I conducted with dozens of the student protesters. But, despite the students’ claims and the vehemence of the language with which they were made, police and others testified that there had been no complaints or allegations of racism made against the family business since it opened in 1885. Not one. […]

As the protests continued, Gibson’s annual revenue almost halved… Eight full-time employees were reduced to one, and family members have had to forego their salaries (and still do, pending the receipt of damages) since the protests began. The Gibson family testified that all they wanted was for Oberlin College to send an email to the community affirming that Gibson’s was not racist and to move on. But the school refused and doubled down on its support for the protesters and their defamatory allegations.

Oberlin’s decision to double-down seems in part an attempt to deflect Mao-ling discontent at the college’s own supposed sins of “imperialism, white supremacy, capitalism, ableism, and a cissexist heteropatriarchy.” Having encouraged students to cultivate woke psychodramas at every turn, the ensuing hostility had to be pointed somewhere. Which rather speaks to the character of those involved.

David Gibson, owner of the besieged bakery, shares his account of events here:

Police arrested the student. But the next day, hundreds of people gathered in protest. From bullhorns they called for a boycott. The sidewalk and park across the street from our store were filled with protesters holding signs labelling us racists and white supremacists. The arrest, they said, was the result of racial profiling. The narrative was set and there was no combating it… The shoplifter confessed to his crime and said the arrest wasn’t racially motivated. But Oberlin College refused to help set the record straight by issuing a public statement that our family is not racist and does not have a history of racial profiling or discrimination. The damage had been done. And the truth seemed irrelevant.

Inevitably, Oberlin’s student newspaper lays blame elsewhere, denouncing the media and an “increasingly authoritarian country” - one in which “sustained and brave student activism” - i.e., vindictive hysteria and attempting to destroy the livelihoods of entirely innocent people – might become more difficult and even have consequences. At which point, the words that come to mind are lefties project.